On cloud nine! Nick Viall gushed about his girlfriend, Natalie Joy, weeks after news broke that they are dating.

While Viall did not name his girlfriend, he told his guest, Esther Povitsky, that “she’s in healthcare” and works as “a surgical tech,” a job that he admittedly can’t wrap his head around.

“What I like about [her line of work] is I know nothing about it,” he said. “I couldn’t do it. I can’t speak to it. I can’t even try to sound smart to it. And that’s really quite impressive.” 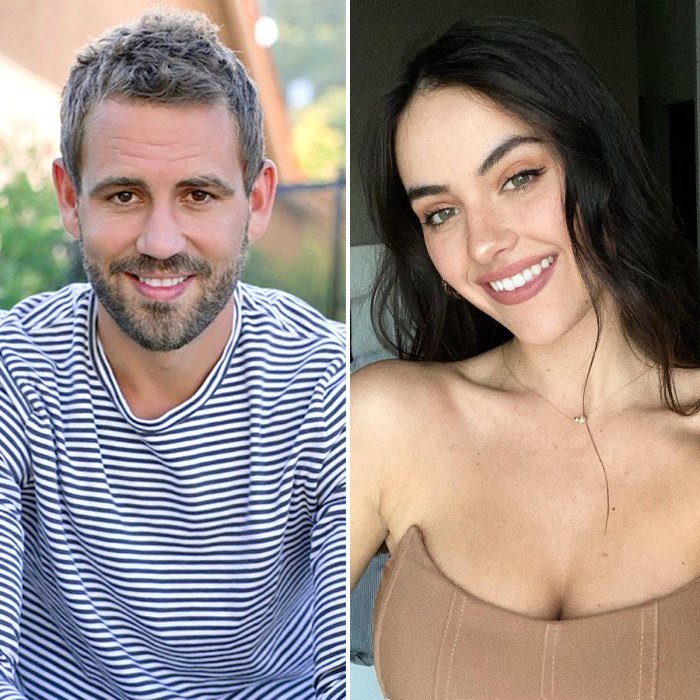 After raving about Joy, whom he called “very confident” and “passionate about what she does,” the Wisconsin native revealed the modern way that the couple met.

“She slid into my DMs. It was very romantic,” he said with a laugh, telling Povitsky, 32, that he and Joy “both had reluctance” at first about whether they should become boyfriend and girlfriend. “We kind of kept hanging out, and she finally got a point where she was like, ‘I want to date,’ and I was kind of like, ‘I don’t know.’ … She just was like, ‘OK, this is what I want. It’s fine, no big deal, but I’m gonna go do my thing,’ and she did, and I was like, ‘What?!’ … She went and showed me exactly what I’d be missing.”

Since making their relationship official, Viall has fallen for Joy rather quickly.

“There are moments of like, ‘You’re really great, and I’m really happy you’re a part of my life’ thoughts, for sure,” he said on his podcast, calling the essential worker “the voice of reason, which is a breath of fresh air.”

The former reality star went on to compliment his love’s character, telling listeners, “It sounds so cheesy … but she does make me want to be better. … Everyone loves her. Without question, everyone likes her more than me. All of my friends. Without question. And it makes me a little bit insecure about myself.”

Joy went Instagram official with Viall on January 27 by sharing a video of him playing a virtual reality game as she tried to give him a kiss.

A source later told Us Weekly exclusively, “Nick and Natalie have been very coy about their relationship. He’s not one to just divulge his love life, especially after everyone witnessed his public breakups and what he’s gone through on national TV. Their relationship is very real. They’ve been dating since the beginning of COVID but have just started going public. They’re pretty much inseparable. You can say she practically lives with him because she’s at his house that much.”

Viall, who was first linked to Joy in 2019, previously dated Andi Dorfman and Kaitlyn Bristowe on The Bachelorette and was engaged to his Bachelor winner, Vanessa Grimaldi, in 2017.

Mom ‘went to bed instead of helping son, 5, as boyfriend killed him’