“My Valentine.♥️,” the quarterback, 25, wrote via Instagram on Sunday, February 14, alongside a photo with Bouchard, 26, at the beach.

The couple celebrated the holiday with a “quick vday getaway” to Cabo San Lucas, Mexico, according to the Canadian tennis player’s Instagram account. 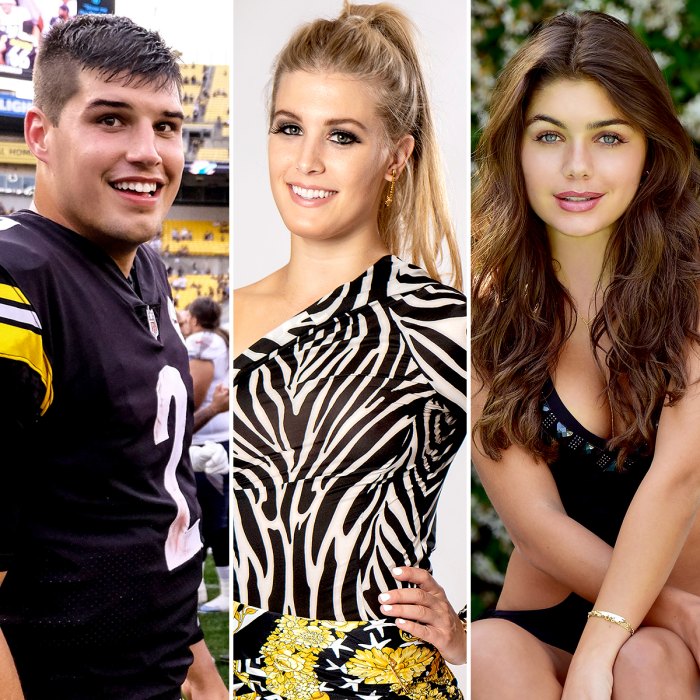 Bouchard showed off the pair’s romantic hotel room — although she didn’t share any photos with Rudolph — via her Instagram Story on Monday, February 15. Her video showed a dozen flowers on a countertop in the suite alongside a bottle champagne and a gift bag. There were also single-stemmed roses in the bathroom.

After becoming Instagram official over the weekend, Rudolph received some love from fellow athletes, including his Steelers teammate Zach Banner.

“So many broken hearts … Don’t worry, I’ll be their crying shoulder,” the University of Southern California alum, 27, wrote in the comments.

Last year, Rudolph was rumored to be seeing Sluss, shortly after she split from The Bachelor’s Peter Weber ahead of the season 24 After the Final Rose episode in March 2020.

The former Oklahoma State University quarterback was spotted with Sluss, 24, on a coffee run in Los Angeles in April. TMZ reported at the time that the pair appeared to be “lovey-dovey.”

The Tennessee native sparked relationship speculation around the same time when she teased that she was talking to a “mystery man” who she had a FaceTime date with. Sluss called it a “nice little quarantine fling.”

The model won Weber’s heart during The Bachelor‘s 2020 season and the pair got engaged. Weber, 29, called off the engagement, however, in hopes of pursuing a relationship with runner-up Madison Prewett, who left the show early.

The pilot’s romance with Prewett, 24, was short-lived and he was linked to contestant Kelley Flanagan in April 2020, when Us Weekly exclusively revealed that the duo were seeing each other.

The pair announced their split in December 2020, shortly after announcing their plans to move to New York City together. Weber and the lawyer, 28, were spotted together in Tampa, Florida, earlier this month during Super Bowl weekend.

“Peter and Kelley have been communicating since they both went their separate ways after the Super Bowl,” a source exclusively told Us this month, noting that they are “not back together.”

Teen Mom Jade Cline admits she wants to adopt a child when daughter, Kloie, 3, is about ‘five or six’