Family first. Piers Morgan spoke out for the first time after his controversial comments about Meghan Markle resulted in him exiting Good Morning Britain earlier this month.

The English journalist defended his kids in an article for the Daily Mail on Sunday, March 28, claiming they’ve been harassed following his actions against the former Suits actress, 39, in which he said he didn’t “believe a word she says” after her tell-all interview with her husband, Prince Harry, where she claimed she faced racism while living in the U.K. and she contemplated suicide amid her time as a senior royal.

“I’ve always subscribed to the ‘If you dish it out, you’ve got to take it’ philosophy,” Morgan, 55, wrote as part of the Mail on Sunday publication. “But my three sons told me they too are all being targeted and sent me screenshots of venomous abuse and threats of violence towards them.” 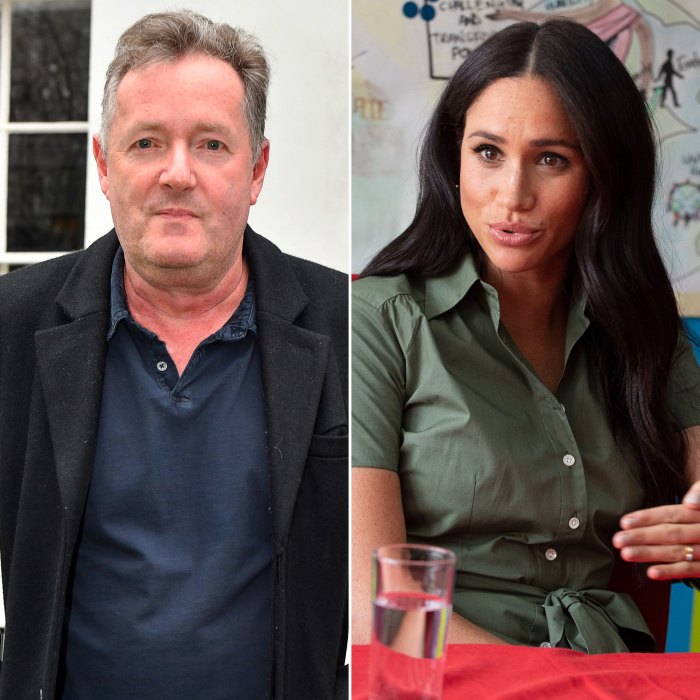 The TV personality said the harassment toward his sons, Spencer, 27, Stanley, 23, and Albert, 20 with ex-wife Marion Shalloe, made his stomach “churn,” adding that police are already investigation a death threat made against his eldest son, Spencer, last month.

“None of them even care about Meghan Markle, let alone agree with my views on her,” he continued. “Yet the Twitter troll mob has found them guilty by association. One troll vowed to murder me in front of them, and added: ‘When your dad dies, the world will have a party.’”

Morgan, who also shares 9-year-old daughter Elise with wife Celia Walden, walked off the set of Good Morning Britain on March 9, over backlash for his remarks about Markle’s after she revealed she had suicidal thoughts while pregnant with son Archie.

He said on Sunday that people called him “racist” and claimed he was “mocking mental illness” by not believing Markle’s statements. “It didn’t matter that I’ve never said anything racist about her or that my only comments about her race have been to repeatedly say how great it was that a bi-racial woman married into the royal family,” Morgan wrote. “No, it appears that questioning Meghan’s fork-tongued ‘truth’ is now a racist hate crime.”

Markle, for her part, made a formal complaint against Morgan after his on-air remarks. “The Duchess of Sussex formally filed a complaint to @ITV on Monday. It’s thought to have been sent to the broadcaster’s CEO,” ITV News’ royal editor Chris Ship tweeted on March 10. “Meghan raised concerns about how @piersmorgan’s words affect the issue of mental health and what it might do to others contemplating suicide.”

Following his talk show departure, longtime friend Sharon Osbourne defended Morgan. She later publicly apologized for her comments after she got into a heated debate with Talk cohost Sheryl Underwood during the show’s March 10 episode. She later made headlines for allegedly making racist remarks about past Talk cohost Julie Chen. The British host denied all of the allegations telling the Daily Mail on March, “It’s all crap.”

CBS announced on Friday, March 26, that Osbourne will not be returning to The Talk after cohosting the series for 11 seasons. “As part of our review, we concluded that Sharon’s behavior toward her cohosts during the March 10 episode did not align with our values for a respectful workplace. We also did not find any evidence that CBS executives orchestrated the discussion or blindsided any of the hosts,” the statement obtained by Us Weekly read. “At the same time, we acknowledge the network and studio teams, as well as the showrunners, are accountable for what happened during that broadcast as it was clear the cohosts were not properly prepared by the staff for a complex and sensitive discussion involving race.”

Morgan addressed Osbourne’s exit on Sunday as well, writing, “It’s outrageous, but what’s happened to Sharon and me in the past fortnight isn’t really about Ms Markle. She’s just one of many whiny, privileged, hypocritical celebrities who now cynically exploit victimhood to suppress free speech, value their own version of the truth above the actual truth, and seek to cancel anyone that deviates from their woke world view or who dares to challenge the veracity of their inflammatory statements.”