IT seems Mrs Hinch can do no wrong in the world of cleaning and organising – and now the Instagram star has revealed her top five cleaning must-haves for an immaculate home.

What’s more, Sophie Hinchcliffe, who’s pregnant with her second child, has been busy prepping a nursery for her new bub, and has offered fans a glimpse of the new look, including her top newborn essentials. 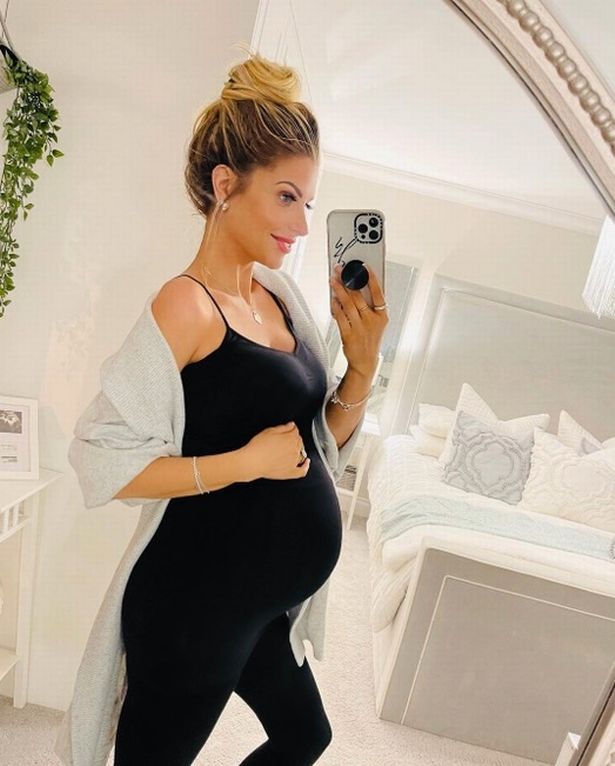 Mrs Hinch, aka Sophie Hinchcliffe, is pregnant with her second childCredit: Mrs Hinch/Instagram

When it comes to cleaning products, we dare say there’s nothing the cleanfluencer hasn’t tried, so picking her favourites is a pretty big deal.

Known for cleaning tips and tricks, Mrs Hinch answered a fan question on her Instagram stories, admitting “this was hard for me”.

But she soon revealed to her four million followers that Dettol spray and Zoflora made the cut – particularly the Spring Awakening scent.

The popular disinfectant cleans your home and leaves it smelling fresh, and is used by the cleaning star for EVERYTHING. 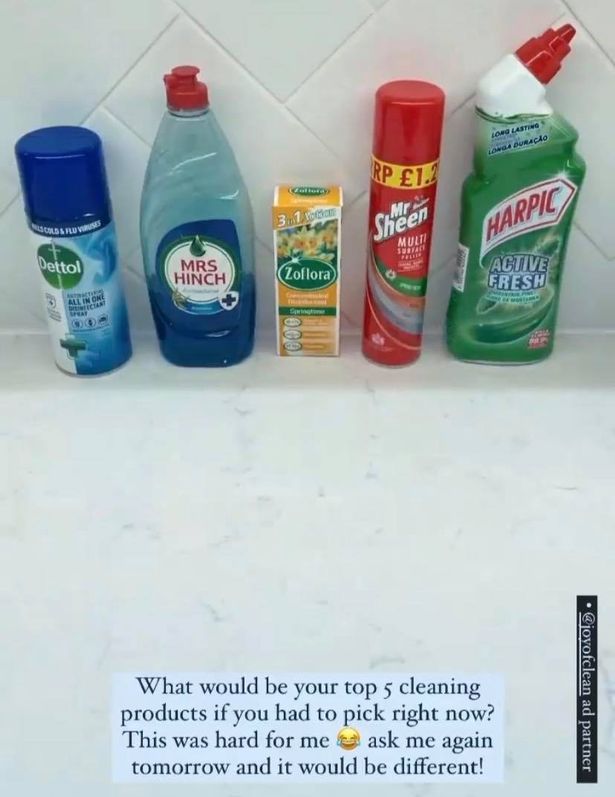 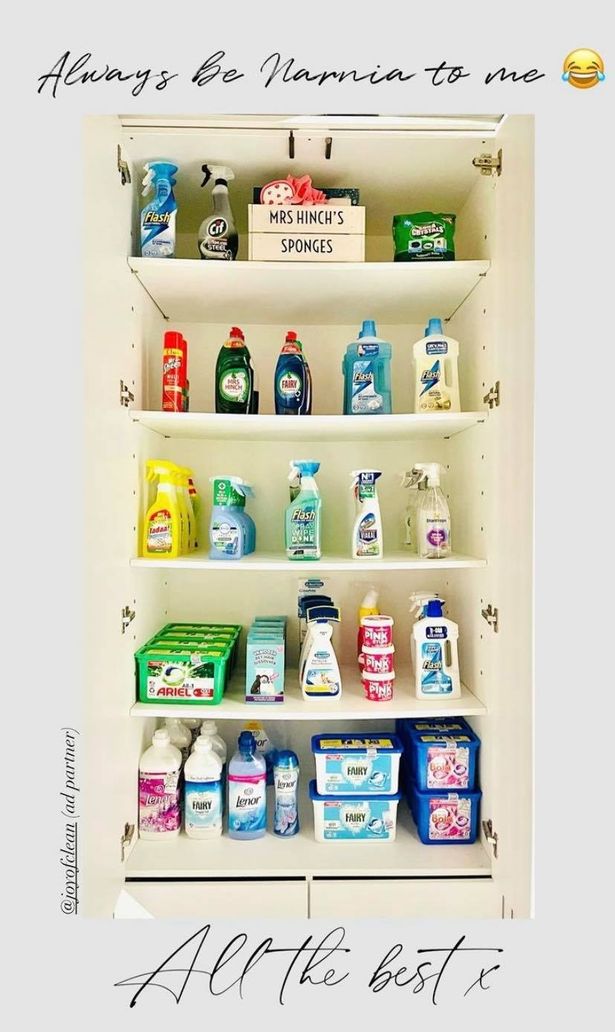 Known for her cleaning tips and tricks, there’s nothing the cleanfluencer hasn’t triedCredit: Instagram

Meanwhile, Dettol all-in-one is a good all-rounder which can be used to clean hard surfaces and upholstery.

Making up the rest of her top five is Fairy washing up liquid, Mr Sheen and Harpic loo cleaner – all versatile products loved by her fans.

With so much cleaning of her stunning Essex-home, it’s surprising the mum-of-one as spare time on her hands.

But with another little boy soon to join Sophie, her husband Jaimie and their son Ronnie, her priorities have certainly shifted.

Just yesterday, the 31-year-old showed off the new baby bits she picked up in preparation for the new arrival, including a handy double pram for both her boys. 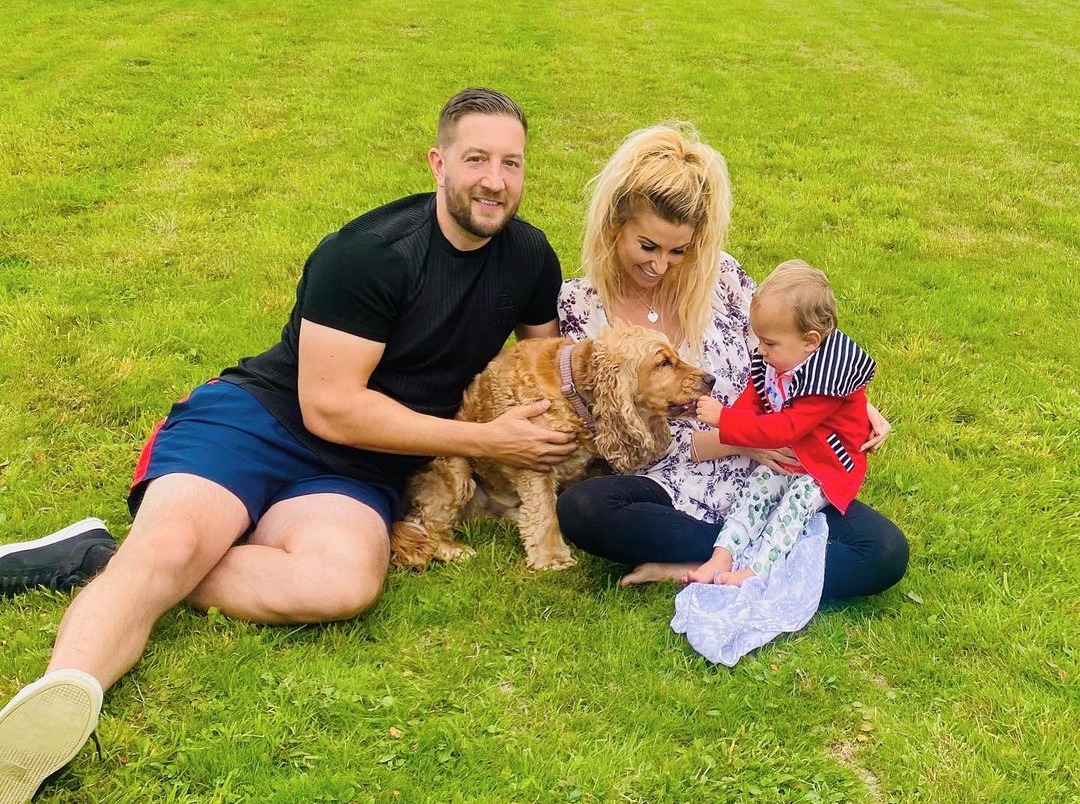 Mrs Hinch and her husband Jamie live in Essex with their son Ronnie and dog HenryCredit: Instagram 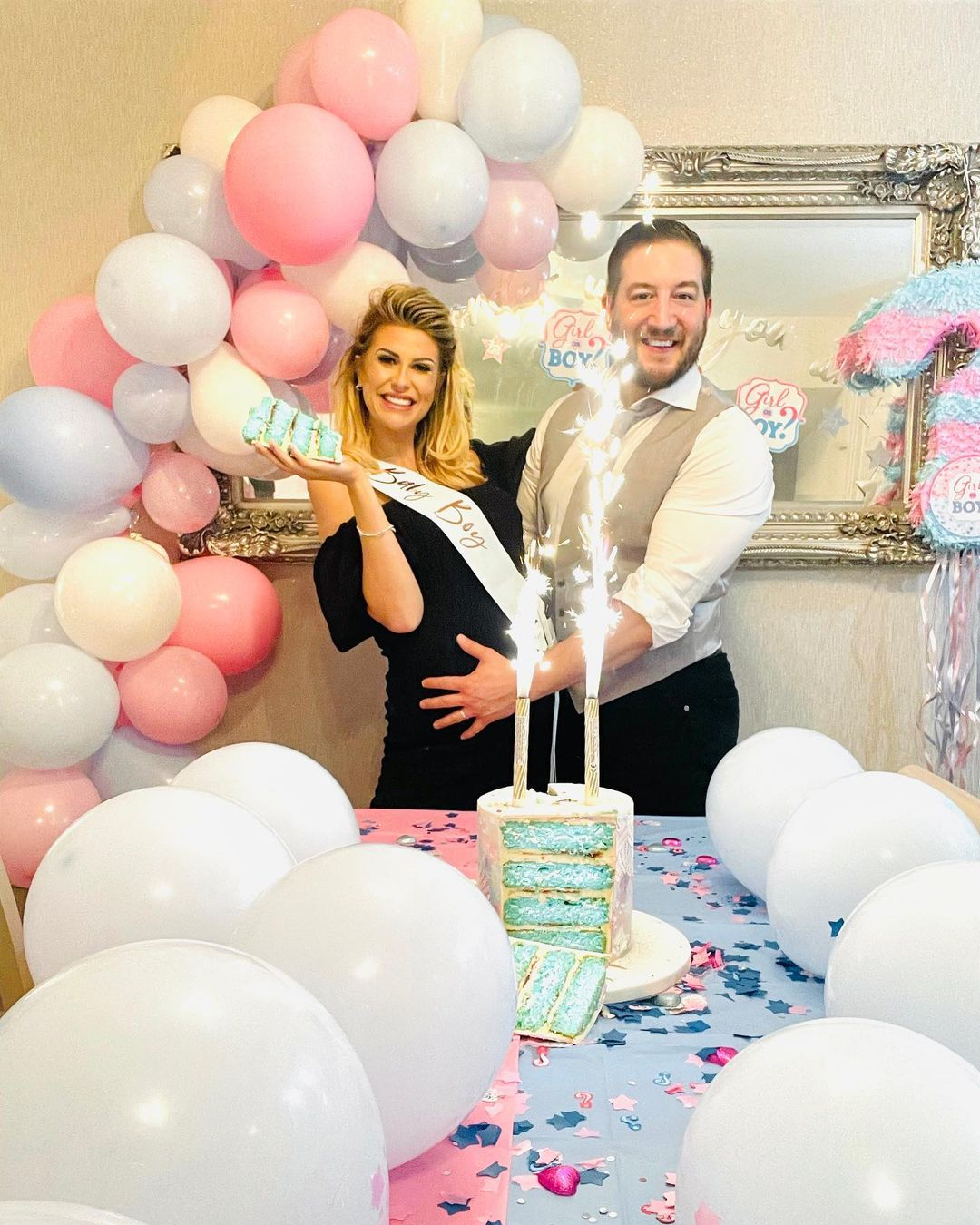 The couple revealed they are having another boy at their baby shower in FebruaryCredit: Instagram

“This morning is exciting guys! Had the delivery of our final baby bits. And I can’t wait to play with it all. Ron’s been helping,” she wrote on her Instagram stories, adding that she’s now part of the “double pram gang”.

Mrs Hinch opted for the gazelle S stroller by Cybex which comes with two seats – one for her one-year-old son Ronnie and the other for the new tot.

She said: “It’s so light and easy to push, I’m so pleased and it comes with its own basket. What more do you need?”

The pregnant mum-of-one also shared a clip of Jamie putting together a highchair for the new baby which is identical to his big brother Ronnie’s.

She penned: “Everything feels so close now. Jamie put together our second Tripp Trapp chair today. 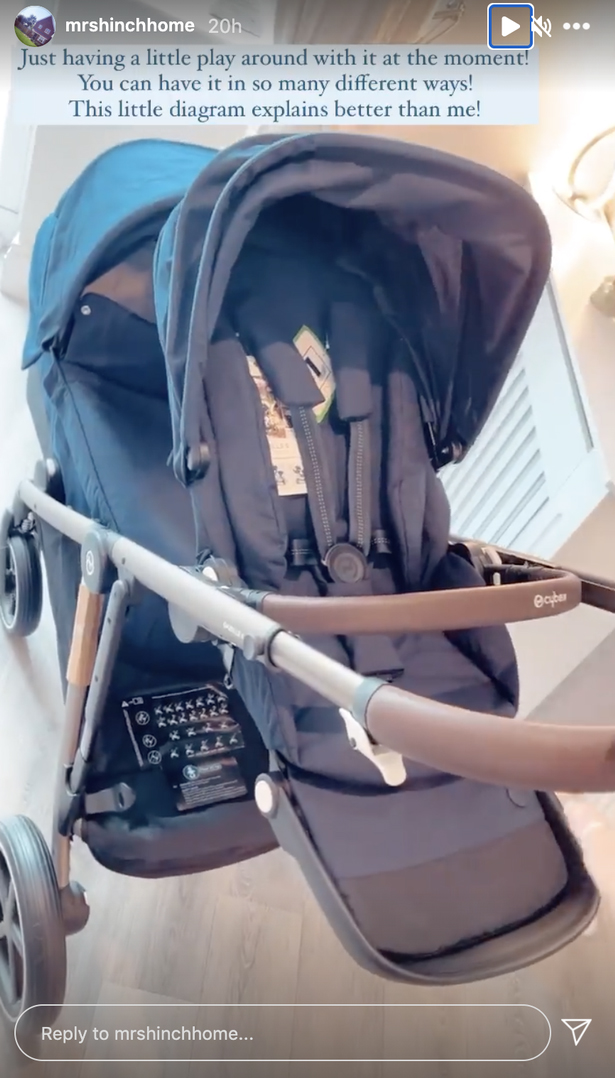 The soon-to-be mum-of-two showed off her new double pram which has a seat for both Ronnie, one, and the new bubCredit: Instagram 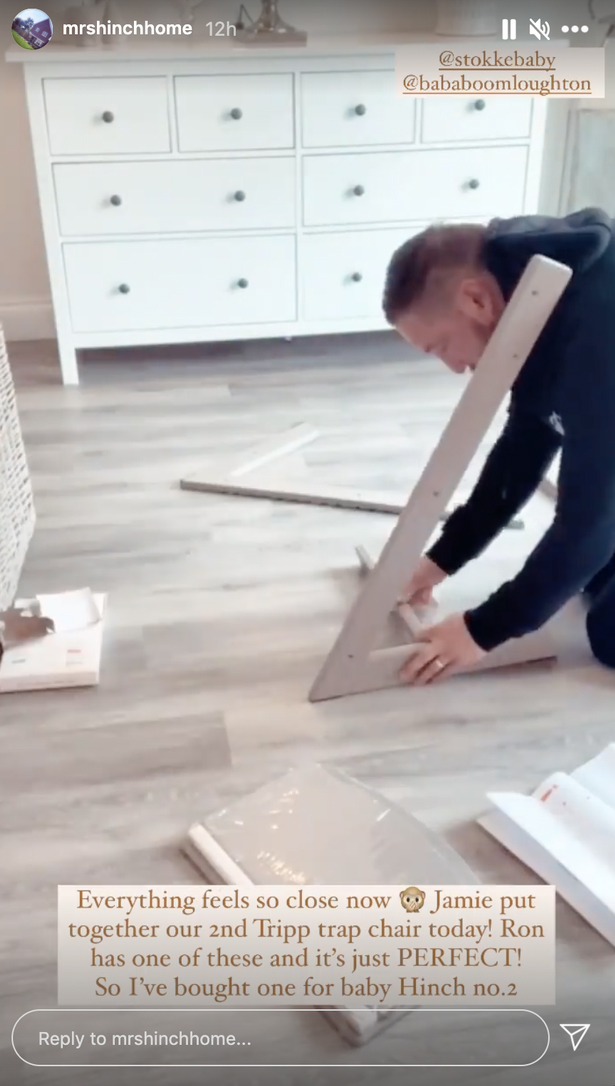 Jaimie helped put together a new high chair for the new totCredit: Instagram 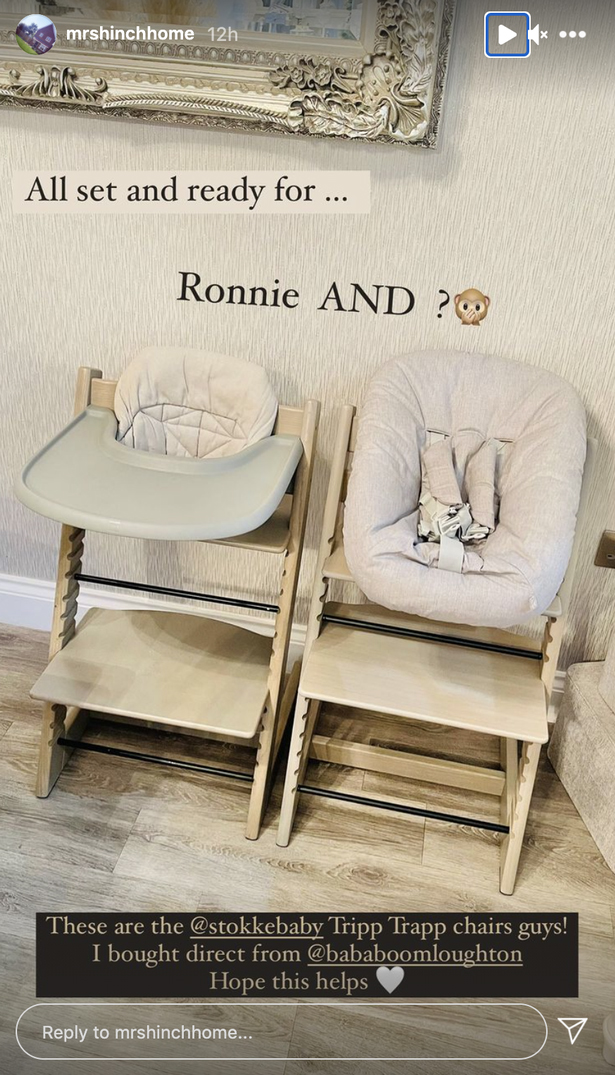 Ronnie and his little brother now have matching chairsCredit: Instagram

“Ron has one of these and it’s just PERFECT. So I’ve bought one for baby Hinch No. 2.”

Moving into the nursery the cleaning star revealed that she’s decked it out with eBay bargain and H&M buys.

Speaking in a previous video, the cleanfluencer said “Just thought I’d share a couple of bits I bought recently for the nursery guys.”

Sophie, who is already to mum to one-year-old Ronnie, shared her H&M home buys including a bear shaped rug for just £25 as well as some matching pencil pots.

“This rug from H&M – I love it! It’s that jute material I believe,” she said. 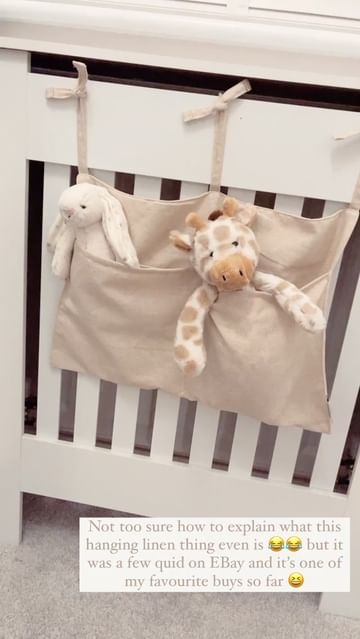 The baby’s nursery is filled with cute buys from eBay 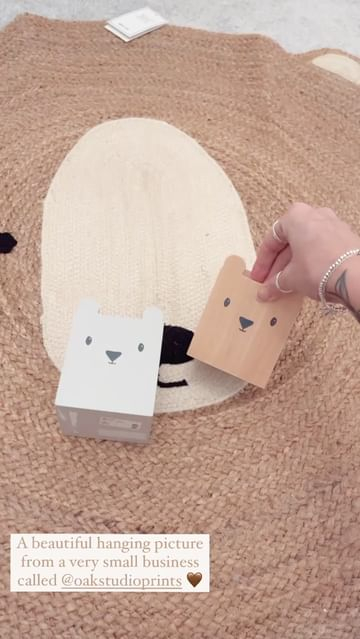 Mrs Hinch shopped at H&M home for baby bits too

The mum-to-be has chosen a rabbit theme for the space, having previously showcased samples of wallpaper with a bunny print.

Adding to the theme, she picked up a sweet wall-hanging from Oak Studio, printed with the words “Sleep Little Bunny.”

While searching eBay, one of Sophie’s favourite shopping spots, the mum nabbed a linen storage pouch for just a couple of quid.

She said: “I bought this on eBay for a few pounds, I don’t know quite how to explain what it is. It’s like a linen hanging pouch and you can pop little bits in it.

“It was only a few quid and I really like it.” 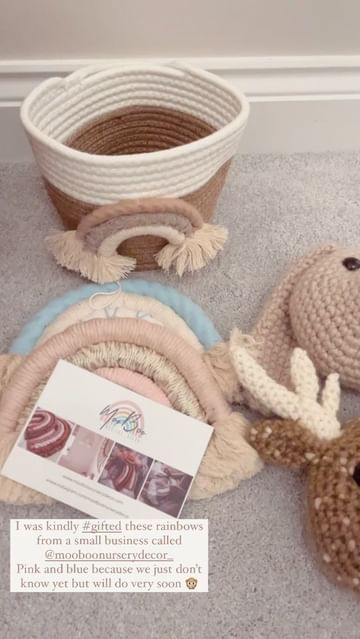 She’s going with a neutral theme, different from her usual grey

Mrs Hinch was also lucky enough to be gifted some felt rainbows by the company Mooboo Nursery.

She added: “I have a pink and a blue because we just don’t know yet, but we will do soon.”

Sophie, 31, and husband Jamie are already parents to Ronnie, who was born in June 2019.

Meanwhile, we shared how to save THOUSANDS on a celeb-inspired nursery – from Khloe Kardashian to Sam Faiers & Mrs Hinch.

Plus Mrs Hinch was in tears as she shares transcripts of abuse from vicious trolls – but claims police say it ISN’T harassment.

And in other news Mrs Hinch has launched new homeware range at Tesco and prices start from just £1.50.