Tale as old as time. Meghan Markle‘s ups and downs with her father, Thomas Markle, aren’t a new development — according to an old flame.

“I knew her dad growing up as kids,” Joshua Silverstein, an ex-boyfriend of the 39-year-old Suits alum, told Us Weekly exclusively on Monday, March 29. “I didn’t see him often … but I did know that Meghan’s relationship with her dad was complicated and I understood that as most teenager-to-parent relationships are.”

Silverstein noted that he had a closer connection to Doria Ragland, the duchess’ mom, who split from the 76-year-old lighting director in 1987. However, he was still able to notice the “challenging” dynamic between Meghan and her dad amid her parents’ separation. 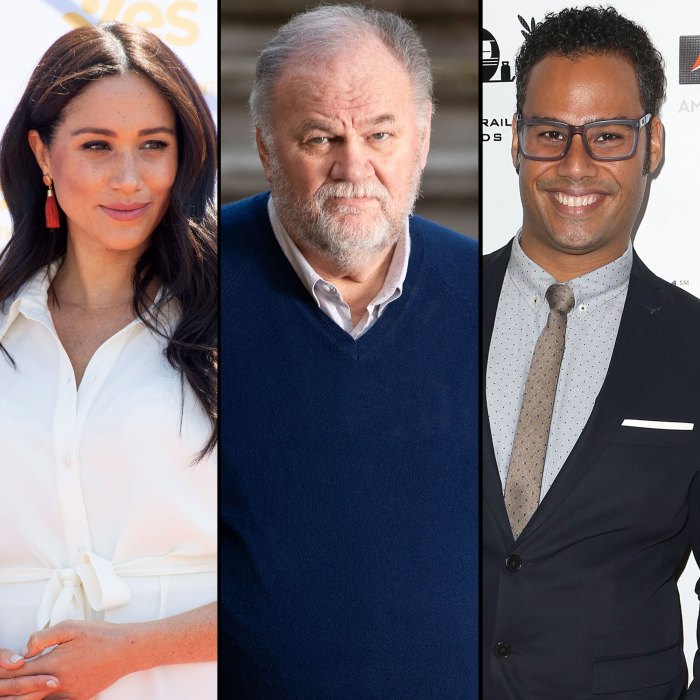 “Being there when Meghan’s parents were divorced at that time … it’s hard raising your kids without the secondary parent,” the Braid Theater performance artist told Us. “It’s all challenging. I don’t think there was anything specifically surprising to find out at that time because there were a lot of people that I knew [who] had challenging relationships with their parents. But I did know about it.”

While he admitted that he “couldn’t speak to the specificity of what Meghan went through” with Thomas, Silverstein recalled having “very cordial” interactions with the Daytime Emmy winner. Their relationship as father and daughter “might have been strained” at the time as a result of the divorce — and Silverstein has been saddened to watch them grow more distant.

“I think at the end of the day, we’re all human beings and we all have to create boundaries with people that we may not want to create boundaries with … but at the end of the day, you have to do what’s best for you and your family,” Silverstein, who is directing a virtual summer session at Cazadero Performing Arts Family Camp, continued. “If that means creating a boundary with your parents, sometimes that’s what you have to do.”

Earlier this month, the Tig founder opened up about her dad during a sit-down interview on CBS with her husband, Prince Harry. The friction began to gain attention in the British press ahead of the pair’s May 2018 nuptials, which Thomas did not attend after claiming he had a heart attack following his paparazzi scandal.

“I grieve a lot,” Meghan said in the tell-all, which aired on March 7. “I mean, I’ve lost my father. I lost a baby. I nearly lost my name. I mean, there’s the loss of identity. But I’m still standing, and my hope for people in the takeaway from this is to know that there’s another side.”

The philanthropist recalled in an unaired clip that her family and friends were given a “very clear directive” to not address her relationship with Harry, 36, when they started dating in 2016. However, Thomas frequently talked about the couple in public, causing even more tension.

“There was such an obsession about anything in my world, including tracking down my parents. And I did everything I could to protect both of them in that media frenzy,” she explained. “But for over a year, the U.K. tabloids were trying to find my dad, offering people so much money to try to find his address. Once they did, I remember being told, there was a huge headline, like, ‘We found him!’ or ‘We’ve got him!’”

Meghan, who’s currently pregnant with her second child, noted that her perspective on the scandal has shifted since welcoming son Archie in May 2019. “I genuinely can’t imagine doing anything to intentionally cause pain to my child. I can’t imagine it. So it’s hard for me to reconcile that,” she said.

Thomas, meanwhile, said on Good Morning Britain after the bombshell interview aired that he tried calling his daughter and Harry “at least 100 times or so” to explain himself.

“Bottom line is I’ve never heard back from Meghan or Harry in any way, shape or form,” he claimed. “I would love to hear from them. … I’ve been pushed around and knocked down for one thing I did, one big mistake I made.”

Dying groom sobs as he marries wife outside hospital treating him