Meghan Markle got honest about her relationship with sister-in-law Duchess Kate in her tell-all interview on CBS alongside Prince Harry on Sunday, March 7.

Meghan was asked about a moment during the lead up to her 2018 wedding to Harry when Kate reportedly was in tears after a disagreement with Meghan over Kate and Prince William‘s daughter Princess Charlotte‘s bridesmaid dress. 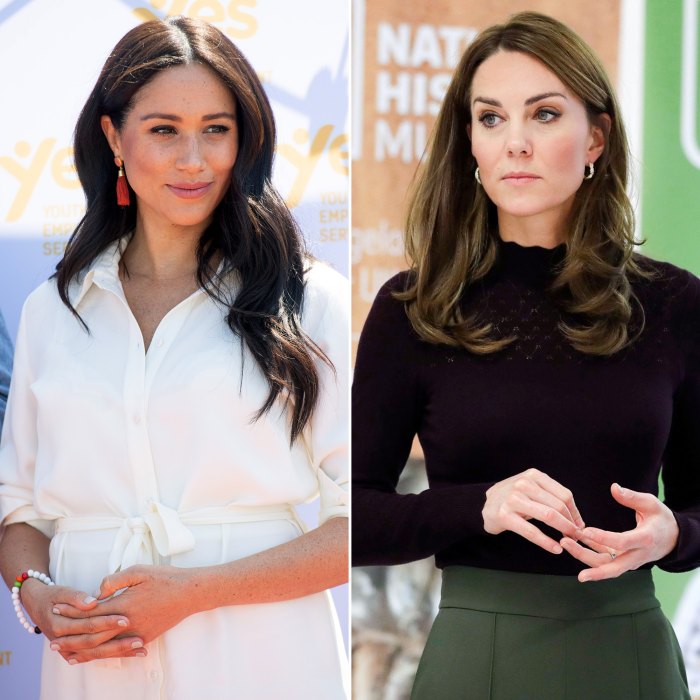 “That was a turning point,” Meghan said on Sunday about the news stories that sprang up about the incident six months after it actually happened. “The narrative with Kate, it didn’t happen.” She added that “the reverse happened” and it was the bride-to-be who ended up in tears.

“It was a really hard week of the wedding,” Meghan explained. “And she was upset about something, but she owned it, and she apologized. And she brought me flowers and a note, apologizing. And she did what I would do if I knew that I hurt someone, right, to just take accountability for it.”

“What was hard to get over was being blamed for something that not only I didn’t do but that happened to me,” she continued. “Everyone in the institution knew it wasn’t true…. I’m not sharing that piece about Kate in any way to be disparaging to her. I think it’s really important for people to understand the truth.”

“She’s a good person,” Meghan continued. “And I think so much of what I have seen play out is this idea of polarity, where if you love me, you don’t have to hate her. And if you love her, you don’t need to hate me.”

Asked if she felt she was held to a different standard to the Duchess of Cambridge, Meghan replied, “I don’t know why. I can see now what layers were at play there…. They really seemed to want a narrative of a hero and a villain.”

The former Suits star, 389, and her husband, 36, opened up in the two-hour special about the reasons they decided to step back as senior royals, their new life in California, Meghan’s pregnancy and their future projects.

While Kate, 39, and Meghan seemed to hit it off when the actress was introduced to her as Harry’s girlfriend in January 2017, there were rumors of a growing rift between the pair as the months and years rolled on.

Back in February 2018, the pair were seen laughing together at their first joint royal engagement with Harry and his brother, Prince William, with Harry speaking about the foursome’s close relationship at the time.

“I think it’s really good that we’ve got four different personalities,” he said. “You know, we’ve all got that same passion to want to make a difference. But [we have] different opinions, and I think those opinions work really, really well [together]. Working as a family does have its challenges. Of course it does. … But we’re stuck together for the rest of our lives.” Meghan added that the two couples, who teamed up for their Royal Foundation nonprofit, were “togetherness at its finest.”

A month later, a source told Us Weekly that Meghan and Kate’s relationship had blossomed into a “firmly established, wonderful friendship,” as the future queen helped Meghan to adjust to her future life as a royal.

By the end of 2018, after Harry and Meghan announced they were expecting their first child, reports were circulating that there was a feud between the duchesses.

“Are they the best of friends? No. Do they speak every waking second? No. Do they hate each other? Absolutely not,” an insider told Us. But a second source noted in September 2019 that the pair could never really connect on a deeper level because they are “from two totally different worlds.”

The following month, Harry opened up about a rift with his big brother in a candid interview while the couple and their infant son, Archie, were on a royal tour of Africa, saying that they were on “certainly on different paths at the moment” and had “good days” and “bad days.”

In January 2020, the couples’ relationship took another major hit when Harry and Meghan announced their plans to take a step back from their roles as senior royals. A source told Us at the time that the California native and Kate “barely speak” anymore.

The brothers and their wives saw each other in public for the first time in four months at the Commonwealth Day Service at Westminster Abbey in London in March. While Meghan smiled and said hello to Kate and William, the Duke and Duchess of Cambridge barely interacted with the couple.

An insider told Us earlier this year that the brothers had reconnected via video chat over the holidays, but “they’d reached an impasse,” with their fractured relationship being “a roller-coaster for everyone involved.”

After news broke that Meghan and Harry were set to do a tell-all TV interview, a source told Us that William and Kate were “appalled.”

“It’s just beyond the pale for William and Kate, especially in light of the dreadful timing with [Harry’s grandfather Prince] Philip in the hospital,” the insider added. “They are utterly aghast.”

In the queen’s Commonwealth Day address, which aired hours ahead of Harry and Meghan’s interview on Sunday, the British monarch called for unity amid difficult times. Royal commentators have suggested that she was sending a message not only to all the countries of the Commonwealth but to members of her own family.