Facing the consequences. Marilyn Manson was dropped by his record label, Loma Vista Recordings, after Evan Rachel Wood accused him of “horrifically” abusing him throughout their relationship.

“In light of today’s disturbing allegations by Evan Rachel Wood and other women naming Marilyn Manson as their abuser, Loma Vista will cease to further promote his current album effective immediately,” a Twitter statement from the label read on Monday, February 1. “Due to these concerning developments, we have also decided not to work with Marilyn Manson on any future projects.” 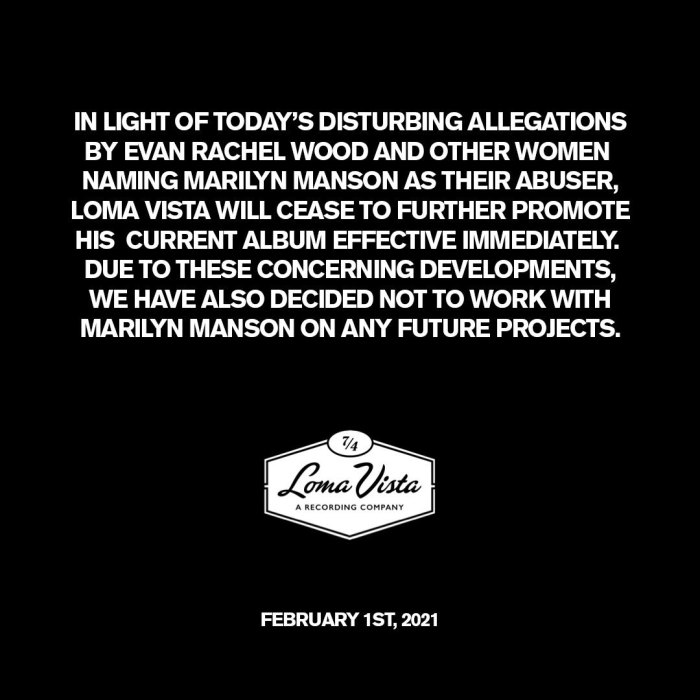 The 52-year-old Grammy nominee has released three albums through Loma Vista since 2015, including We Are Chaos, which came out in September 2020. He is no longer one of the artists featured on the label’s website. The company’s announcement came hours after Wood, 33, claimed that Manson abused her before their 2010 split.

“The name of my abuser is Brian Warner, also known to the world as Marilyn Manson,” she alleged in a powerful Instagram statement on Monday. “He started grooming me when I was a teenager and horrifically abused me for years. I was brainwashed and manipulated into submission.”

The former couple went public with their controversial romance in early 2007, when the Westworld actress was 19. Manson proposed in Paris in January 2010, but the pair called off their engagement less than one year later. 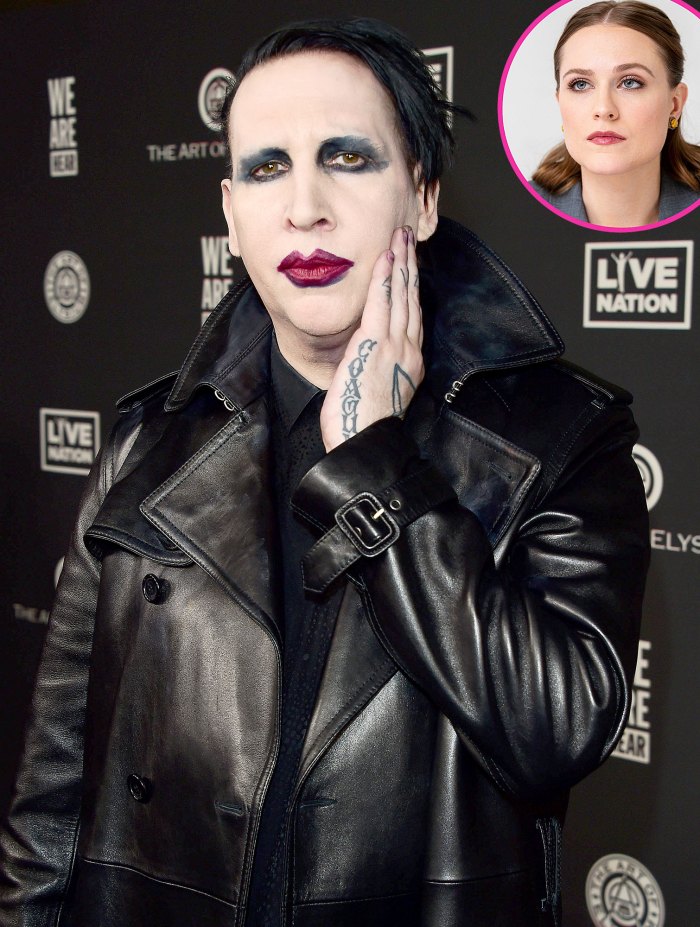 “I am done living in fear of retaliation, slander, or blackmail,” Wood wrote on Monday. “I am here to expose this dangerous man and call out the many industries that have enabled him, before he ruins any more lives. I stand with the many victims who will no longer be silent.”

Four women later came forward with their own allegations against the “Wrapped in Plastic” singer, which Wood reposted on her Instagram Story in solidarity. Manson has not publicly commented on any of the claims against him.

The True Blood alum has been an outspoken advocate about sexual and domestic abuse, previously opening up about being raped twice during a Rolling Stone interview in 2016. The following year, she explained why she chose to keep the identities of her abusers private.

“[It’s] not because I don’t plan on saying these peoples’ names eventually,” she said in a YouTube video in October 2017. “But because to start that process is an emotionally draining, financially draining, really everything draining thing to do and to go through and I want to do with when I’m ready.”

Two years later, she revealed that her experience in a past abusive relationship drove her to self-harm. “When my abuser would threaten or attack me, I cut my wrist as a way to disarm him. It only made the abuse stop temporarily. At that point, I was desperate to stop the relentless abuse and I was too terrified to leave,” she wrote in a March 2019 Instagram post, adding “#IAmNotOK.”

After splitting from Manson in August 2010, Wood married Jamie Bell in October 2012. They welcomed a son, now 7, before calling it quits in May 2014. She was later briefly engaged to bandmate Zach Villa for nine months in 2017. Manson, for his part, was previously married to Dita Von Teese from November 2005 to December 2007 and announced in October 2020 that he quietly wed photographer Lindsay Usich earlier that year.

Us Weekly reached out to Manson’s rep for comment but did not receive a response.