No ring yet! Kylie Minogue shut down rumors she and boyfriend Paul Solomons are engaged.

The “Can’t Get You Out of My Head” singer, 52, set the record straight via Twitter on Saturday, February 6, following some confusing comments from actress Billie Piper. 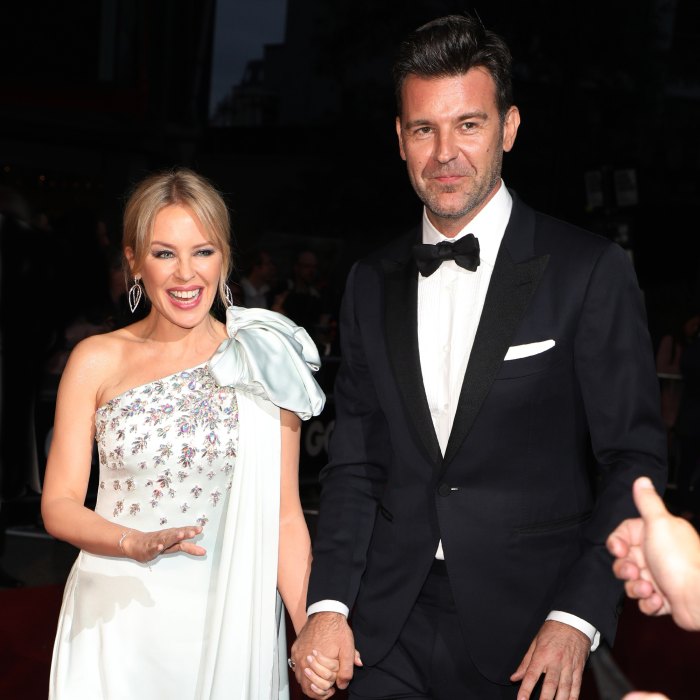 The confusion came after Piper, 38, shared an essay for Elle U.K. in which she recalled Solomons, 46, saving her life when she collapsed in 1996 at the age of 18 from “days of Diet Cokes and Marlboro Lights.”

She wrote: “My PR rang through to my hospital bed to fill in some blanks — I’d been carried out of the club by a man, apparently. A hero or a pest? I wondered. It’s always hard to tell. (Later, I’d find out his name is Paul, like my dad. He’s Welsh, works at GQ and will, in time, become a dear friend, a blinding success and Kylie Minogue’s fiancé. Hero, not pest. Kylie knows.)”

The Grammy-winning musician further left fans buzzing after she was spotted wearing a massive ring on her left ring finger in a playful Instagram video on Saturday. Minogue, who posed wearing a black polka-dot blouse and miniskirt, did not address the jewelry in her caption.

Paul set the record straight in his own way. He posted a photo of Fleetwood Mac’s album “Rumors” via his Instagram Story with the caption, “Today’s classic soundtrack.”

Minogue and the creative director for British GQ have been dating since 2018. She was previously linked to Joshua Sasse. The pair got engaged after two years of dating and called it off in February 2017. Speaking with Red Magazine at the time, the singer revealed, “I never thought I would get married. Just going through ‘being engaged’ seems like an experiment, because I’d never as a girl or in all my life had a vision of getting married.”

She continued, “It’s not something I needed or wanted. My parents never brought me up with the idea of ‘the big marriage.’ I never had it as a goal.”

Sasse, for his part, appeared to address the split in a since-deleted Instagram post. He shared a quote that read, “Whatever it is that’s happening to you, you have to know, and always remember; IT’S. NOT. PERSONAL.”