Poor Kourt! Kourtney Kardashian shared how she really felt about her sister Kim Kardashian calling her “the least exciting to look at” in a “Get Ready With Us” video posted to Kylie Jenner’s YouTube channel on Thursday, February 25.

“Oh, God, I was literally crying. … At the time I took it really personally and I was like, ‘Why would someone in my family, like, say something like that?” the Poosh founder, 41, said. Jenner, 23, paused doing her older sister’s makeup to comfort her with a hug.

“It turned into such a thing,” the Kylie Cosmetics owner said.

“Such a thing,” agreed Kourtney. “And then obviously I could laugh at it.” 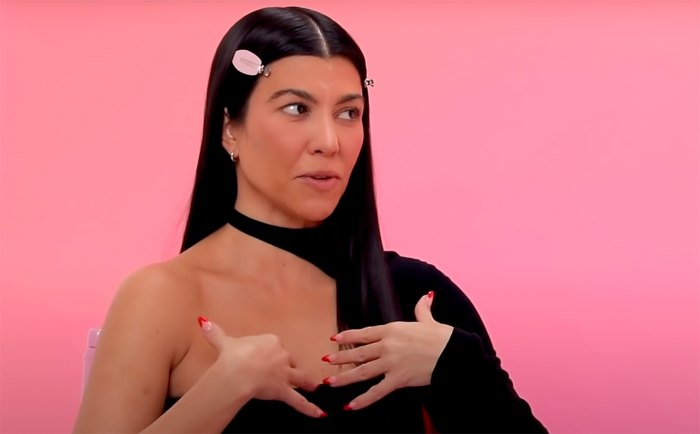 According to the mom of three, the Selfish author, 40, meant to say “you’re the least exciting” but tacked on “to look at” as an extra dig. To further confuse everyone, the line was adopted as “least interesting to look at” by fans. Kourtney called the Skims designer to confirm her story, and even Kim had a hard time remembering what she really said. Still, she regretted her mean comment.

“That was such a low blow,” the KKW Beauty owner said.

The dig was originally filmed when the family couldn’t agree on a time to shoot their annual Christmas card.

“I need Kourtney to not be so f—king annoying with a stick up her ass like she runs this s—t because she doesn’t,” Kim said in a 2018 episode of Keeping Up With the Kardashians. “She is the least exciting to look at, so she can be out.”

Having confirmed the story, the sisters were able to move on in their conversation before showing off the finished makeup look.

“I really have such a talent,” the Kylie Skin founder said.

Keeping Up With the Kardashians will officially wrap after 20 seasons this year. The final season is set to premiere on E! Thursday, March 18.