The Keeping Up With the Kardashians star, 41, was spotted sitting in the VIP bleachers with her boyfriend, Barker, during the UFC 260: Miocic vs. Ngannou 2 event at the UFC Apex facility in Enterprise, Nevada on Saturday, March 27.

The Transformers actress, 34, and the “Bloody Valentine” singer, 30, were also in the audience. Both couples smiled for the camera and waves to fans in a video shared by ESPN. 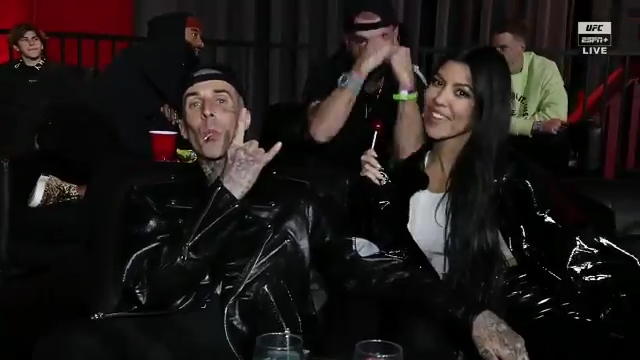 In the clip, Fox sipped her water while Kelly toasted the camera and took a swig of his drink. The Blink 182 drummer, 45, made a rock-on sign from the stands while his girlfriend took a lick of her lollipop.

Kardashian later shared a photo of two lollipops on her Instagram Story, tagging the location as Las Vegas. Her date night with Barker came two months after Us Weekly confirmed in January that the pair were “officially a couple.” 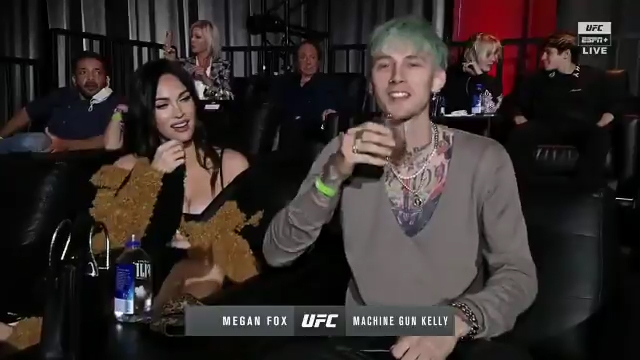 An insider told Us at the time that the pair “have been close friends for years and have been dating for a couple of months,” adding that the musician “is very smitten with Kourtney and has been for a while.”

The couple became Instagram official the following month, posting a photo of themselves holding hands in a car after celebrating Valentine’s Day together in February.

Earlier this month, the Poosh founder was spotted packing on the PDA with Barker after dining at West Hollywood’s Crossroads Kitchen.

“Kourtney and Travis are doing really well,” a source exclusively told Us after the flirty outing. “Kourtney is so smitten with Travis, and everyone around them loves them as a couple.”

The reality star, who shares three children, Mason, 11, Penelope, 8, and Reign, 6, with ex Scott Disick, declared her love for her new man on Monday, March 22, by writing him a note that read, “I love you.”

The California musician, who shares two children Landon, 17, and Alabama, 15, with ex-wife Shanna Moakler, shared the intimate message with his fans via his Instagram Story.

Fox, for her part, started dating the Dirt actor after splitting from Brian Austin Green in late 2019, which Green, 47, confirmed in May 2020.

The duo met on the set of their film Midnight in the Switchgrass in March 2020 and two months later sparked romance speculation when they were spotted together. Us exclusively confirmed in June 2020 that the pair had “gotten more serious” and were officially dating.

The Jennifer’s Body actress, who shares three sons, Noah, 8, Bodhi, 7, and Journey, 4, with the Beverly Hills, 90210 alum, sparked engagement speculation in January after she was spotted wearing a huge ring on her left hand. She reacted to the rumors by posting a photo of the ring, which read, “F—k you,” on her Instagram Story.

Earlier this month, Kelly’s ex-girlfriend Sommer Ray accused him of cheating on her with Fox. The YouTube star, 24, claimed that her relationship with the rapper hadn’t ended before he started seeing Fox.

“I don’t really feel bad saying that because he did kind of cheat on me with Megan Fox,” she said on the Tuesday, March 23, episode of Logan Paul’s “Impaulsive” podcast. She alleged that she was in Puerto Rico when Kelly and Fox were filming their upcoming move, saying, “I waited in the hotel the whole time while he’s filming with her and I’m not really thinking anything of it.”