“Scott is aware of them being together and is OK with it since she and Scott haven’t been dating for a while,” a source tells Us Weekly exclusively. “He isn’t jealous over their romance because he believes he still has the upper hand being the kids’ father.”

Kardashian, 41, and Disick, 37, still have “an incredibly special bond that no one can ever come between,” the insider adds, noting that the former couple’s “history together and love for each other can’t be touched by anyone else, and they both know that.” 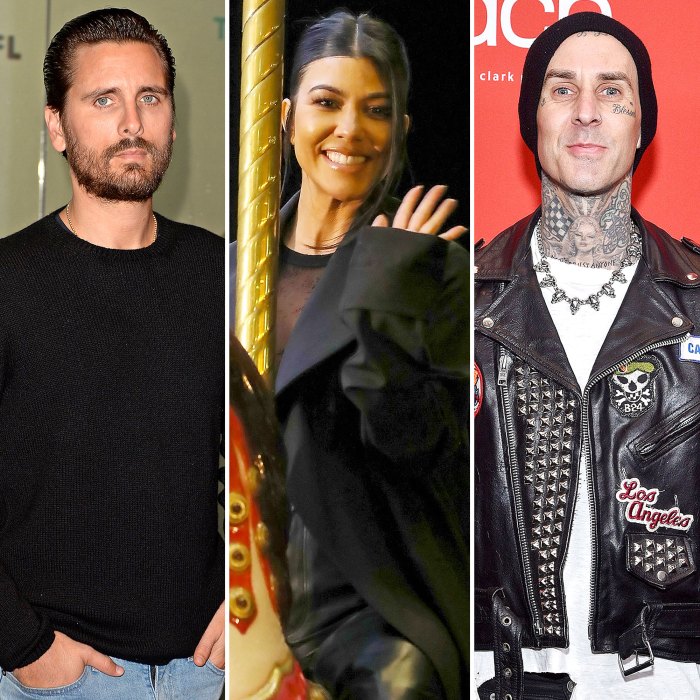 Us confirmed on January 24 that the Poosh founder has been dating the 45-year-old Blink-182 rocker “for a couple months.” News of their romance came after they shared similar photos from her mom Kris Jenner’s vacation home in Palm Springs, California.

An insider revealed to Us that Kardashian’s kids and Barker’s teenagers “are very close,” which is something that led to the new couple “spending a lot of time together.”

After Kardashian and Disick ended their on-and-off relationship in 2015, the pair worked together to build a strong coparenting bond.

Like Kardashian, the Talentless cofounder has also seen changes in his relationship status as of late. He ended his nearly three-year relationship with Sofia Richie in August 2020. While Us broke the news of the 22-year-old model’s new romance with Matthew Morton in October 2020, Disick was linked to models including Bellas Banos and Megan Blake Irwin.

Disick later stepped out with Amelia Gray Hamlin, daughter of Lisa Rinna and Harry Hamlin, on Halloween last year. A source told Us exclusively that the Kardashian-Jenner family are “super supportive” of the romance.

“They really like the two of them together and think Amelia is a great influence on Scott,” the insider shared on January 4. “Scott and Amelia are in a really good place. They have a lot of love and respect for each other and it shows.”