The Keeping Up With the Kardashians star, 41, shared a photo holding hands with Barker on Tuesday, February 16, via Instagram. The Blink-182 musician, 45, posted the same cozy snap on his Instagram Story and tagged Kardashian.

The picture, which shows the Poosh founder interlocking her fingers with Barker while in a car, is the first time the couple have posted on social media together since news of their romance broke earlier this year. Barker also left a black heart emoji on his girlfriend’s post as other friends showed their support for the relationship. 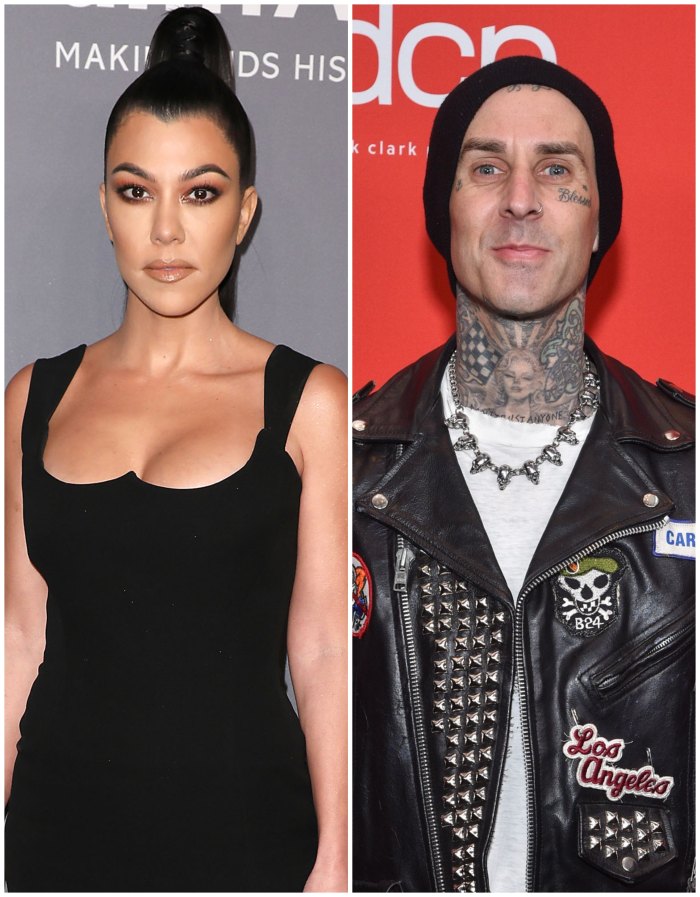 The Flip It Like Disick star, who has been linked to Hamlin since October 2020 after they attended Kendall Jenner’s birthday bash together, shared photos from his romantic trip to Miami over the weekend.

The model also posted videos from the getaway, one of which showed Disick driving a boat and a bouquet of roses he appeared to give her for Valentine’s Day.

As the couple went public with their romance, Kardashian seemed to shade her ex, with whom she shares Mason, 11, Penelope, 8, and Reign, 6, by “liking” a post about being “better off” without a man who doesn’t know a woman’s worth.

Kardashian “liked” and commented with a heart emoji on Miley Cyrus’ Instagram post on Saturday, about listening to her father Billy Ray Cyrus’ advice on heartbreak and men.

“You’re better off without him if he’s gonna choose her over you, he obviously has no taste,” Billy Ray’s Hannah Montana character, Robby Ray Stewart, said in a series of photos Miley, 28, shared on her account.

After hinting at her ex’s new romance, Kardashian celebrated Valentine’s Day with Barker on Sunday, February 14. Both stars shared photos of the same fireplace on their respective Instagram Stories on the holiday, three weeks after Us Weekly confirmed that their years-long friendship had become romantic.

“They have been close friends for years and have been dating for a couple months,” a source told Us on January 24. “Travis is very smitten with Kourtney and has been for a while.” A second insider told Us that the pair’s children helped bring them closer over the years.

The Grammy nominee shares Landon, 17, and Alabama, 15, with his ex-wife, Shanna Moakler, as Kardashian coparents with Disick.

“Kourtney loves the way Travis is as a dad and how involved he is in his children’s lives, just like herself,” a third source told Us. “He makes her laugh hysterically, and she just adores that about him.”

Disick, who dated the California native from 2006 to 2015, “isn’t jealous over their romance,” another source told Us last month, noting the exes have “an incredibly special bond that no one can ever come between.”