Kim Kardashian appeared to put her marriage troubles with Kanye West behind her as she enjoyed a vacation in Turks and Caicos with her daughters as well as her sisters Kourtney and Khloé Kardashian and Kylie Jenner.

“Girls Trip!” the Skims founder, 40, captioned three photos on Saturday, January 30, showing her on a boardwalk leading to the beach with North, 7, and Chicago, 3. “Hot diggidy doggggggg,” Khloé commented on the pic, while Jenner’s pal Stassie Karanikolaou, who also appears to be on the trip, wrote, “Cuties.” 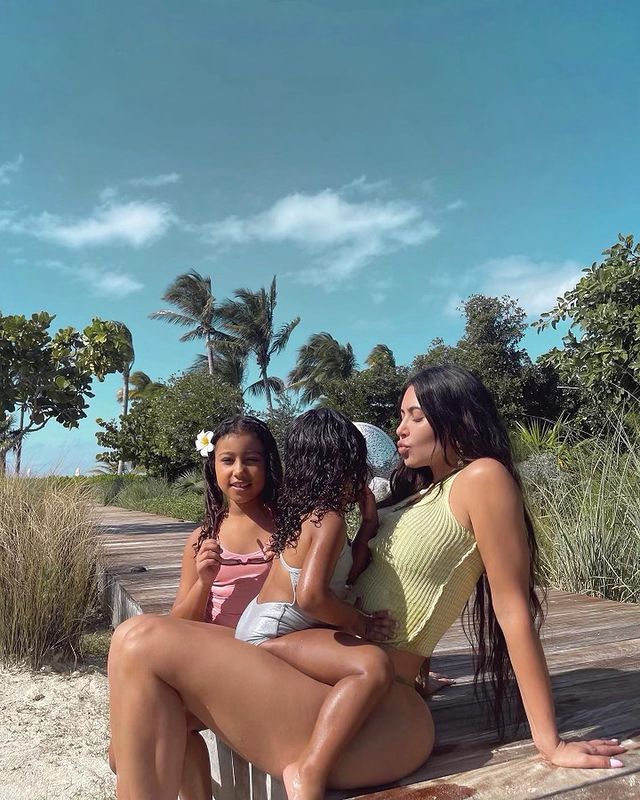 The group are staying at the Tranquility villa in Providenciales, where the family previously celebrated the Kylie Skin mogul’s 23rd birthday in August. The secluded mansion features 11 bedrooms, sits on 11 acres by a private beach and costs $6,000 a night.

Kim’s Caribbean getaway comes after rumors swirled earlier this month that Kim and West, 43, were headed for a split after six years of marriage.

As Us Weekly previously reported, Kim “began talking” with celebrity divorce attorney Laura Wasser in July to workout out a strategy amid her long-running issues with the rapper. Her move came after West kicked off his campaign for the U.S. presidency with a rally in South Carolina, where he emotionally revealed that he and Kim had come close to aborting their first child, North. He subsequently went on a Twitter rant, accusing his wife of trying to lock him up and claiming that he’d been trying to divorce her for two years.

A source told Us earlier this month that the Keeping Up With the Kardashians star has also consulted with “her financial advisors to figure out an exit plan that would be best for her whole family.”

“Kim has had all of her and Kanye’s financials and properties ready to be split, it’s a very fair deal for everyone,” the insider added. “Kim has all of her assets and financials ready for when she decides to file officially. Friends thought she was going to file in September, but she’s holding out. That does not mean that everything behind the scenes is already done.”

Another source told Us earlier this month that the pair “have both been living separate lives for many months now.”

“Kanye isn’t as focused and doesn’t live in the real world,” the insider added. “Their world views no longer line up.”