The 36-year-old Keeping Up With the Kardashians star posted a close-up snap of her colorfully manicured hands on Thursday, April 1, with a rainbow array of heart emojis written in the caption. On her left ring finger, a massive diamond ring sparkled in the sunlight.

“Girl we ain’t looking at your nails we looking at that 💎🤩😫❤️,” Selling Sunset‘s Christine Quinn teased in the comments.

Kardashian’s jewelry also caught the 30-year-old athlete’s attention. “👀👀😍😍💎💎,” he replied, quickly sparking speculation in the comments section that he and the Revenge Body host are engaged. 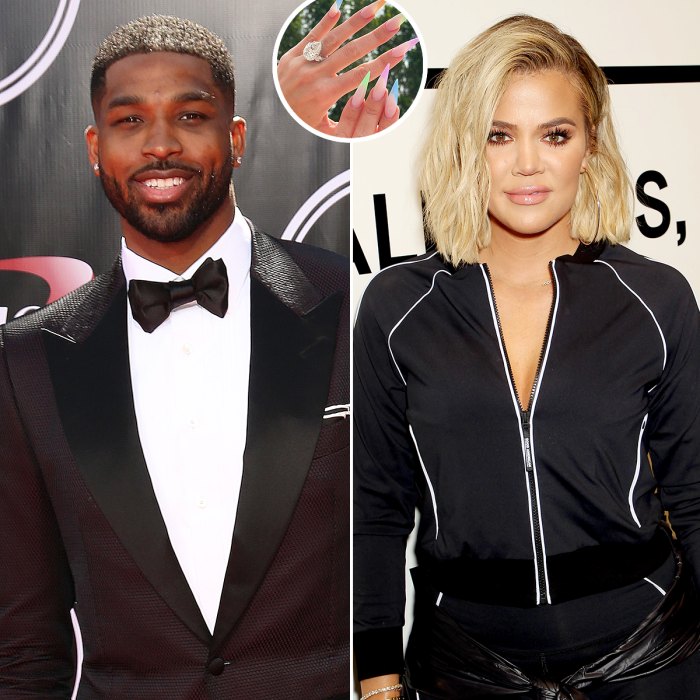 This isn’t the first time the reality star has sported the bling — or the first time the on-off couple has fueled engagement rumors. In March, Kris Jenner played coy about her daughter’s relationship status during an interview on The Ellen DeGeneres Show.

“That’s a good ring,” the 65-year-old momager mused. “I think she just loves jewelry. She loves a good ring. You should ask Khloé [about] that.”

As rumors continue to swirl around the duo, a source previously told Us Weekly that Kardashian “often wears a ring on that finger.”

Us confirmed in August 2020 that the Good American cofounder and Thompson, who share 2-year-old daughter True, were back together after quarantining together amid the coronavirus pandemic. The duo started dating in September 2016. News broke in April 2018 that the NBA player cheated on a then-pregnant Kardashian with multiple women. After attempting to work through their issues, the pair called it quits 10 months later when Thompson was caught kissing Kylie Jenner‘s former BFF, Jordyn Woods.

Before rekindling their romance, the twosome worked hard to amicably coparent their daughter. In November 2020, the Canadian basketball star was traded to the Boston Celtics after previously playing for the Cleveland Cavaliers for nine seasons. A source later told Us that the couple “will be living together in Boston and L.A.” and that “Khloé is very dedicated to making their relationship work.”

Getting to a good place wasn’t easy for the duo, whose ups and downs play out on the current season of KUWTK. During a March episode of the long-running reality series, Kardashian admitted that she and Thompson were still “figuring things out.”

She told cameras in a confessional interview, “I’m still trying to navigate my way through my feelings and that’s how I want to keep it.”

Scott Disick, however, urged the Strong Looks Better Naked author to stop being so concerned about outside opinions when it comes to her relationship. “There’s gonna come a point where [Tristan] doesn’t want to feel like you’re embarrassed of him still,” he said in the episode. “It’s still gotta be kind of hard. … The truth is, no matter what you do, people are always going to talk s–t.”