“The sweetest! Thank you Pete,” the 37-year-old Good American designer wrote alongside a pic of pink flowers on Monday, February 14, via Instagram Stories. She added three pink heart emojis. 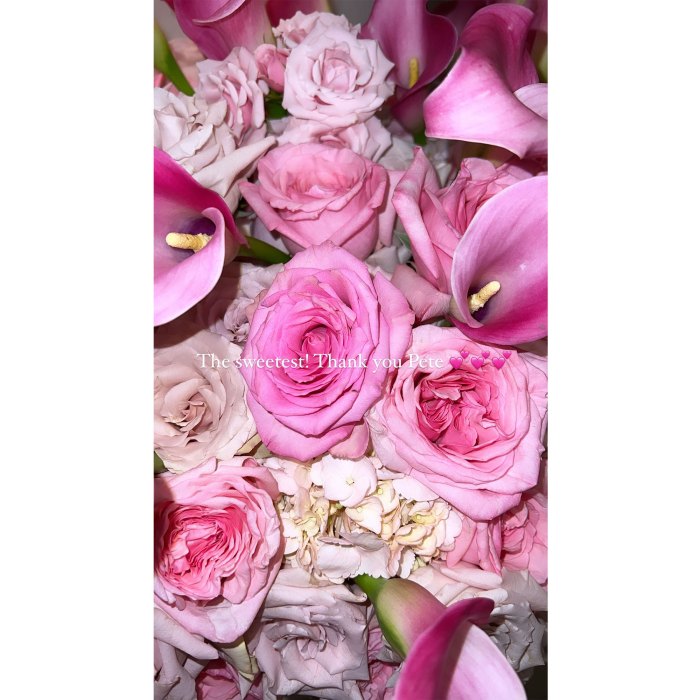 In addition to sharing snaps of arrangements from niece Penelope Disick (the daughter of Kourtney Kardashian and Scott Disick), Kylie Jenner and Travis Scott (and their “little angels” a.k.a. daughter Stormi, 4, and son Wolf, 2 weeks, and mom Kris Jenner, Khloé shared a cryptic quote about love from Winnie the Pooh.

“Pooh, how do you still love?” Piglet asks to which Pooh responds, “You don’t still love, Piglet … You feel it.”

Khloé has seemingly been single since her summer 2021 split from Tristan Thompson. The on-again, off-again pair, who share daughter True, 3, quietly called it quits before the NBA star made headlines for fathering a child with Maralee Nichols. The fit model slammed Thompson, who didn’t acknowledge he was the father of Nichols’ baby until a paternity test was completed amid a paternity lawsuit, on Monday for not having a role in his son’s life.

“Despite news reports stating otherwise, Tristan Thompson has done nothing to support their son,” Nichols’ rep told Us Weekly in a statement. “He has not made any attempt to meet their son nor has he provided any financial assistance.”

Khloé’s sister Kim, for her part, has been luckier in love with Davidson in recent months, but that doesn’t mean there hasn’t been drama. The 41-year-old Selfish author’s estranged husband, Kanye West, has made several public pleas to win Kim back — and slammed the Saturday Night Live star in the process. On Monday, the rapper shared the Skims designer’s alleged text messages asking him to stop putting Davidson in danger.

A source, however, tells Us that Davidson is “not afraid” of West, he “just doesn’t want to get involved in the divorce drama.”

The insider explains, “Pete’s not even on Instagram so finds it comical that Kanye is posting all this stuff about him.”

“Kim and Pete are very in sync,” a second source told Us in January, noting that Davidson has “bonded with her entire family” as the duo gets “more serious.”