Mummy, is that you? Princess Kate and Prince William’s three children are all too familiar with their parents’ engagement photos — and they had an unexpected reaction to the throwback snaps when they saw them for the first time.

“Oh my goodness, is that from our engagement?” the Princess of Wales, 40, marveled over a gifted photo during a Tuesday, September 27, walkabout in Wales, per TikTok footage. “[William and I] always laugh about this. Although we’ve been married for 11 years, we’ve been together for double that, so it’s extraordinary.” 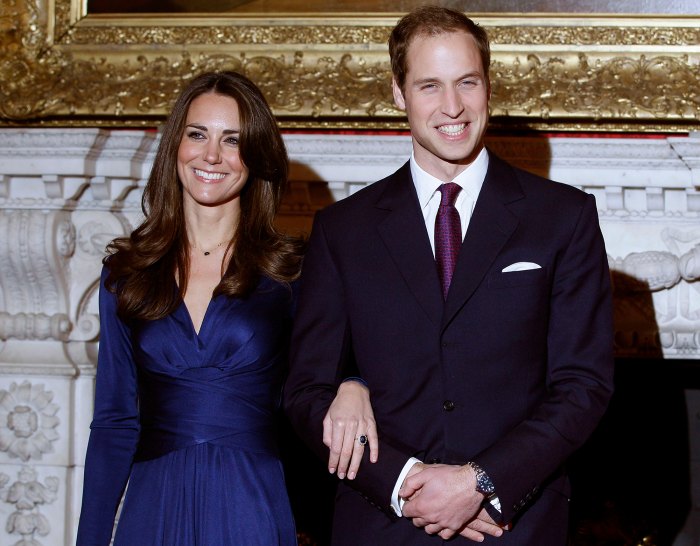 Kate and the Prince of Wales, 40, visited the towns of Anglesey and Swansea in Wales on Tuesday, marking their first visit to the country since receiving their new royal titles from King Charles III after his accession to the throne. The duke and duchess — who later visited RNLI Holyhead Lifeboat Station in Anglesey — also met with crowds of well-wishers.

“The children look back at the photos and say, ‘Mummy, you look so young!’” Kate quipped on Tuesday, referring to sons Prince George, 9, and Prince Louis, 4, and daughter Princess Charlotte, 7.

While William and Kate have been married for more than a decade, they first met when they were both undergraduate students at the University of St. Andrews in Scotland. After several years of dating, the former RAF pilot proposed with his late mother Princess Diana’s sapphire engagement ring.

“It was about three weeks ago on holiday in Kenya. We had a little private time away together with some friends and I just decided that it was the right time really,” William recalled the big moment during their official engagement interview with the BBC in November 2010. “We had been talking about marriage for a while so it wasn’t a massively big surprise. I took her up somewhere nice in Kenya and I proposed.”

He added: “I’d been planning it for a while but as every guy out there will know it takes a certain amount of motivation to get yourself going. So I was planning it and then it just felt really right out in Africa. It was beautiful at the time. I just … I had done a little bit of planning to show my romantic side.”

The twosome eventually tied the knot in April 2011 with a grand Westminster Abbey ceremony, nearly two years before welcoming their first child, George. Charlotte and Louis later completed their brood.

As William and Kate continued balancing their royal duties and parenthood, the 73-year-old king bestowed his former titles of the Prince of Wales and Duke of Cornwall onto his eldest son after becoming king following Queen Elizabeth II’s death on September 8. As a result, Kate received the Princess of Wales and Duchess of Cornwall titles previously held by Diana and Queen Consort Camilla.

“It has a huge emotional weight,” royal expert Gareth Russell exclusively told Us Weekly earlier this month about William and Kate’s new monikers. “Princess Diana had such a great impact across the world with both her charisma and her fame and also her humanitarian and charitable activities.”

The historian added: “I think it is quite moving for a lot of people that the last person to hold [the Princess of Wales title] was William’s mother and now it’s his wife. I think it puts a good kind of pressure [on the Cambridges] because it brings a lot of the emotional collateral charisma that Princess Diana had and invests that title with a certain emotional appeal to people.”