Distanced duchesses. Duchess Kate and Meghan Markle have not spoken “directly in over a year,” a source exclusively reveals in the new issue of Us Weekly.

“They were never that close, but the reason they’re not speaking is because of the rift between Prince Harry and Prince William,” the insider says. “Harry and William have communicated sparingly over the last year, but none of their communications have been friendly in quite some time. There is real animosity that the brothers have toward one another, and that has spilled over to Meghan and Kate’s relationship, making it very hard for them to be friends or even friendly.”

Meghan, 39, spoke candidly about her relationship with Kate, also 39, for the first time during her and Harry’s CBS tell-all interview on Sunday, March 7. 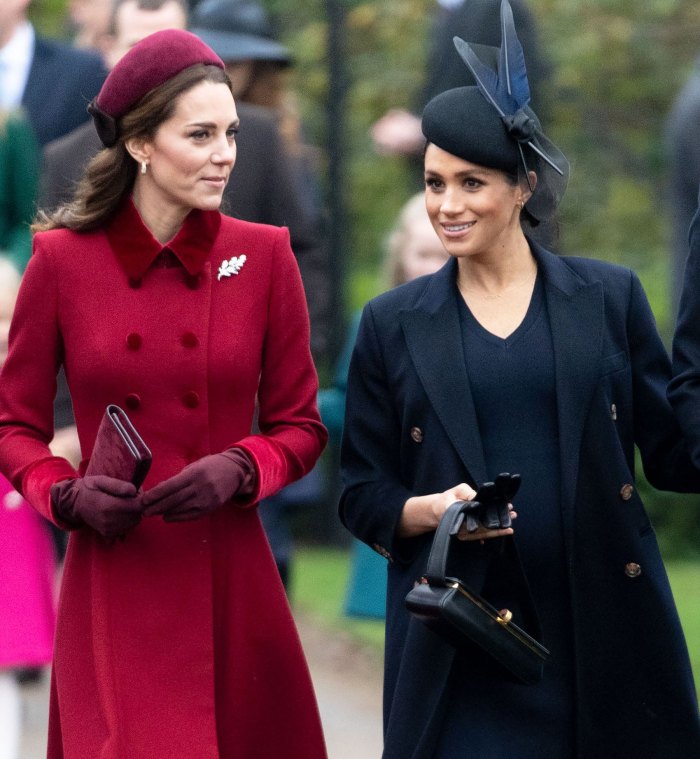 “If you love me, you don’t have to hate her. And if you love her, you don’t have to hate me,” the retired actress said, noting that the “narrative” that she made the Duchess of Cambridge cry ahead of the Duke and Duchess of Sussex’s May 2018 wedding was incorrect. “The reverse happened. … A few days before the wedding she was upset about flower girl dresses and it made me cry. It really hurt my feelings.”

While the two women made up after the wedding snafu, the source tells Us that they struggled to form a real bond due to their differences.

“In the beginning of their relationship, Kate and Meghan did get along,” the source says, but “they didn’t see eye-to-eye when it came to day-to-day life in the palace.”

The source adds that Kate “wishes she knew more” about Meghan’s struggles to adjust to royal life. During the aforementioned interview, the Suits alum revealed she was suicidal while she was pregnant with son Archie, now 22 months. Meghan cited the way she was portrayed in the U.K. press — and the royal family’s lack of support — as a contributing factor to her mental health struggles.

“Kate was called ‘Waity Katie’ waiting to marry William. While I imagine that was really hard, and I do, I can’t picture what that felt like. This is not the same,” Meghan said. “And if a member of this family will comfortably say, ‘We’ve all had to deal with things that are rude.’ Rude and racist are not the same. And equally, you’ve also had a press team that goes on the record to defend you, especially when they know some things are not true. And that didn’t happen for us.”

For more on the royals, watch the video above and pick up the new issue of Us Weekly, on newsstands now.