“Officially 34,” the former reality star tweeted on Thursday, June 23. “Fourteen years ago I said, ‘YES!’ Road-tripping to visit my bestie. ‘Even If’ by Mercy Me on repeat. ‘Jesus, I will cling to You come what may.’”

While she didn’t specify who was the “bestie” in question, several social media users wondered whether Anna was referring to Josh, also 34, who is currently being held in an Arkansas jail awaiting transfer to a federal prison. Last month, a judge sentenced the political activist to 151 months behind bars following his April 2021 arrest for receiving and possessing child sexual abuse material. He was found guilty of the charges in December 2021 and recently filed to appeal his conviction.

The couple tied the knot in 2008, two years into their courtship. Anna and Josh share seven children: Mackynzie, 12, Michael, 10, Marcus, 8, Meredith, 6, Mason, 4, and Maryella, 2, and Madyson, 7 months. A source exclusively told Us Weekly the little ones are Anna’s “No. 1 priority” with her husband away from home for the foreseeable future.

“That will never change. She’s with them all the time,” the insider added.

Anna has not officially addressed Josh’s conviction, but she was spotted supporting him multiple times throughout his trial and sentencing. Despite their ups and downs, the source noted that the couple remains “very devout in their faith” — and aren’t planning to separate amid Josh’s prison stay.

“She won’t move on with another man,” the insider told Us. “They don’t believe in divorce. … She’s going to stand by her husband and she’s going to continue raising their kids to the best of her ability.” 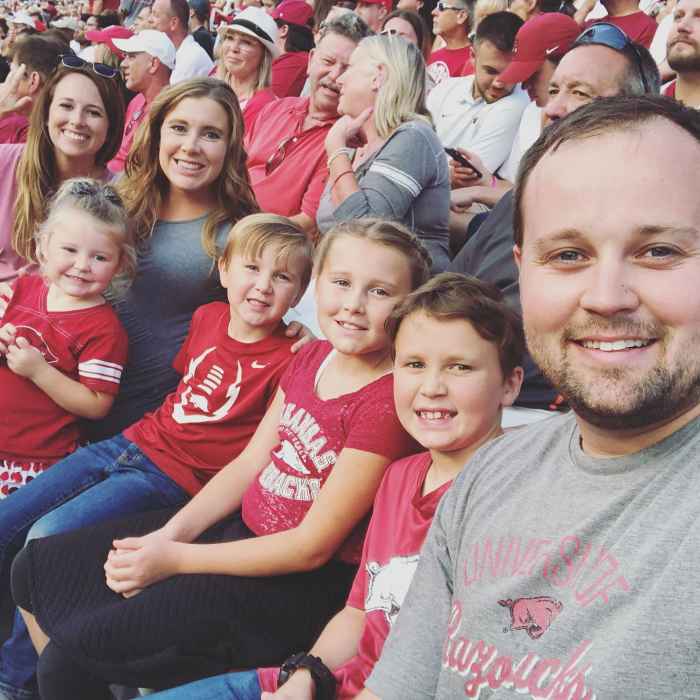 Anna and Josh Duggar with their kids. Courtesy Anna Duggar/Instagram

After Josh received his guilty verdict, his parents, Jim Bob and Michelle Duggar, asked fans to keep their eldest child in their prayers. “This entire ordeal has been very grievous. … As parents, we will never stop praying for Joshua, and loving him, as we do all of our children,” the 19 Kids and Counting alums told Us in a statement.

Several of Josh’s siblings attended the court proceedings and have spoken out amid the scandal. Following his sentencing, Jill Duggar and husband Derick Dillard felt “thankful” that the trial had come to an end.

“The last several weeks and months have been difficult emotionally. Yesterday was another one of those hard days,” the couple wrote via their family blog in May. “We are neither rejoicing nor disappointed by the sentence, but we are thankful it’s finally over. The Bible clearly states that God effects justice and vengeance through the governing authorities. Though some believe Josh should have received a greater sentence and still fewer believe he should have received a lighter sentence, God has carried out his vengeance today for his unspeakable criminal activity.”

The twosome stated that Josh’s prison stay might finally help him “be held accountable” for his behavior. “Hopefully, Josh can actually begin to get treatment and begin to work toward a lifestyle where he is less likely to reoffend,” Jill and Derick wrote. “We continue to love Josh and his family and will be there for them however we can.”