Family time! Joe Giudice has reunited with all four of his daughters, who he shares with ex-wife Teresa Giudice, in the Bahamas.

The former Real Housewives of New Jersey star, 48, who was deported to his native Italy in October 2019 after serving a 41-month prison sentence for fraud, relocated from Europe to the Caribbean at the end of last year. 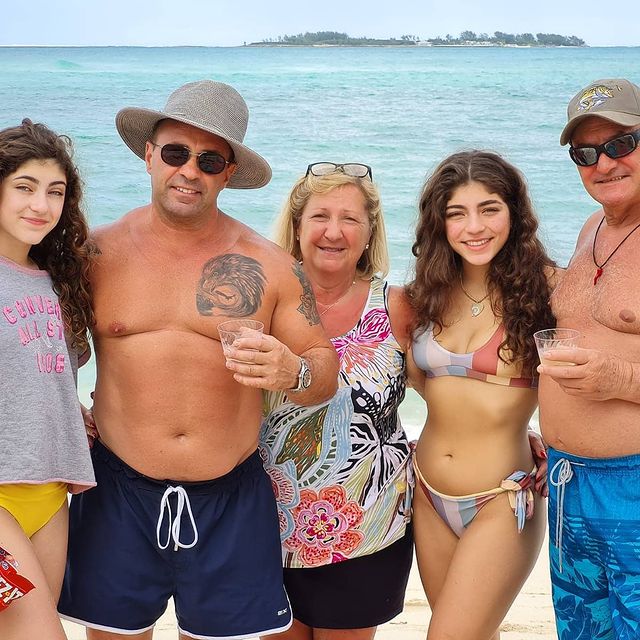 Joe Giudice with his daughters Audriana and Milania and his mother, Filomena. Courtesy Joe Giudice/Instagram

“He’s living in the Bahamas right now and I know he’s going to be fighting. He’s doing a celebrity fight,” Teresa told Extra last month of her ex, who is set to compete in a Celebrity Boxing match and has been posting videos on his Instagram account of how he’s getting in shape.

“A bunch of us are going to go,” Teresa said of the upcoming bout, which TMZ reported last year would pit Juicy Joe against Jennifer Lopez’s ex-husband Ojani Noa. “A lot of girls I know — Dolores [Catania] wants to go, Jennifer [Aydin] want to go … If I’m not working, I’m definitely going to be there.”

Joe last saw his daughters Gia, 20, and Milania, 15, in Italy in November, when they also got to meet his new girlfriend, Daniela Fittipaldi.

But the businessman hadn’t seen all four of his kids together since December 2019, just two months after he moved to Italy. Joe and Teresa, 48, announced their separation that same month and their divorce was finalized in September 2020. She has since moved on with boyfriend Luis “Louie” Ruelas, with her sister-in-law, Melissa Gorga, confirming in February that the couple have moved in together.

Joe shared a photo from his reunion with his girls on Instagram on Sunday, March 21, posting a photo of Milania and his youngest daughter, Audriana, 11, along with his mother Filomena. “Nothing like family,” he wrote.

He also shared a video that showed him doing the splits on the beach. “Still got it,” Joe captioned the clip. “Now that’s how you do it,” a woman could be heard saying, while another person said, “Never underestimate an old man.”

Gia shared a video on her Instagram Stories on Sunday that showed all four sisters, including Gabriella, 16, soaking up the sun on the beach in Nassau.

In an interview last year with Wendy Williams, Joe said that he talks to his daughters every day. Meanwhile, Aydin told Us Weekly last month on the “Getting Real With the Housewives” podcast that Teresa and Joe “have an amazing relationship” after their divorce.

“There’s no animosity there,” she added. “They look like they have a mutual respect for each other and I feel like everything’s good.”