The mystery continues. Jodie Foster is a big fan of the Green Bay Packers, but she has no idea why Aaron Rodgers thanked her while announcing his engagement to Shailene Woodley.

The two-time Oscar winner, 58, appeared on Jimmy Kimmel Live! on Thursday, February 18, to promote her upcoming movie The Mauritanian, in which she stars alongside the Big Little Lies alum, 29. During the interview, Jimmy Kimmel played a clip of Rodgers’ February 6 speech at the NFL Honors, where the quarterback, 37, name-dropped Foster, some of his teammates and his “fiancée,” whom Us Weekly later confirmed was Woodley.

“You see, he said ‘my team,’ even though he said ‘off the field.’ That makes me a Green Bay Packer!” the Silence of the Lambs star quipped. “People keep saying to me, ‘No, Jodie, that does not mean you’re part of the team.’ But it does mean I’m part of the team.”

When the late-night host, 53, asked Foster whether she knows Rodgers, she responded, “No! He just knows I’m his biggest fan.” 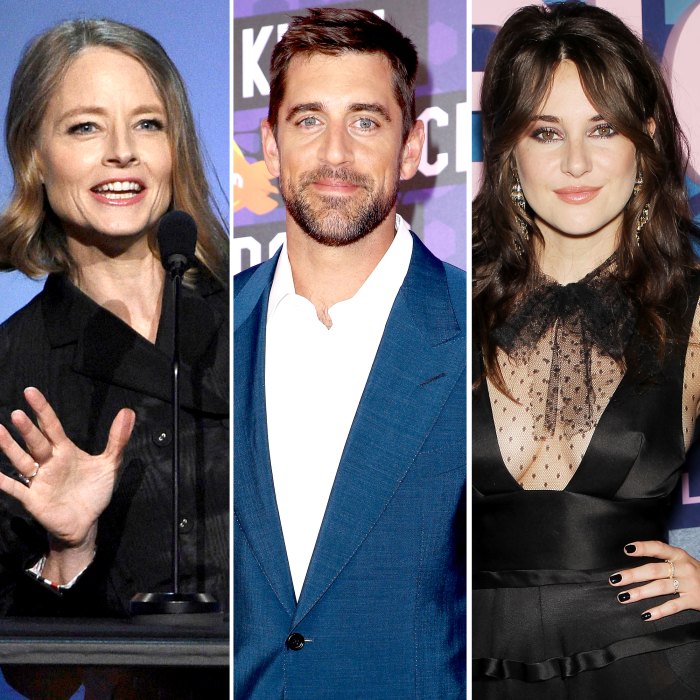 That said, the Taxi Driver star made a promise to give the NFL star a shout-out at the upcoming Golden Globe Awards should she win Best Supporting Actress for The Mauritanian.

“Absolutely,” she told Kimmel. “I may have to thank the whole team, maybe. Davante Adams has to be in there somewhere.”

After Rodgers shocked fans by announcing his engagement only days after Us confirmed he was dating Woodley, some social media users theorized that Foster had set up the couple due to their mutual connection. While the Accused actress denied doing so, she only had kind things to say about her costar.

“[Shailene] is fantastic,” she raved on Thursday. “We spent a lot of time on The Mauritanian together in a little tent with a little air conditioning spitting at us, talking about our lives and, you know, recipes and people we hate and things like that.”

The Super Bowl champion was previously in relationships with The Newsroom alum Olivia Munn from May 2014 to April 2017 and former race car driver Danica Patrick from December 2017 to July 2020. Woodley, for her part, confirmed her split from rugby player Ben Volavola in April 2020 after nearly three years of dating.