“On 2.27 I said yes on the top of the Empire State Building,” the New Jersey native, 35, wrote via Instagram next to a photo of her and Carpinello, 26.

The couple began dating in March 2019, and he was soon introduced to her Jersey Shore castmates. The duo split following an October 2019 episode, which showed the wrestler getting flirty with Angelina Pivarnick. Later that month, however, they were spotted at a theme park with her children. In December 2019, they confirmed they were back together via social media.

“You mean absolutely everything to me,” he wrote via Instagram at the time, posting a photo of Farley. “You are my world. You are tremendously special in so many ways. You are an absolutely gorgeous woman inside and out. We are incredible together, and I want to be by your side for the rest of time.”

In November 2020, the Snooki & JWoww alum revealed exclusively to Us Weekly she was a bit hesitant to have her boyfriend back on the show — but went along with it, anyway.

“Being back on TV as we do this show, you never know how it turns out,” she shared with Us ahead of Jersey Shore Family Vacation season 4. “So, bringing him back in and just like coming full circle and being like, ‘Alright, let’s hit the reset button, and redo this,’ obviously, I was a little hesitant. I’m very protective [just] as I am with my roommates. I just want everyone to be happy, but I also don’t want anything taken out of context. So, you know, that’s the mama bear in me!” 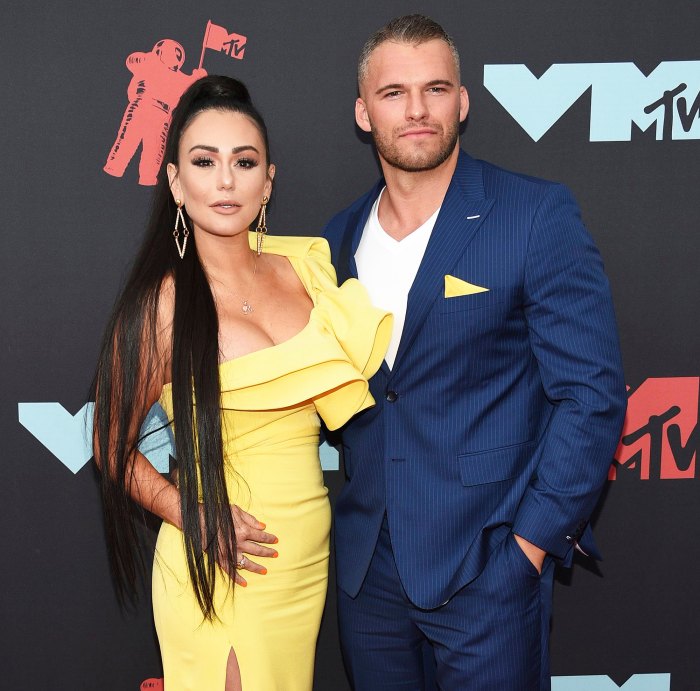 The Rules According to JWOWW author was previously married to Roger Mathews. The exes share daughter Meilani, 6, and son Greyson, 4. Carpinello attended Farley’s first wedding in 2015, as he had been longtime friends with the now-exes.

The Marriage Boot Camp alum has been very candid about their romance since it began, even detailing their sex life during Jersey Shore Family Vacation.

“I never in a million years thought I would be dating someone younger than me,” she said during a September 2019 episode. “We’re completely different. Not my style at all. He turns into this f–king monster in bed. I was like, ‘Are you an escort? What’s going on?’ It wasn’t normal. I had to look up positions and stuff.”