Home sweet home! Miley Cyrus’ Los Angeles house was designed by her mom, Tish Cyrus, which helped get the right rocker feel for the space.

“My wheelhouse is very much boho chic. In my own house, I like everything neutral,” Tish, 53, told Architectural Digest in an interview, published on Thursday, April 29. “But with Miley, it’s got to feel rock and roll. There’s a lot of color. Technicolor.”

The “Midnight Sky” singer’s pad includes a mouth-shaped chair that wiggles its tongue and a psychedelic ceiling, both of which fit in with the “more is more is more” theme that Tish said the pair were going for. 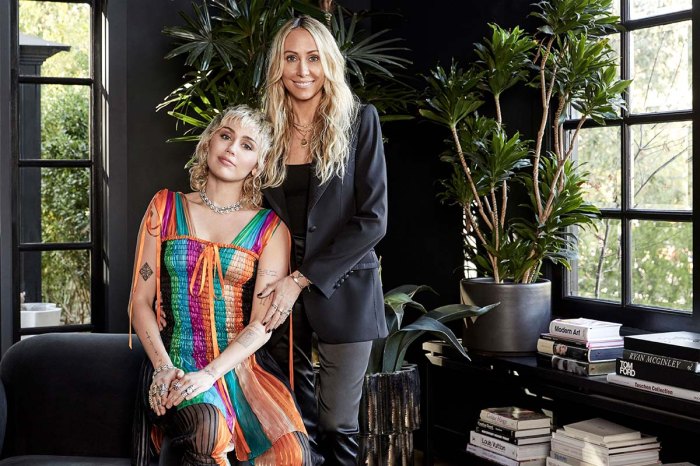 “My mom believes that nothing is permanent, that there’s nothing that can’t be undone,” the Hannah Montana alum, 28, said. “People make bold choices in their lives, and sometimes those gambles work and bring you good fortune, and sometimes they don’t. But it’s a risk she’s willing — and I’m willing — to take in our lifestyle, and that is reflected in the design.”

Tish, who has been her daughter’s manager for 16 years, enlisted the help of her design partner Mat Sanders to make the home feel like Miley.

“My biggest thing is that when you walk into someone’s house, I want you to know who lives there, what their personality is, what they love, and what they’re like,” she explained. “I know Miley so well, and we’re so close, so I was really able to do that.”

While it seems like a lot of ground to cover, the trio were able to add pops of the Last Song actress into every room, including a “peacock” or “clam” chair that is made up of blue, purple and pink fabric in the living area. The room also has a bunch of Dan Lam’s drippy sculptures, a painting by Takashia Murakami and a Gulla Jonsdottir Puzzle table.

The powder room screams Miley with its tiger face Gucci wallpaper, while the sitting room catches visitor’s eyes with his bold, black chandelier by Blackman Cruz. 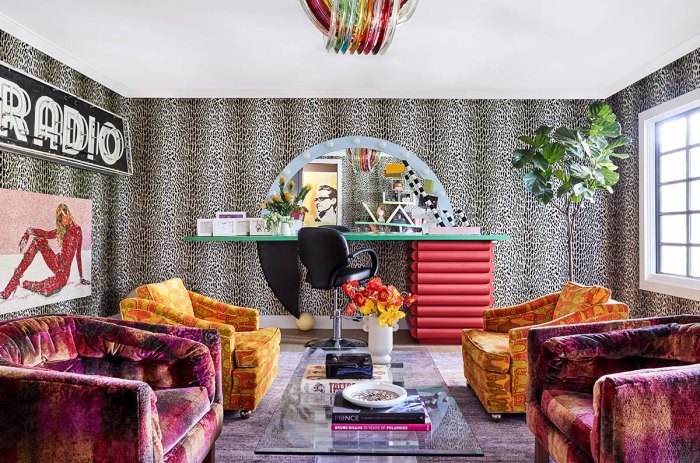 The kitchen, meanwhile, is bright and welcoming with its farmhouse lighting. A white backsplash matches the white countertops and cabinets and flows easily with the white table and zebra chairs of the dining room. There are black accents throughout the space, including a black hood range over the stove.

The “Party in the U.S.A.” singer also has an in-home studio and adjacent bathroom, as well as a glam lounge, which is covered floor-to-ceiling with leopard wallpaper and has a painting of Miley hanging on the wall.

One of the musician’s favorite spaces, however, is the outdoor lagoon-style swimming pool and expansive garden that she says make her feel like she’s “kind of back in Nashville again,” which is where she was raised.

Miley previously shared a home in Malibu, California, with ex-husband Liam Hemsworth. The home burned down in November 2018, which she later revealed was part of the reason for her marrying the Australian actor, 31.

“Me being an intense person and not wanting to sit with it and not wanting to go, you know, ‘What could be purposeful about this?’ I just clung to what I had left of that house, which was me and him,” she told Howard Stern in December 2020.

One month after losing their home, the couple wed in December 2018 after dating on and off for 10 years. They announced their split eight months later. Miley then dated Cody Simpson for less than a year following a brief fling with Kaitlynn Carter. Hemsworth, for his part, is dating model Gabriella Brooks.