FLEUR EAST is all about the hair: big, beautiful curls that move as she chats and laughs on the baking-hot warehouse rooftop where our photo shoot is taking place.

The X Factor finalist and I’m A Celebrity! star pats her head and grins. “I’m the first female presenter with an afro on British prime-time television – that’s pretty cool.”

TV star Fleur East reveals the desperate measures she took to fit in as she hasn’t always felt so free to embrace her stunning hairCredit: Mark Hayman 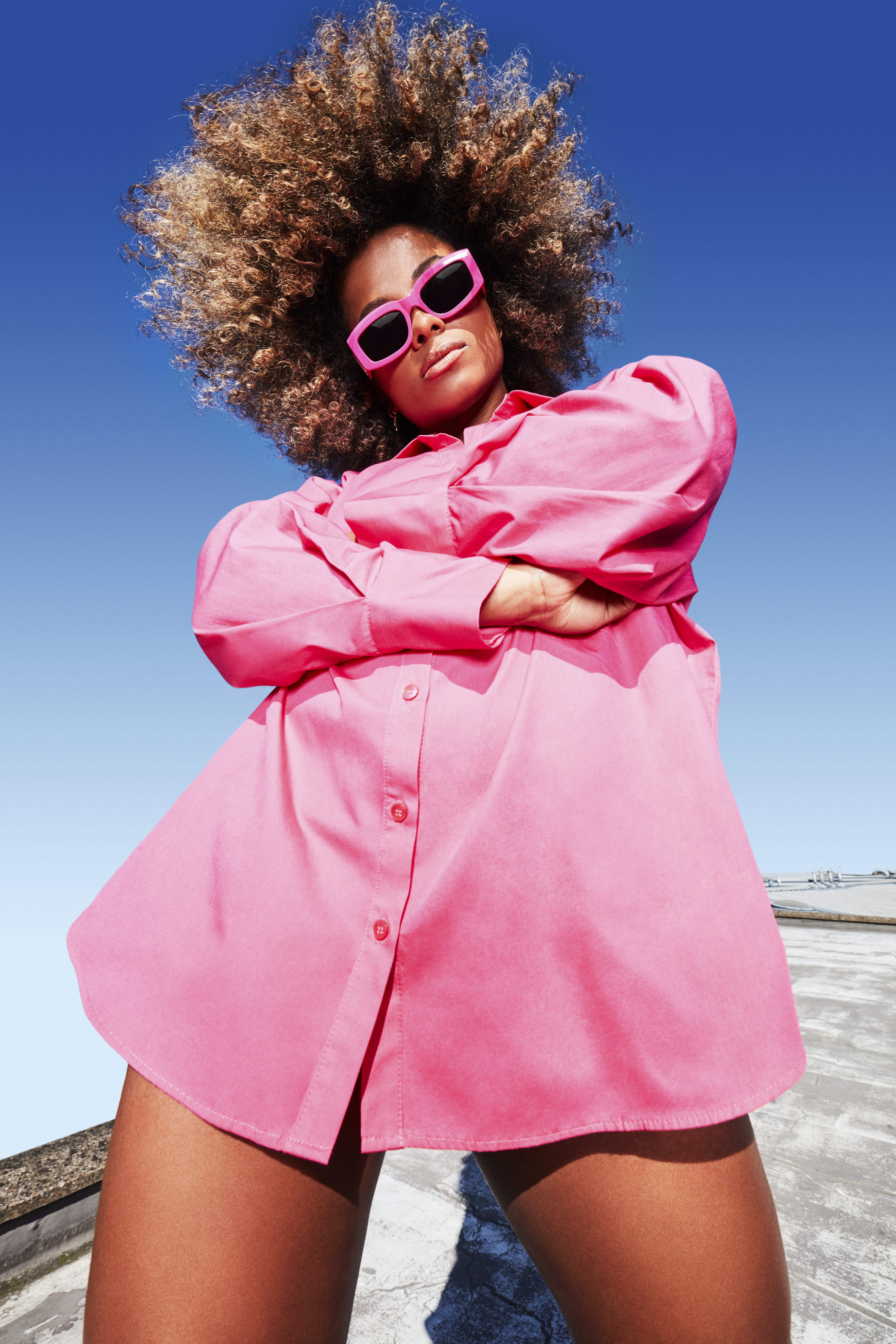 However, the X Factor finalist is now all about the hair: big, beautiful curls and even is the first female presenter with an afro on British prime-time televisionCredit: Mark Hayman

Fleur, 33, who is fronting ITV’s nail-biting Saturday night game show The Void alongside Ashley Banjo, has every reason to be proud of her statement hair.

As the eldest daughter of a Ghanaian mother, Irene, 58, and English father, Malcolm, who died last year aged 74, she’s spent much of her life battling racism and often felt forced to straighten her natural curls to conform to the “perfect image of a pop star.”

She says: “So much of my identity as a mixed-race British woman is wrapped up in my hair. Hair is a massive thing to my community. When I walked out on set on day one of The Void, the first thing Ashley said to me was: ‘Wow! You’re wearing your hair natural! That’s fantastic!’

“I think he thought that because it was a big Saturday night show, I’d have it all groomed and straightened, because that’s what so many women do. But I was never going to do that. No way.”

But Fleur hasn’t always felt so free to embrace her curls, and she admits that as a girl growing up, she did everything she could to get rid of them.

“For much of my life, particularly as a teenager, I hated my hair,” she says. “I straightened it all the time. Sometimes I even used my mum’s iron on it because I was so embarrassed about having afro hair.

“At home, my dad – who was white – absolutely made sure we celebrated our culture. He was the one who told me about my Ashanti heritage, and would talk to me and my younger sister Keshia [now 29 and a member of the Fabulous Beauty Panel] about the slave trade and encourage my mum to make us Ghanaian food.

“But then in the outside world it was different. I remember being a kid and having no idea I was any different from anyone else. Then, when I was nine, a girl at school said to me: ‘Why is your skin always dirty?’ I remember that feeling of shock and humiliation to this day.”

She adds: “I wanted to fit in, so I did anything to try to be like everyone else. I’d have my hair straightened or braided all the time. My dad would tell me to wear it naturally, but I wouldn’t. My mum had wigs, braids and even had her hair relaxed. That was just what we did to fit in.

“I had run-ins with kids at school – I was too black for the white girls and too white for the black girls. I didn’t fit anywhere.”

She says the lack of women of colour in the public eye made it even harder for her to find her identity. But when she started performing at the age of 16, she took inspiration from her idol Mel B and from that point, everything began to change. Fleur finally felt confident enough to wear her curls naturally as she sang in bands around Walthamstow, east London, where she grew up.

I never saw anyone on the television or in films or in magazines who looked like me, but there was Mel B with her hair in a ’fro, looking amazing.

“I never saw anyone on the television or in films or in magazines who looked like me, but there was Mel B with her hair in a ’fro, looking amazing. That was huge for me. I loved singing, I wanted to perform and there she was. I thought she was the most incredible woman I’d ever seen. She didn’t care what anyone thought, she was beautiful and her hair was amazing so when I started singing and performing, I wore my hair like hers.”

Nevertheless, she recalls being in one girl band where she was ordered by management to straighten her hair.

“I was told I couldn’t have my hair natural because another girl had the same hair and ‘we can’t have two of you like that.’ So my hair got straightened and I didn’t feel myself any more. It was like losing who I was.”

Fleur, who has a degree in history and journalism, finally shot to fame in 2014 at the age of 26, when she appeared as a contestant for the second time on The X Factor (she’d competed in 2005 when she was in Addictiv Ladies).

Mentored by Simon Cowell, she made her biggest mark on the show in the semi-final when she performed Mark Ronson’s Uptown Funk, which immediately shot to No.1 in the iTunes charts. Although she came second to Ben Haenow in the grand finale, she looked set for stardom regardless. She also got to know her childhood heroine Mel B, who was a judge on that series.

“She was so harsh on me,” she remembers. “But she came up to me and told me it was because she knew I was really good and she had to push me. She’s amazing. We stayed in touch and she invited me and my sister to the Spice Girls concert at Wembley in 2019, which was just a childhood dream come true.”

However, her dream of becoming the next Beyoncé did not materialise. She signed to Simon Cowell’s Syco label after the show, but they parted company just two years later. Her debut single Sax went  to No.3 in 2015, but the album, Love, Sax And Flashbacks, failed to break the Top 10.

I would have people coming up to me in the street saying: ‘I saw you on X Factor, I thought you were going to be a superstar. What happened?’ That was hard.

“Nothing was happening. I would have people coming up to me in the street saying: ‘I saw you on X Factor, I thought you were going to be a superstar. What happened?’ That was hard.”

Fleur believes there were several reasons for the lack of push from her label. She was a small fish in a big pond that was focused on other money-making artists, and says she can’t discount that the colour of her skin was a factor. 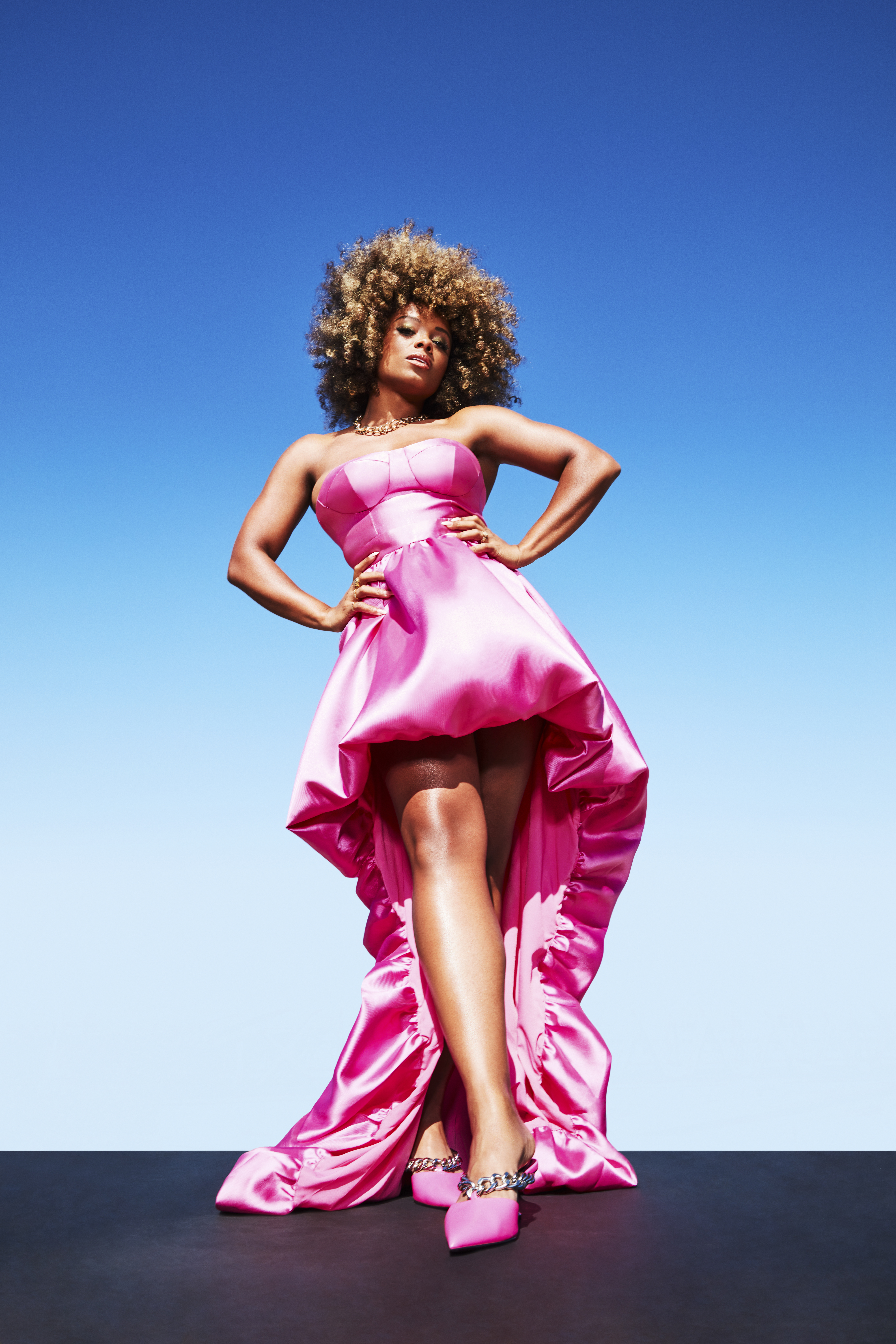 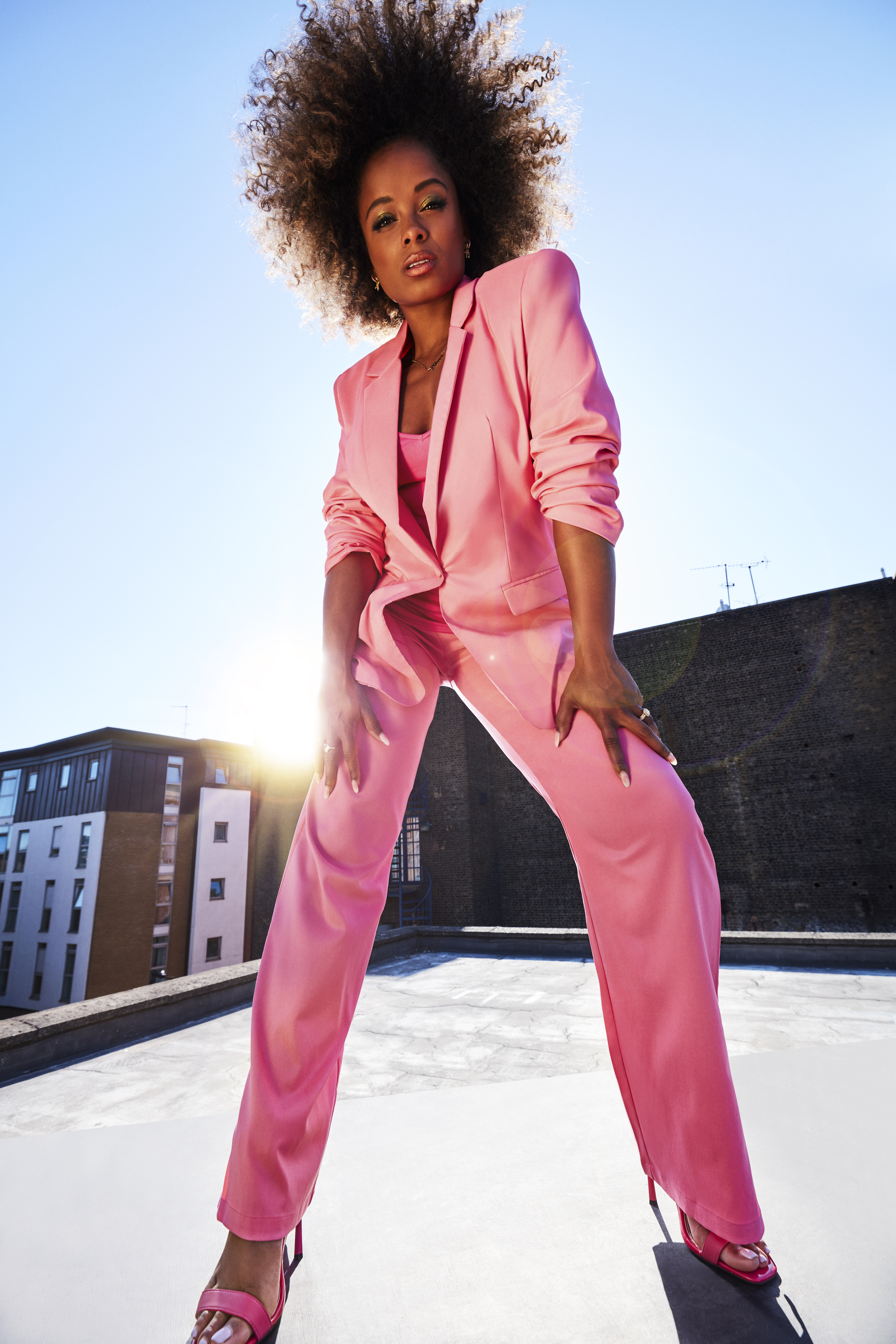 “Simon never had an issue,” she stresses.

“But on The X Factor there was talk among the stylists about what to do with my hair. The words always used to describe my hair by record executives and stylists, even when I was in smaller bands, were ‘wild’, ‘crazy’ and ‘unprofessional’.

The idea was to straighten it, but Simon said: ‘Leave her hair.’ I’ve never had a problem with him. We parted ways amicably. I learnt a lot from him.”

Finding herself without a record deal in 2017 was, she admits, one of the toughest experiences of her life, and she struggled with feelings of depression.

But the woman whose optimistic outlook won her the nickname “Disney” from her French-born fashion designer husband Marcel Badiane-Robin, 33, did not stay down for long.

She says: “Ever since I was a kid I’ve wanted to perform. I’ve sung in nightclubs to one man and his dog, worked as a waitress, lived on a shoestring. That’s why on The X Factor I worked my backside off.

“What was toughest for me after I left the label was thinking that I could not have worked harder. I did every radio show, I went to the gym, I looked after my voice. I did everything that was asked of me, but I didn’t get to be a pop superstar. But I got to be something, and I had to take that something and go with it.”

Over the past few years Fleur has become a “multi-hyphenate”, continuing to release records on her own label, along with appearances on top-rated TV shows, from 2019’s I’m A Celebrity to Don’t Rock The Boat, as a guest judge on I Can Hear Your Voice, and as a host on Hits Radio.

I push myself hard because my dad thought the world of me. He believed I could do anything.

In 2019, she married her partner of 12 years, Marcel, in the Atlas Mountains. Family and friends were there, along with celebrity guests, including her I’m A Celebrity camp mates, Harry Redknapp and JLS star JB Gill.

Ask Fleur if children are now on the cards and she looks pensive. “I don’t see why women are always asked that question,” she says. “I love kids, I see babies in my future, but I feel I have too much to do first.” Too much still to do? She’s already one of the faces of Saturday night television, as well as a DJ and pop star!

“And an actress, too,” she laughs. “I’ve been cast in a movie called Tomorrow Morning, with Samantha Barks and Joan Collins. It’s a romance. I play the best friend of the lead character, and I also get to sing, which is great.”

Ask her why she is so driven, and the conversation turns to her father Malcolm, who died from a heart attack, just weeks before lockdown in March 2020. Although she smiles as she talks, tears begin to form in her eyes.

“My dad was everything to me,” she says quietly. “He believed in me, he supported me, and every step of my life he was there for me and my sister. Losing him was devastating, and in so many ways going into lockdown was a blessing for me and my family to have time to deal with it. But I haven’t got over the loss. It still hits me every day.”

Husband Marcel has been her rock throughout the grieving process. “I am amazingly blessed to have these wonderful men in my life,” she says. “But really I push myself hard because my dad thought the world of me. He believed I could do anything.

I’m fully aware that little girls like me are watching me on television, and it makes me happy to think they are seeing someone like them.

“He wanted me to be proud of who I am exactly as I am, so everything I do is for him. My big hair is for me, for little brown girls out there, and for him because he always told me to celebrate these curls and show people who I am: his daughter who is never going to give up.”

She ruffles her hair. The hair that makes a statement on prime-time Saturday night television that change has happened in the past few years.

“I’m so conscious of that. I’m fully aware that little girls like me are watching me on television, and it makes me happy to think they are seeing someone like them.” 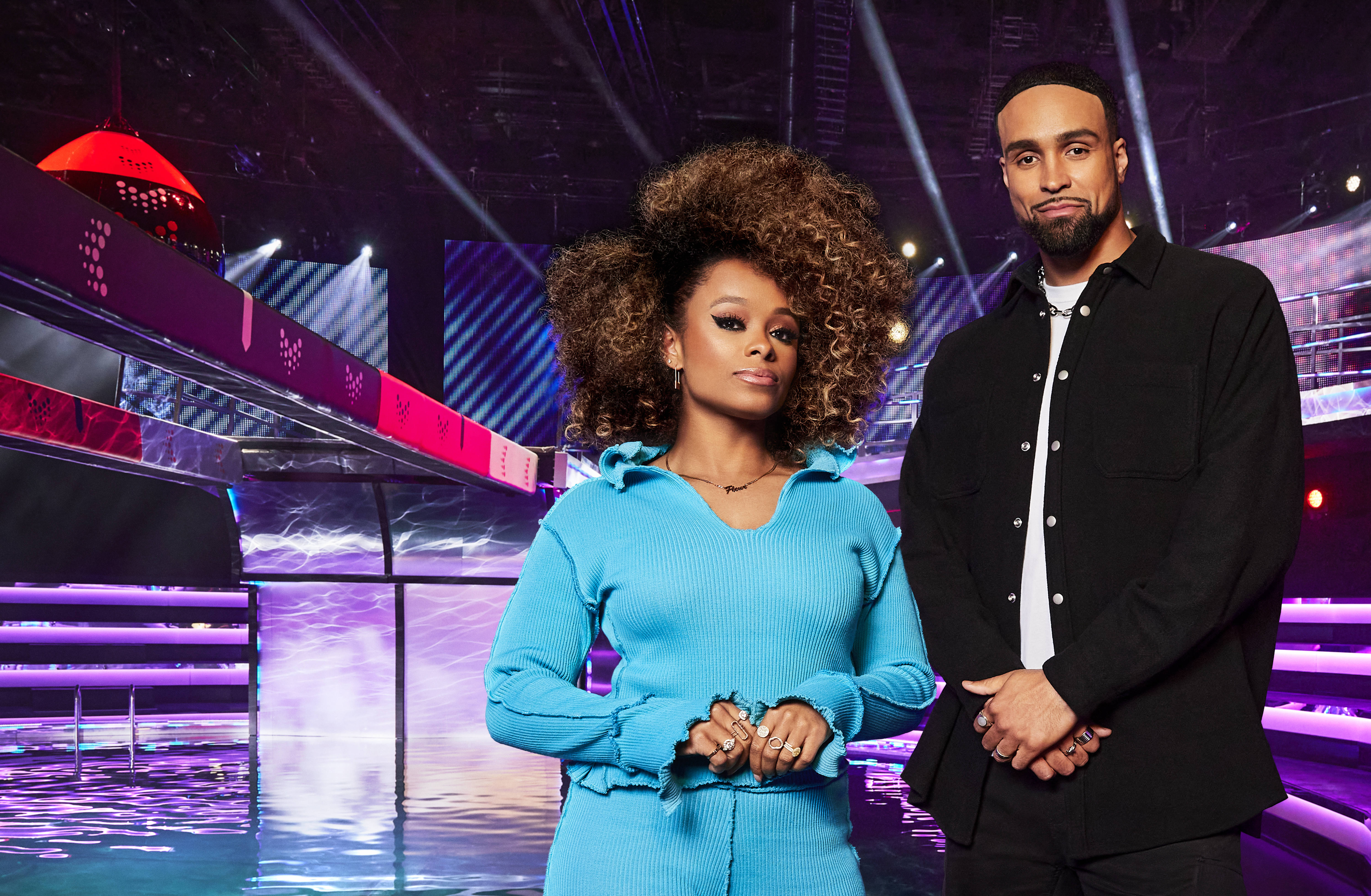 Fleur, who presents, says ‘I’m fully aware that little girls like me are watching me on television, and it makes me happy to think they are seeing someone like them’Credit: Mark Hayman 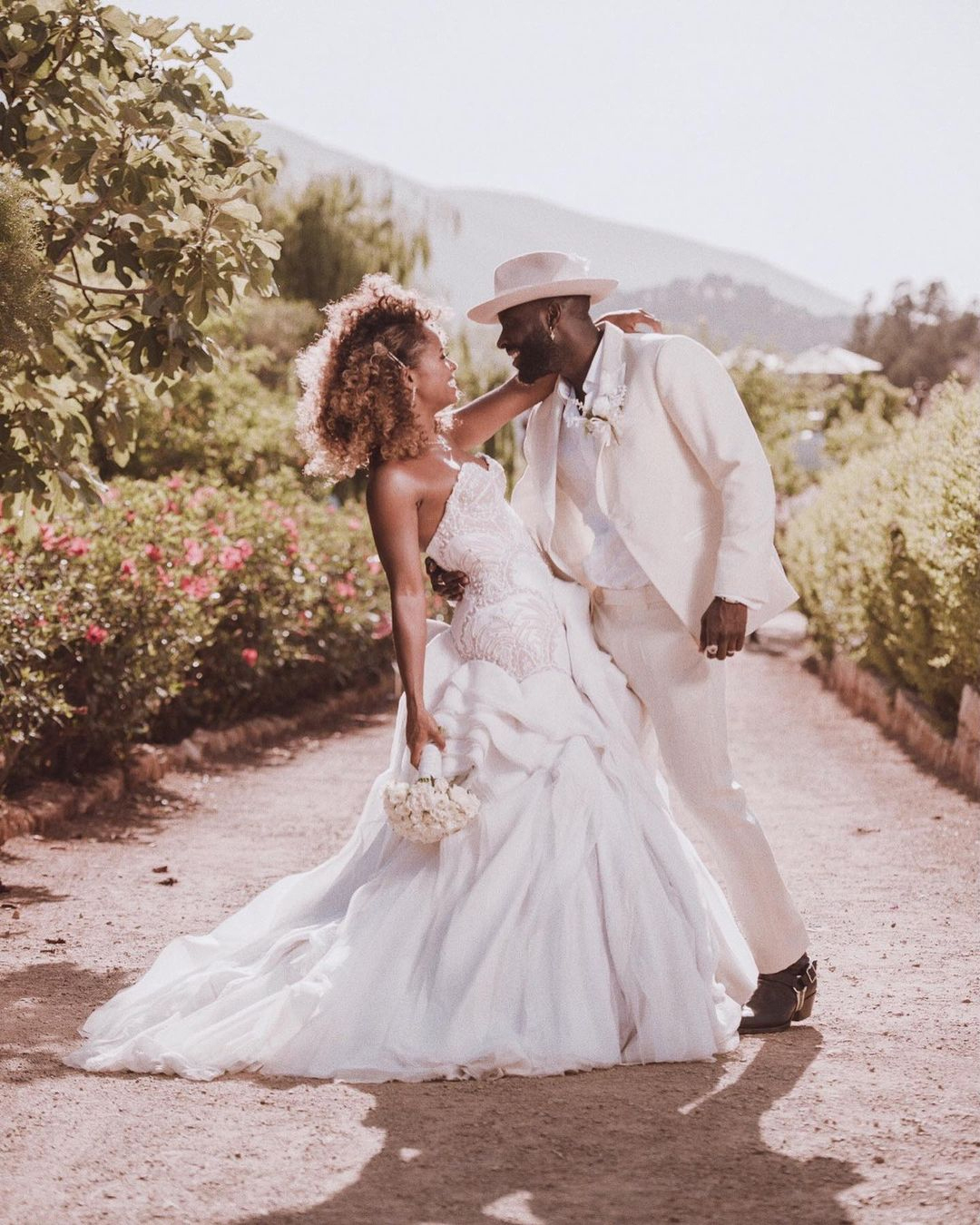 In 2019, she married French-born fashion designer husband Marcel Badiane-Robin and says ‘I am amazingly blessed to have these wonderful men in my life’Credit: Instagram/Fleur East 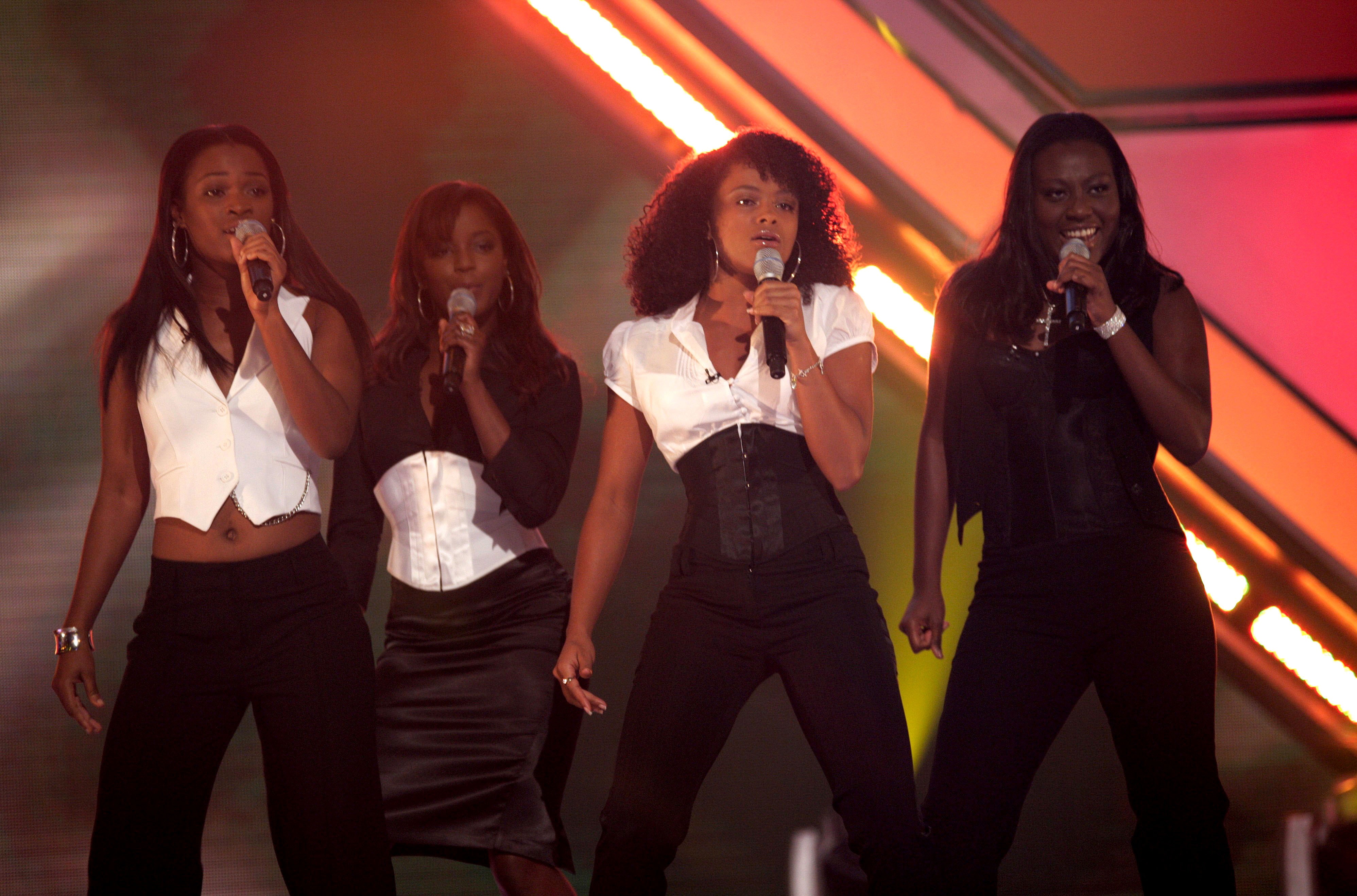 Fleur has continued to release records on her own label after parting ways with Simon Cowell’s Syco label just two years after being on the X FactorCredit: Shutterstock Editorial

In the make-up chair with Fleur