IN the decade since her wedding, Kate Middleton has become a global style icon. 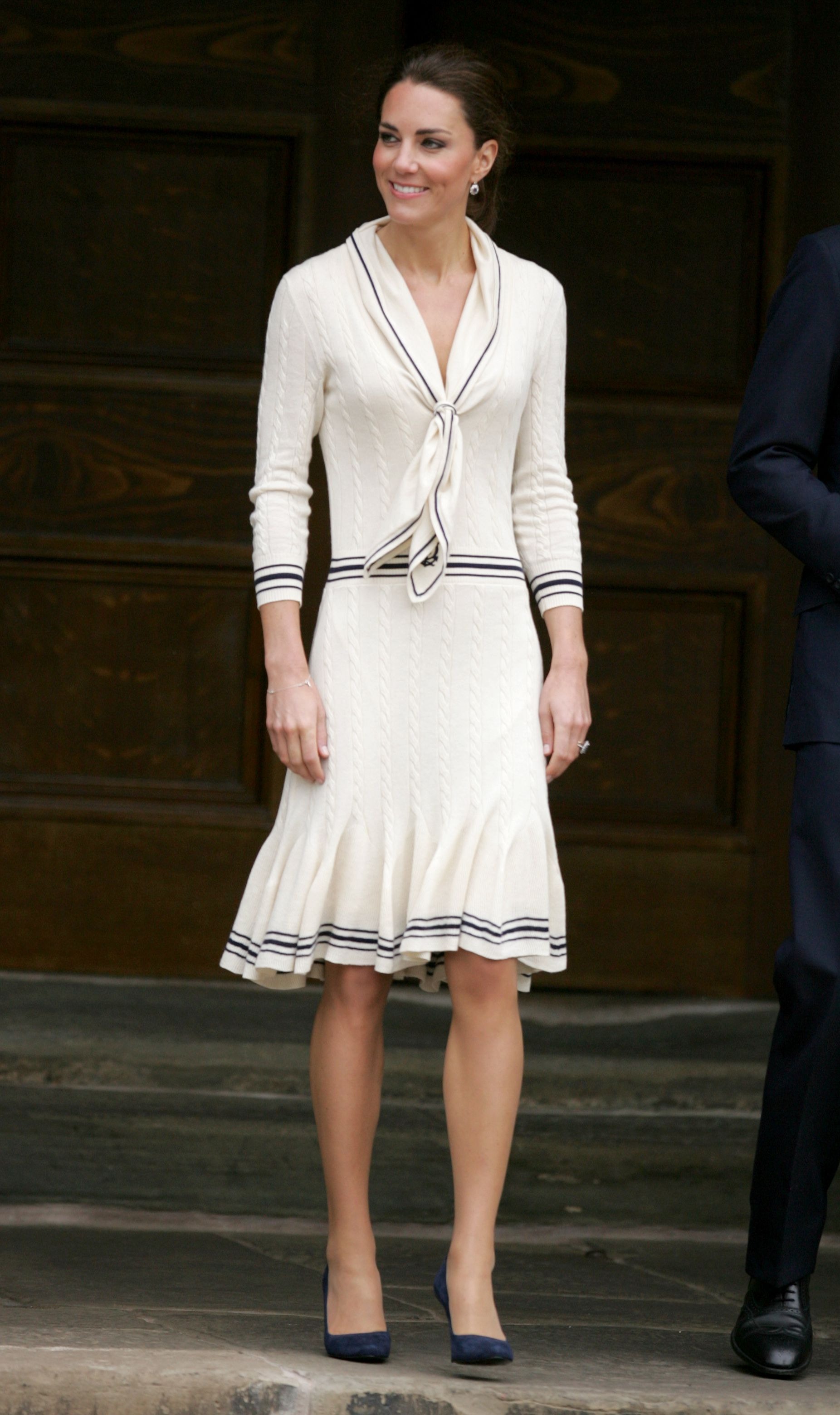 NEWLYWED Kate instantly set out her fashion stall on her first royal tour of Canada in June.

This gorgeous nautical co-ord was designed by Sarah Burton for Alexander McQueen, the designer Kate worked with on her wedding dress.

The close relationship between the two has led to many more exciting collaborations over the last decade, with Sarah being responsible for some of the Duchess’ most iconic looks.

At the premiere of War Horse she donned a stunning lace gown by Temperley LondonCredit: Getty

KATE dazzled in this stunning lace dress by Temperley London at the UK premiere of War Horse in Leicester Square.

The gown, with bracelet sleeves and fitted bodice, was a total hit and inspired hundreds of high-street copies.

She wore it again later in the year for a St Andrews fund-raiser, and again in 2013 for the screening of David Attenborough’s Natural History Museum Alive 3D, showing off her eye for style and sustainability. 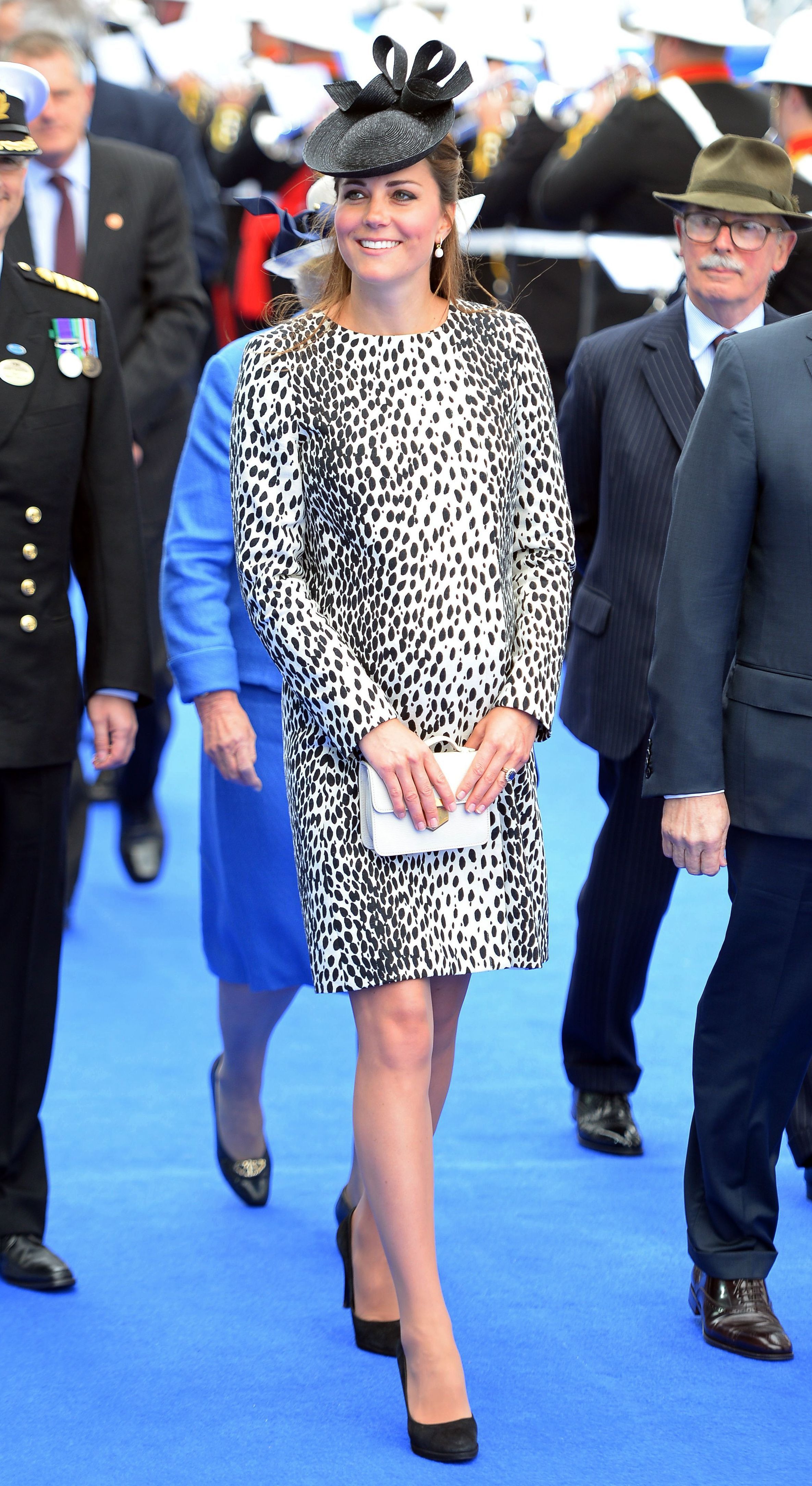 The Duchess was radiant as she wore a cute Dalmatian-print mac from HobbsCredit: Shutterstock

EIGHT months pregnant with Prince George, the Duchess was radiant as she named the Royal Princess cruise ship in Southampton.

Her cute Dalmatian-print mac from Hobbs and the white box bag are nods to the ’60s, while a Jane Taylor hat and LK Bennett shoes finish the look.

It’s great to see Kate support the high street, and the coat – which sold out in minutes – was a maternity favourite, as she wore it again while pregnant with Princess Charlotte. 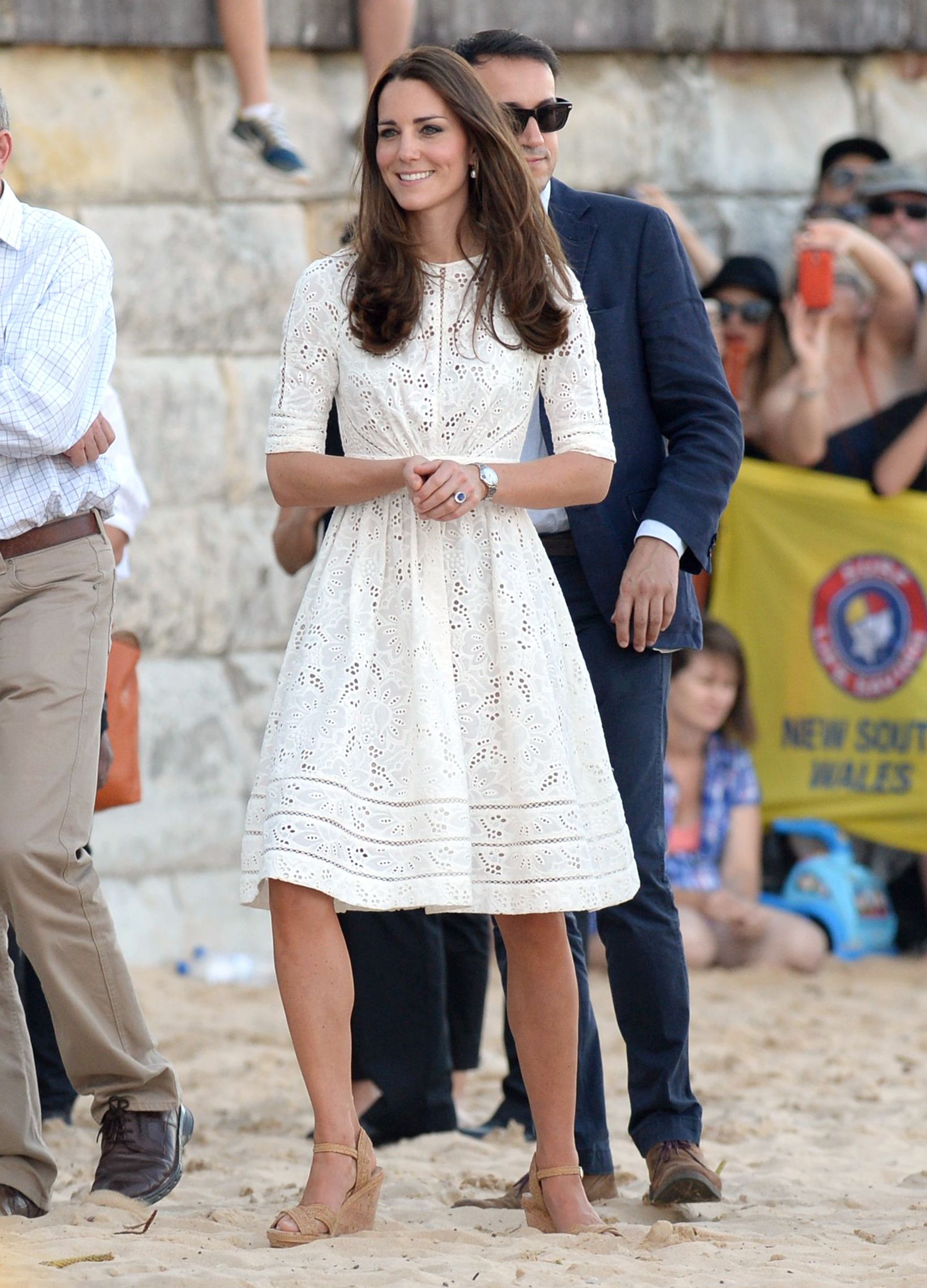 During a 2014 Australian tour, Kate wowed in a broderie anglaise dress by ZimmermannCredit: Shutterstock

KATE’S Australian royal tour wardrobe in April was a triumph!

Working with her PA/stylist Natasha Archer, and various Australian department stores and design houses, she chose outfits by cool Oz brands – including this broderie anglaise dress by Zimmermann, teamed with raffia wedges by Stuart Weitzman.

Shoppers, keen to get their own Zimmermann frock, crashed the brand’s website when Kate wore it for her first speech Down Under. 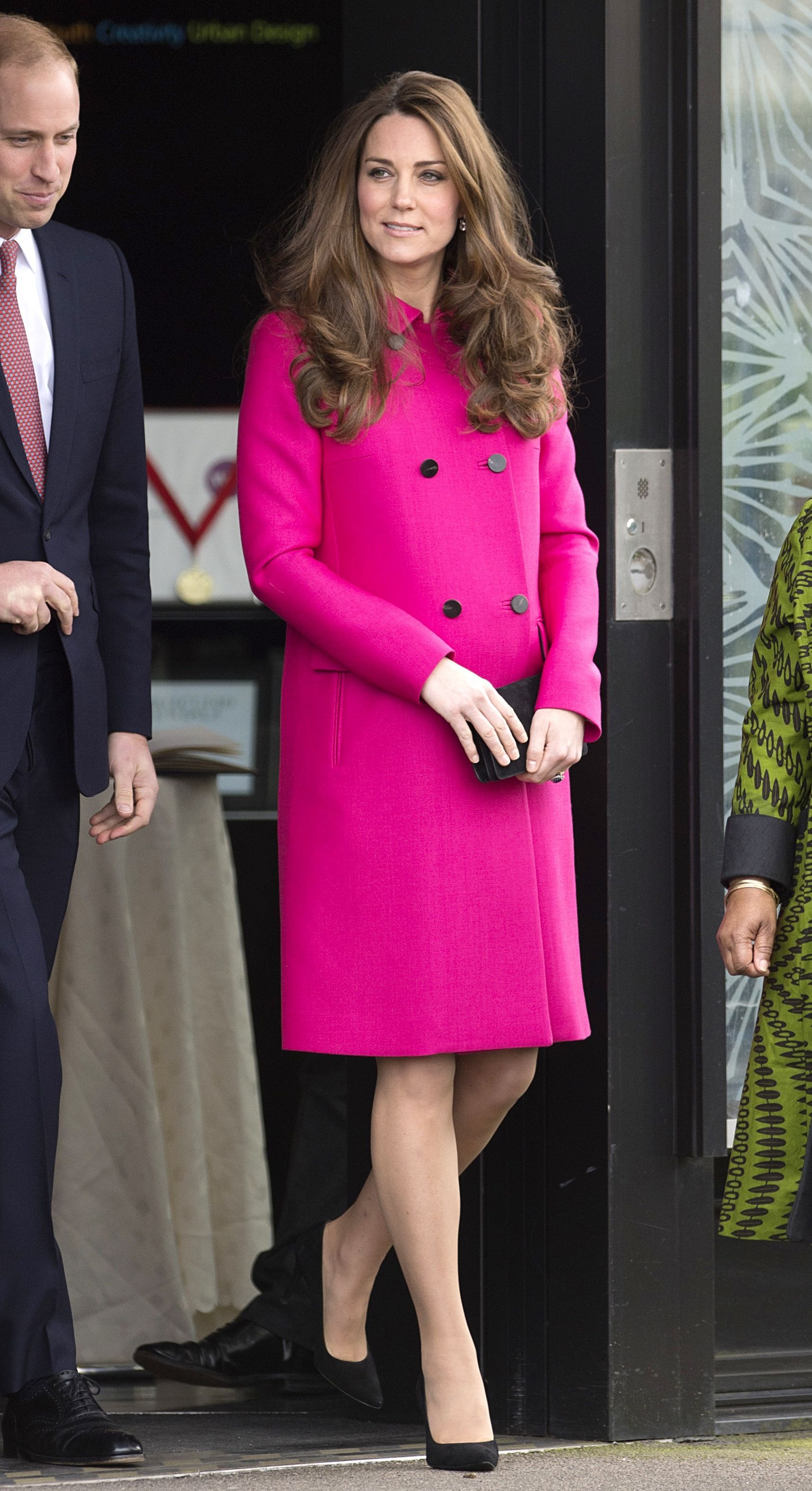 Pregnant Kate was positively radiant when she stepped out in a hot-pink Mulberry coat in 2015Credit: Shutterstock

THIS striking hot-pink coat by British label Mulberry looked fantastic on Kate when she visited the Stephen Lawrence Centre in south London.

She was heavily pregnant with Princess Charlotte, and this March engagement was her last before her daughter’s birth.

The subtle A-line cut of the coat showcases her bump, while simple black accessories finish the look to perfection. And can we just take a moment to appreciate her hair? Wow! 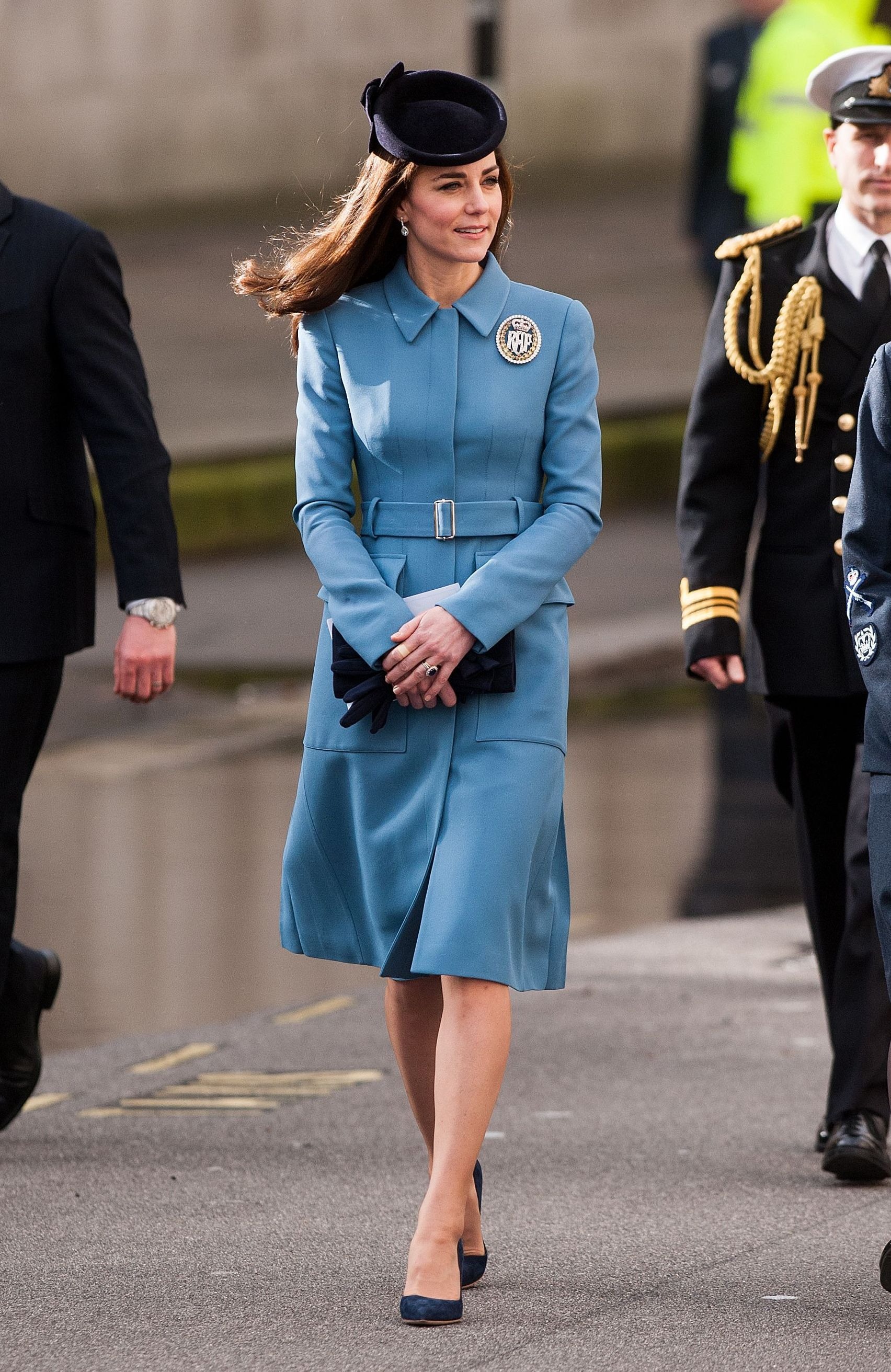 The Duchess stepped out in this powder-blue number for the third time the following yearCredit: Shutterstock

This engagement in February (her first as patron of the RAF Air Cadets, after taking over from Prince Philip) was the third time she’d stepped out in this powder-blue number by Sarah Burton for Alexander McQueen.

On this occasion she accessorised with a huge diamond Air Cadets Dacre Brooch, a smart Lock & Co hat and Rupert Sanderson heels. We salute you, Kate!

In 2017 Kate proved she’s an Alexander McQueen fan as she stepped out in another designer gownCredit: Getty

BACK on the red carpet in yet another Alexander McQueen gown, Kate looked sensational with Prince William at her side.

This tiered dress with an off-the-shoulder neckline and pretty floral print was complemented by a chic up-do, making Kate the belle of the BAFTAs ball at the Royal Albert Hall in February.

She stunned in a fabulous tweed piece at a V&A eventCredit: Getty

AFTER becoming the patron of the V&A, the Duchess opened its new Photography Centre wearing this fabulous tweed piece by Erdem.

The British designer is one of Kate’s favourites, and this midi-dress was from his spring collection, which paid homage to the young Queen Elizabeth’s wardrobe and her love of jazz and dancing.

The length is great on Kate and the asymmetrical neckline and burgundy ribbon belt make it even more interesting.

THIS was the year Kate started wearing the trousers! Despite rumours that she had replaced her stylist, Natasha Archer was actually on maternity leave.

These Massimo Dutti wide-leg chinos, worn with a pretty shirt from M.i.h Jeans and Superga plimsolls, were a winner at the Chelsea Flower Show.

Kate’s relaxed style oozes confidence and shows that she’s as comfortable dressing down as she is dressing up. 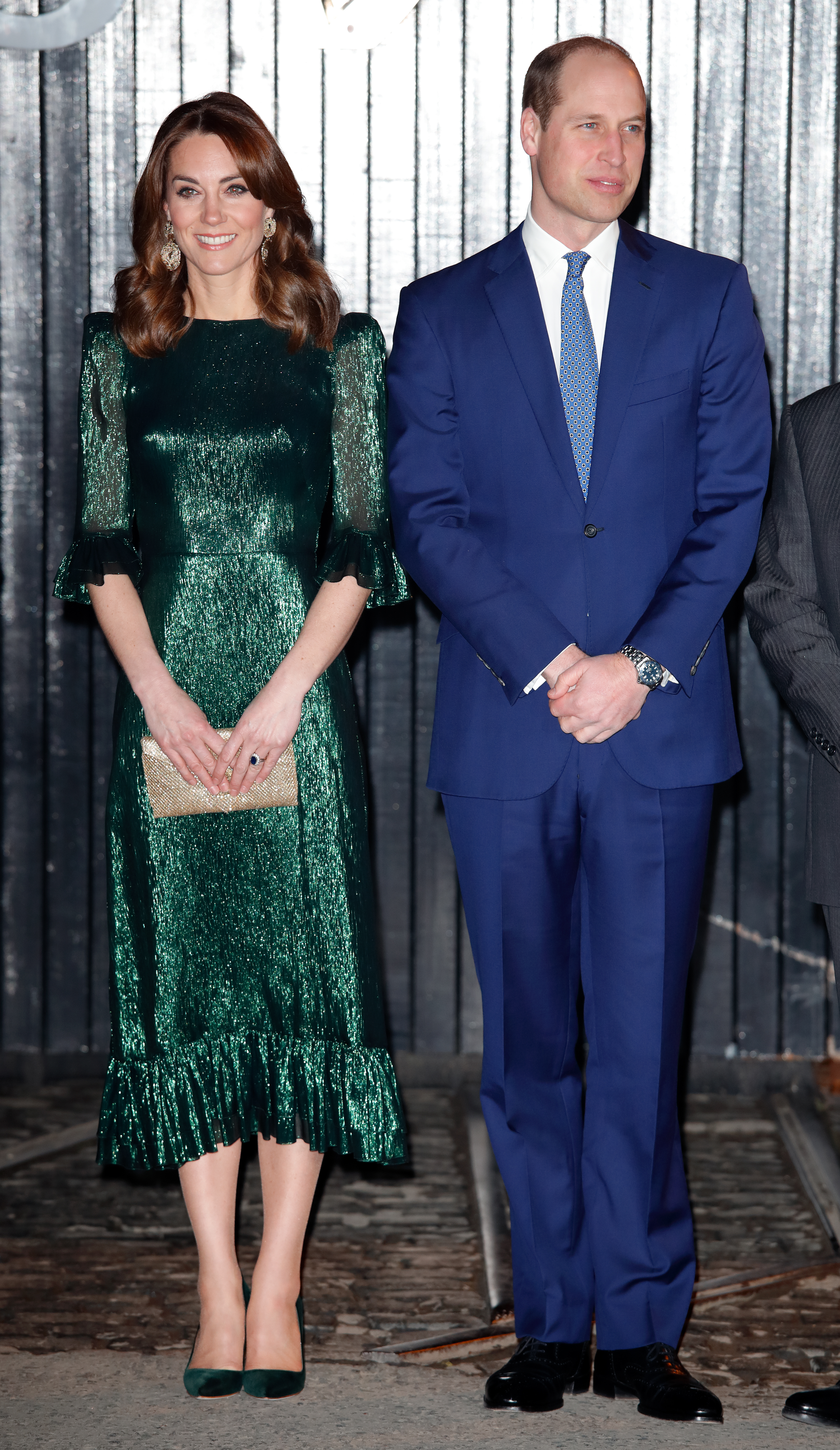 Before lockdown Kate was pictured with her prince in a gorgeous green dress by The Vampire’s WifeCredit: Getty

JUST before lockdown, Kate and Wills had an official visit to the Guinness Storehouse in Dublin, and Kate chose this gorgeous green dress by The Vampire’s Wife for her visit to the Emerald Isle.

Designed by Susie Cave, wife of singer Nick, this label is an edgy collection of gothic-style dresses loved by stars such as Thandie Newton and Alexa Chung.

The metallic fabric, puffed sleeves and tiered skirt looked stunning on Kate as she happily sipped a Guinness.