Shutting down the rumor mill? Duchess Kate‘s uncle isn’t convinced by Meghan Markle‘s version of what went down between the two women ahead of the Duchess of Sussex’s May 2018 wedding to Prince Harry.

“I don’t believe for a moment that Kate made Meghan cry,” Gary Goldsmith told The Daily Mail weeks after the Suits alum, 39, and her husband, 36, sat down for a bombshell CBS interview about their experience in the British royal family. “I’ve known Kate since she was born and she doesn’t have a mean bone in her body. It’s just simply not in her nature.”

Carole Middleton‘s brother, 55, told the outlet that his niece, 39, is “even lovelier on the inside than on the outside” and “would have been trying to make the peace” in any tense situation. “If anyone had a hissy fit, it must have been Meghan,” he added. 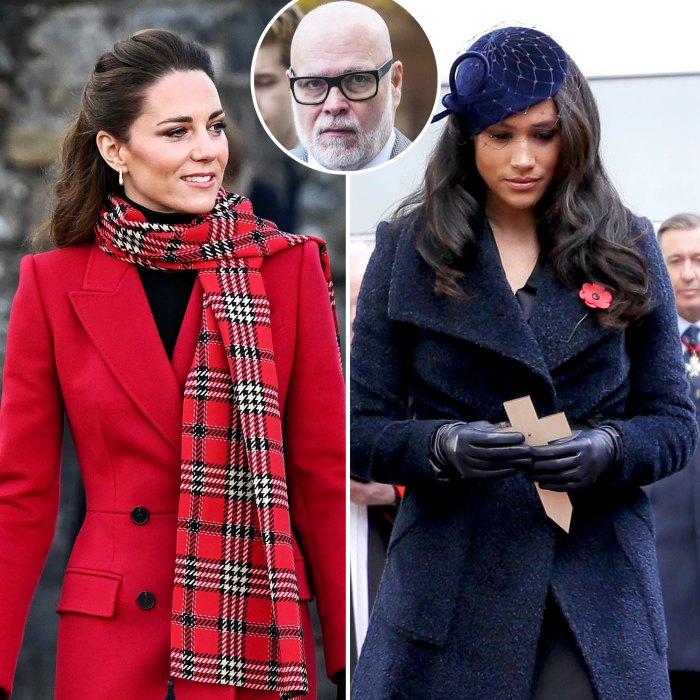 Rumors of bad blood between the sisters-in-law began to swirl long before the Duke of Sussex and his wife announced in January 2020 that they were stepping away from their senior royal roles. During her eye-opening CBS interview, which aired on March 7, the Los Angeles native spoke candidly about her relationship with Prince William‘s wife.

“The narrative with Kate, it didn’t happen,” Meghan said of reports that she made Kate cry in the days leading up to her and Harry’s nuptials. “The reverse happened. A few days before the wedding she was upset about flower girl dresses and it made me cry. It really hurt my feelings.”

Meghan admitted that it was a “really hard week” for the family before she walked down the aisle and acknowledged that Kate “owned” her mistake. “She apologized,” the former lifestyle blogger said. “And she brought me flowers and a note, apologizing. And she did what I would do if I knew that I hurt someone, right, to just take accountability for it.”

Shortly before the tell-all made headlines, Buckingham Palace confirmed in February that Meghan and Harry were not returning as working royals. The news came days after the pair announced Meghan’s second pregnancy. (The couple welcomed son Archie in May 2019.)

Since stepping away from the royal spotlight, the Sussexes and the Cambridges have grown distant. Earlier this month, a source told Us Weekly exclusively that Meghan and Kate haven’t spoken “directly in over a year.”

“They were never that close, but the reason they’re not speaking is because of the rift between Prince Harry and Prince William,” the insider said. “Harry and William have communicated sparingly over the last year, but none of their communications have been friendly in quite some time. There is real animosity that the brothers have toward one another, and that has spilled over to Meghan and Kate’s relationship, making it very hard for them to be friends or even friendly.”

A separate source later revealed that “Kate will eventually speak out” and share her side of the story, especially because she “feels that there was a misunderstanding” about the flower girl situation. “She didn’t like that she was called out by name when many of the other members of the royal family were not,” the insider added.