Telling all! Drew Barrymore dished on her sex life, skinny dipping experiences and more while fielding a round of dirty questions from pal Ross Mathews on The Drew Barrymore Show.

The Charlie’s Angels actress, 45, gasped and covered her face with her hands when Mathews, 41, asked if she’s ever “totally got it on” in someone’s car. “Who hasn’t?!” Barrymore teased, winking at the camera as she pretended to be scandalized by the NSFW question.

The hilarious reveal followed a series of juicy details about her personal life, including her preference when it comes to setting the mood before getting intimate. 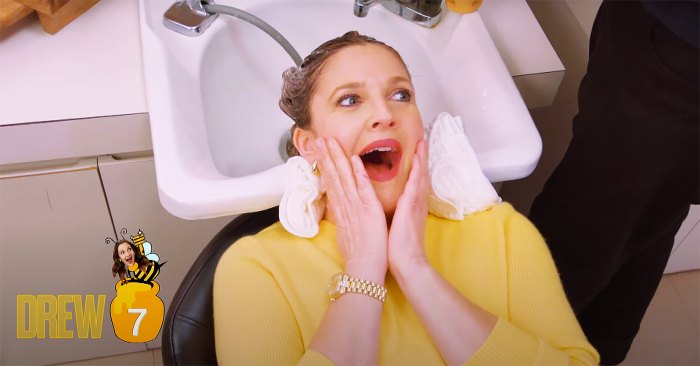 “I’m very weird about lighting. I like natural light from the day or very soft lights,” Barrymore said when asked if she likes the lights on or off in the bedroom. “I’m very lighting sensitive all the time.”

Barrymore also admitted that she’s dropped her name in order to get a reservation at a chic restaurant and that she’s a big fan of going skinny dipping.

“I love a good skinny dip!” she exclaimed. “It’s so fun. Maybe it’s more of a girl thing, I definitely do that with my girlfriends [or] my daughters [Olive, 8, and Frankie, 6]. Just off with the clothes and into the water.”

Since her talk show premiered in September 2020, the 50 First Dates star has shared plenty of candid moments with her audience. After nearly 15 years of not speaking to ex-husband Tom Green, the former couple had an emotional reunion on the daytime series.

“It’s been too long, it’s nice to reconnect,” Green, 49, said in September, noting that it was the first time he and Barrymore had “looked at each other face-to-face” in over a decade. “I couldn’t be more excited for your new show. It’s nice to see you every day on here, just bringing this burst of happiness and energy and optimism to the world right now.”

The actors were married from 2001 to 2002. During a recent interview on The Tonight Show Starring Jimmy Fallon, Barrymore opened up about why she chose to share her and Green’s reunion with the world.

“There were no questions prepared for that. I had an offline conversation with him because we didn’t want it to be some bougie Hollywood moment like, ‘Let’s reconnect in front of the cameras,’” the Blended star explained. “But that said, the thing that I love about Tom was he is one of the first people to have put a camera on his life. … It was nice to hear from people saying like, ‘I’d like to have that with someone from my past.’”

Barrymore was also married to Jeremy Thomas from 1994 to 1995 and Will Kopelman, with whom she shares two kids, from 2012 to 2016. Before Kopelman, 42, got engaged to Alexandra Michler in January, his ex-wife admitted that she took their divorce “really hard.”

“I think it applies to everyone who thinks that something will be forever and it’s not. It’s so hard,” Barrymore said in an October 2020 interview with Willie Geist. “It’s like, I don’t think I’ve recovered from that.”

New postcode checker reveals where you can get rapid Covid tests