Costar connection? Some fans think that Jodie Foster could be responsible for bringing Aaron Rodgers and rumored fiancée Shailene Woodley together after he thanked her in his NFL Honors MVP speech earlier this month.

The Green Bay Packers quarterback, 37, gave a shout-out to a list of “off the field” supporters while accepting the AP Most Valuable Player award on Saturday, February 6, shortly after he revealed that he is engaged. In between giving thanks to “Debbie” and “Chaz,” the athlete said, “Jodie Foster.”

Rodgers appeared to namedrop the Panic Room actress, although he has yet to confirm whether it was the 58-year-old Oscar winner or someone else with the same name. Eagle-eyed fans pointed out that Foster could be connected to the quarterback through Woodley, 29. 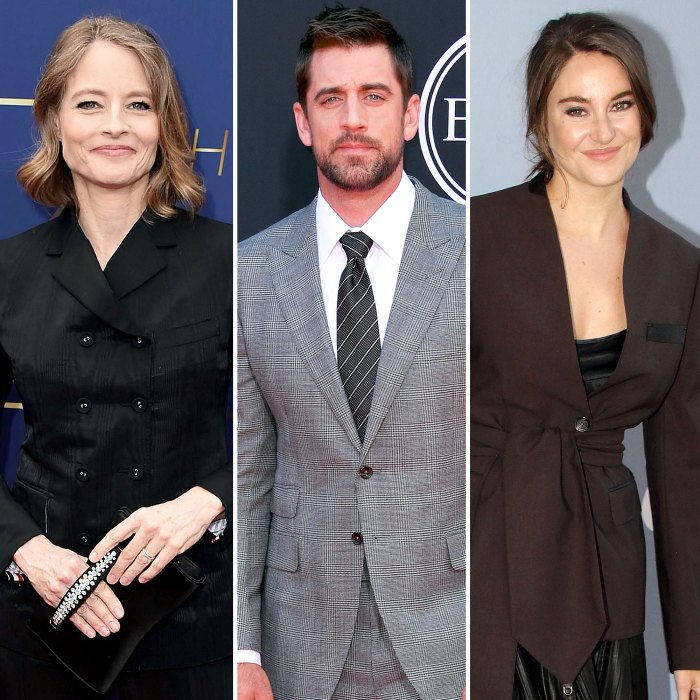 The actresses are costars in the upcoming film The Mauritanian, which comes out later this month. Some have speculated that filming the thriller led to Foster becoming friends with Rodgers thanks to his relationship with the Divergent actress. Other fans questioned if Foster was already pals with Rodgers — she is a well-known Packers fan — before working with Woodley and therefore introduced the couple.

Us Weekly confirmed earlier this month that the Fault in Our Stars actress and Rodgers were dating after being linked in July 2020.

“They started off as friends, but things have turned romantic,” a source told Us at the time. “The two are staying in contact while they are living away from each other. The relationship is long-distance for right now, but they are making it work.”

Less than a week after news of the couple’s romance broke, Rodgers announced his engagement.

“2020 was definitely a crazy year filled with lots of change, growth, some amazing, memorable moments, 180 straight days of having my nose hair scraped, playing for very little fans or no stands the entire season,” Rodgers said during his MVP speech on Saturday. “I got engaged and I played some of the best football in my career.”

He continued: “So I’d like to thank, first and foremost, my teammates for their support, their inspiration, protection, incredible play on the field.”

The former University of California, Berkley quarterback then honored a bunch of people from his “team”off the field before giving a special nod to “my fiancée.”

The engagement news came seven months after Us confirmed in July 2020 that Rodgers and Danica Patrick were “no longer together” after more than two years of dating.

The Big Little Lies actress confirmed her split from rugby player Ben Volavola in April 2020, three years after the pair were first linked.

Storm Darcy: Coldest night in 10 years with temperatures of -18C