It was fun while it lasted! Chrissy Teigen announced on Wednesday, March 24, that she was leaving Twitter after spending 10 years on the platform.

The 35-year-old posted a statement directly to her fans before swiftly deactivating her account for the last time.

“For over 10 years, you guys have been my world. I honestly owe so much to this world we have created here. I truly consider so many of you my actual friends,” the model tweeted. “But it’s time for me to say goodbye. This no longer serves me as positively as it serves me negatively, and I think that’s the right time to call something.” 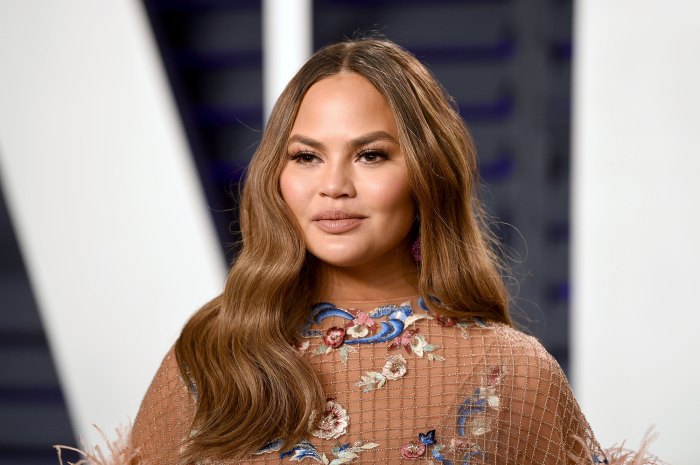 Shortly before Teigen’s announcement, the social media platform was in an uproar over her recent collaboration with Kris Jenner. The duo announced an upcoming plant-based cleaning product line that received major backlash, with some calling Teigen a “sellout”.

“I’ve always been portrayed as the strong clap back girl but I’m just not,” the cookbook author continued. “My desire to be liked and fear of pissing people off has made me somebody you didn’t sign up for, and a different human than I started out here as! Live well, tweeters. Please know all I ever cared about was you!!!” 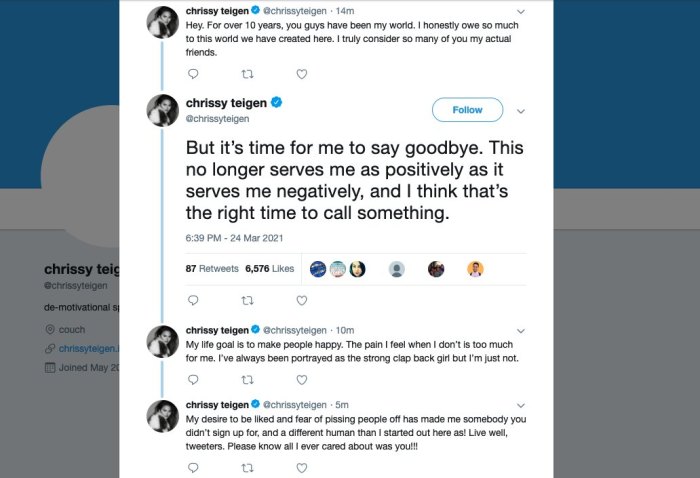 Teigen ended her lengthy post with, “I encourage you to know and never forget that your words matter. No matter what you see, what that person portrays, or your intention. For years I have taken so many small, 2-follower count punches that at this point, I am honestly deeply bruised.”

This isn’t the first time that the Cravings author had to respond to online critics. Teigen faced controversy for documenting her trip to Joe Biden‘s inauguration in January with her husband, John Legend, and their two children, Luna, 4, and Miles, 2. The couple lost their third child, Jack, in September 2020 after suffering a placenta abruption.

Teigen responded to the backlash at the time, writing, “For f–ks sake why are you guys always always made [SIC] at me, all I wanna do is make you happy or at least leave you with a neutral feeling of indifference.” In a second tweet, she added: “This is not my fault but I’m sorry you’re frustrated. I just like to share what we are up to and whatnot.”

Teigen, however, did keep her followers entertained throughout the years via Twitter. She poked fun at her famous crying meme from the 2015 Golden Globes Awards and shared on Twitter, “may she forever live in the past lol.”