Defending her friend. Chrissy Teigen called on critics of her former costar Meghan Markle to “f—king stop it” ahead of the duchess’ tell-all interview with Prince Harry.

“This meghan markle s—t is hitting too close to home for me,” the Lip Sync Battle cohost, 35, tweeted on Friday, March 5. “These people won’t stop until she miscarries. f—king stop it.” 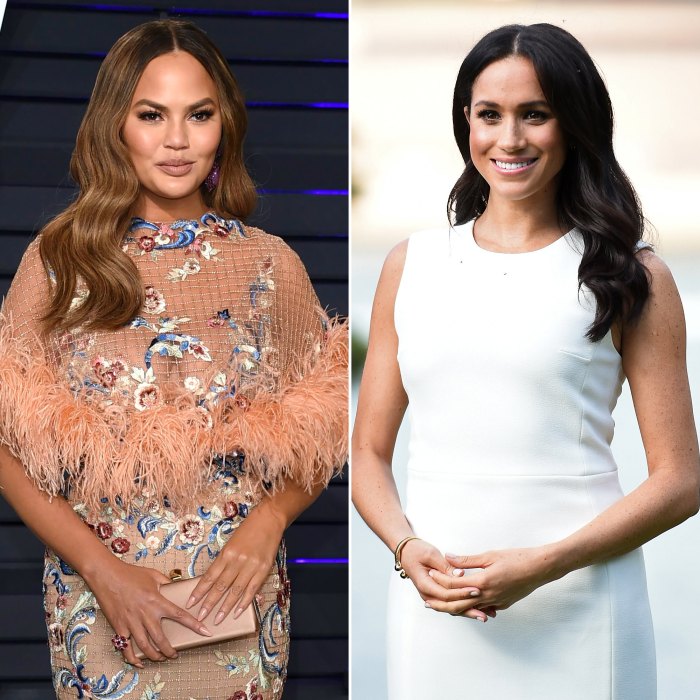 Teigen and Markle, 39, who is pregnant with her second child with Harry after a miscarriage last year, met when they were both models on the game show Deal or No Deal in 2007.

The former Sports Illustrated cover girl spoke to the Daily Mail in November 2018 about her admiration for the former Suits star.

“I am especially a fan of Meghan,” she told the outlet. “I was on Deal or No Deal with her and she was lovely. Now everyone asks me what she was like and I say, ‘Sorry, no dirt. She’s gorgeous.’”

“I love the freshness she brings, and her cookbook Together [featuring recipes from women affected by London’s Grenfell Tower fire] is my only pre-order of the year. It’s beautifully done and you can tell how important it is to her,” she continued. “You see how she interacts with people and gets down to eye level with kids.”

“This guy… this guy sucks,” she tweeted after the former lighting director slammed his daughter in the press. “What is wrong with him? Let your daughter be happy, please. This is embarrassing.”

Teigen is one of many of Meghan’s celebrity friends speaking out in defense of her days before her no-holds-barred interview with Prince Harry airs on CBS on Sunday, March 7.

Buckingham Palace announced earlier this week that it is conducting an official investigation into claims published by The Times that Meghan bullied royal aides before she and Harry stepped down as senior members of the royal family and moved to the U.S. last year.

A rep for Meghan said in a statement to Us Weekly on Tuesday, March 2, that “the Duchess is saddened by this latest attack on her character, particularly as someone who has been the target of bullying herself and is deeply committed to supporting those who have experienced pain and trauma.”

Her spokesperson added that Meghan “is determined to continue her work building compassion around the world and will keep striving to set an example for doing what is right and doing what is good.”

Her former Suits costars and other friends including the show’s creator, Aaron Korsh, and executive producer Silver Tree have taken to social media to share heartwarming stories about Meghan amid the attacks in the press.

“She has always been a powerful woman with a deep sense of morality and a fierce work ethic and has never been afraid to speak up, be heard and defend herself and those she holds dear. Like the rest of the world, I have watched her navigate the last few years in astonishment,” he continued before directing his anger toward the trolls who have targeted her since she married Harry.

“It sickened me to read the endless racist, slanderous, clickbaiting vitriol spewed in her direction from all manner of media across the UK and the world,” the 39-year-old wrote. “But I also knew that Meghan was stronger than people realized or understood and they would regret underestimating her.”

Adams also took aim at the British royal family, calling it “obscene” that the palace “is promoting and amplifying accusations of ‘bullying’ against a woman who herself was basically forced to [flee] the U.K. in order protect her family and her own mental health.”