Charisma Carpenter is speaking out against Buffy creator Joss Whedon.

The actress, 50, released a lengthy statement via Instagram on Wednesday, February 10, after years of alluding to negative experiences with the 56-year-old showrunner. “My truth,” she captioned the post, which appeared on both her Twitter and Instagram accounts.

“For nearly two decades, I have held my tongue and even made excuses for certain events that traumatize me to this day,” Carpenter began. “Joss Whedon abused his power on numerous occasions while working on the sets of Buffy the Vampire Slayer and Angel. While he found his misconduct amusing, it only served to intensify my performance anxiety, disempower me, and alienate me from my peers. The disturbing incidents triggered a chronic physical condition from which I still suffer. It is with a beating, heavy heart that I say I coped in isolation and, at times, destructively.” 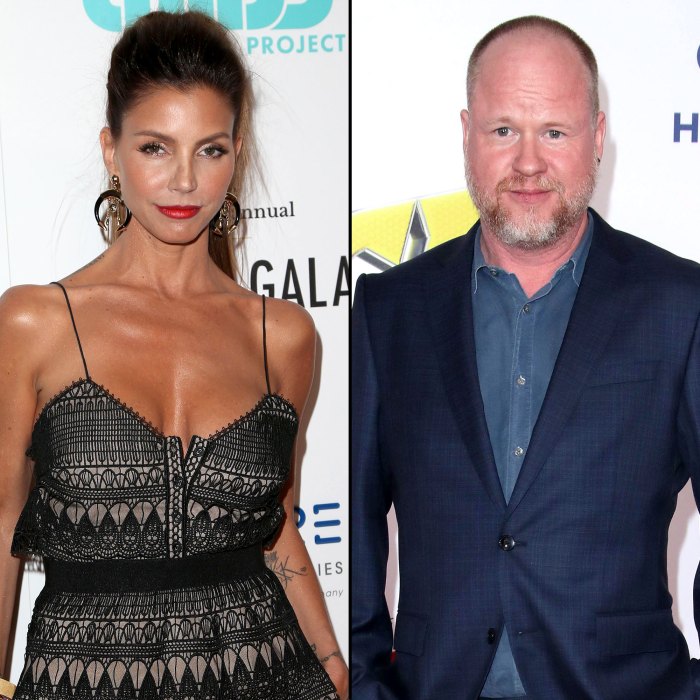 Carpenter continued: “Last summer when Ray Fisher publicly accused Joss of abusive and unprofessional behavior toward the cast and crew during reshoots on the Justice League set in 2017, it gutted me. Joss has a history of being casually cruel. He has created hostile and toxic work environments since his early career. I know because I experienced it first-hand. Repeatedly.”

Detailing his alleged misconduct, the Expendables star said Whedon made “ongoing passive-aggressive threats to fire” her. She also accused him of “callously calling me ‘fat’ to colleagues when I was four months pregnant, weighing 126 lbs.” Carpenter also claimed that while she was six months pregnant, she was ordered to come to work at 1 a.m. 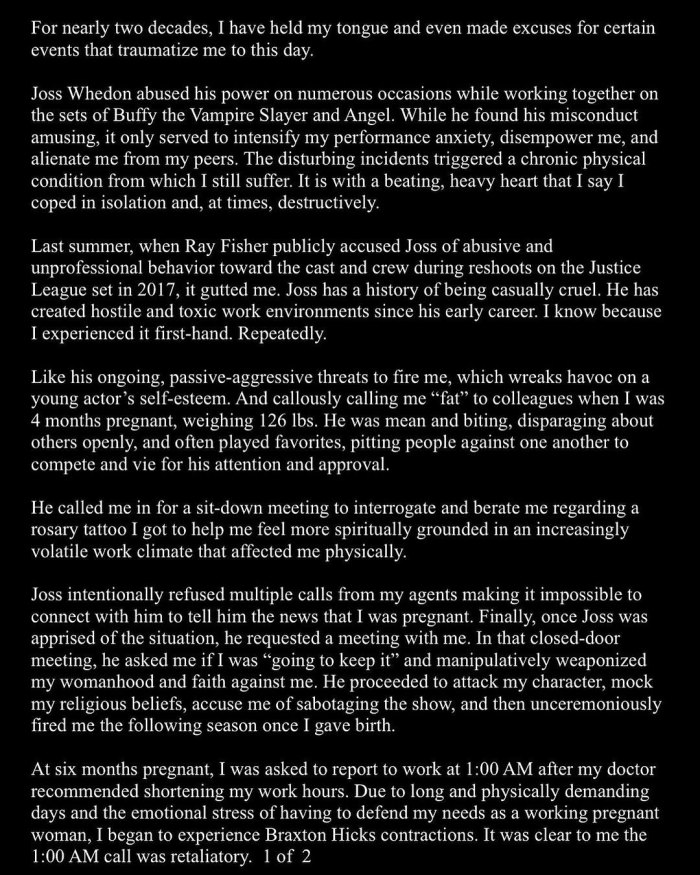 “Our to [sic] long and physically demanding days and the emotional stress of having to defend my needs as a working pregnant woman, I began to experience Braxton Hicks contractions. It was clear to me that 1 a.m. call was retaliatory,” the Charmed alum alleged on Instagram.

Carpenter’s statement went on to say, “He was mean and biting, disparaging about others openly, and often played favorites, putting people against one another to compete and vie for his attention and approval. He called me for a sit-down meeting to interrogate and berate me regarding a rosary tattoo I got to help me feel more spiritually grounded in an increasingly volatile work climate that affected me physically.”

She noted that she “felt powerless and alone” at the time. “I swallowed the mistreatment and carried on,” Carpenter revealed. 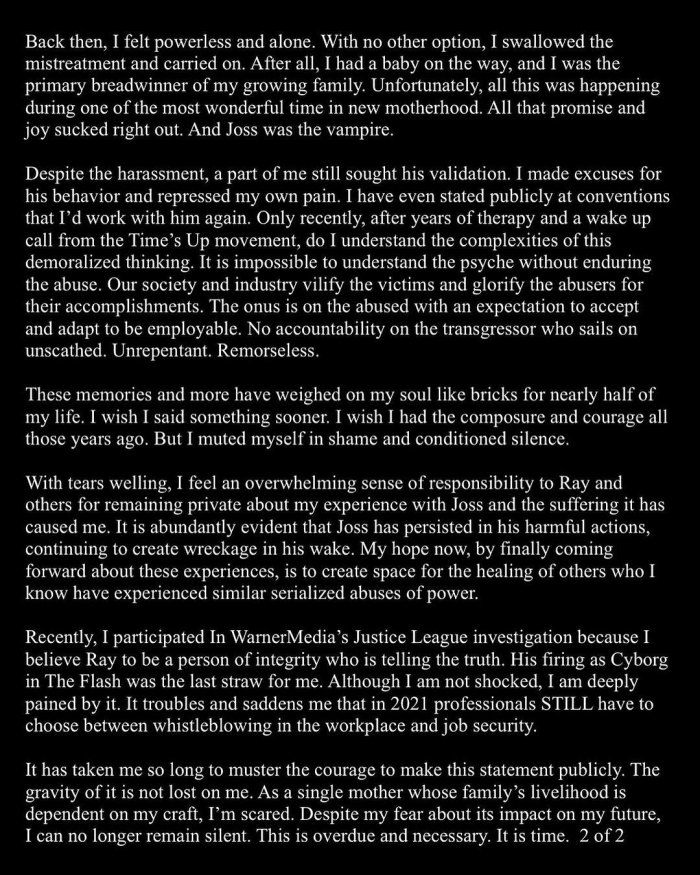 The Las Vegas native wrote, “After all, I had a baby on the way, and I was the primary breadwinner of my growing family. Unfortunately, all this was happening during one of the most wonderful time [sic] in new motherhood. All that promise and joy sucked right out. And Joss was the vampire.”

Us Weekly reached out to Whedon and 20th Television, the production company behind Buffy the Vampire Slayer and Angel, for comment.

Carpenter shared her statement with the hashtag #StandWithRayFisher, a show of support for the Justice League star after he accused Whedon of “gross, abusive, unprofessional and completely unacceptable” behavior in 2020. He also claimed DC president Geoff Johns “enabled” Whedon’s alleged conduct. 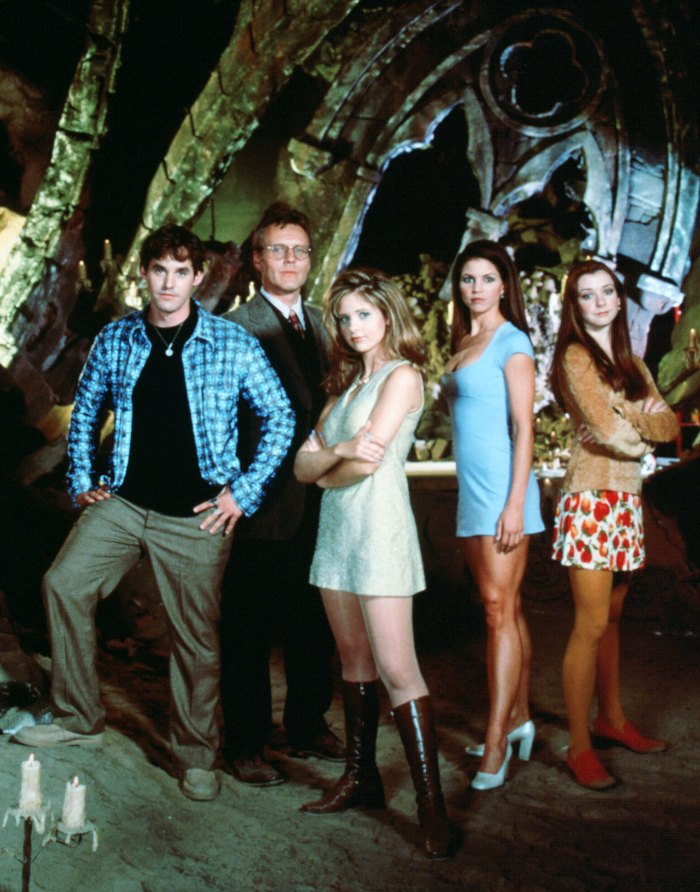 Amber Benson, who played Tara on Buffy, backed her costar’s claims on Twitter.

“Buffy was a toxic environment and it starts at the top. @AllCharisma is speaking truth and I support her 100%. There was a lot of damage done during that time and many of us are still processing it twenty plus years later,” the director, 44, tweeted.

Sarah Michelle Gellar, who played Buffy Summers on Buffy the Vampire Slayer, addressed the allegations against Whedon in a statement on social media on Wednesday.

“While I am proud to have my name associated with Buffy Summers, I don’t want to be forever associated with the name Joss Whedon,” she wrote. “I am more focused on raising my family and surviving a pandemic currently, so I will not be making any further statements at this time. But I stand with all survivors of abuse and am proud of them for speaking out.”