“Amazing news my baby got accepted to the University of Southern California,” the Real Housewives of Beverly Hills alum, 48, tweeted on Tuesday, March 9. “And I didn’t even have to fake any rowing pictures or bribe anyone ???????.”

Heather Dubrow showed Glanville, who also shares 13-year-old son Jake with ex-husband Eddie Cibrian, support on Tuesday, while poking fun at the scandal, which made headlines beginning in March 2019. 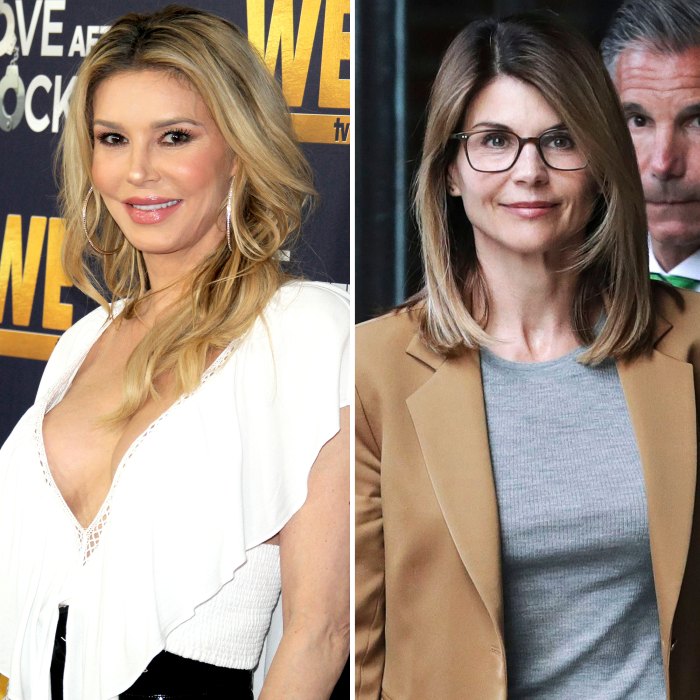 “Congrats!!! THAT IS AMAZING @BrandiGlanville!” the Real Housewives of Orange County alum, 52, tweeted. “Although you’d look good in orange ?❤️.”

Glanville’s comments come two years after Loughlin, 56, and her husband, Mossimo Giannulli, were arrested and accused of paying $500,000 in bribes in exchange for their daughters, Olivia Jade Giannulli and Bella Giannulli, being accepted into USC as recruits of the crew team, although they did not participate in the sport.

A year later, the family made headlines when staged photos of the girls on rowing machines were released by federal prosecutors in April 2020.

“The pictures are obviously extremely inflammatory and controversial, meant to intimidate Lori because she has refused to take a plea deal,” a source exclusively told Us Weekly at the time. “The photos were never submitted to USC as part of the application process.”

The couple pleaded guilty to fraud charges one month later and were sentenced in August 2020. “I made an awful decision. I went along with the plan to give my daughters an unfair advantage in the college admissions process,” Loughlin said during her sentencing hearing. “In doing so, I ignored my intuition and allowed myself to be swayed from my moral compass. While I wish I could go back and do things differently, I can only take responsibility and move forward.”

The Fuller House alum completed her two-month prison stay in December 2020, while the fashion designer, 57, began his five-month stint in November 2020. Us broke the news last month that Loughlin completed her 100 hours of community service, while Mossimo must complete 250 hours upon his release. Us also confirmed in November 2020 that the pair have paid their court-ordered fees in “full.”

Felicity Huffman was also involved the nationwide scandal, paying to $15,000 to improve her eldest daughter Sophia’s SAT scores. She was sentenced to 14 days in prison in September 2019 after pleading guilty to conspiracy to commit mail fraud and honest services fraud.

The Desperate Housewives alum, 58, who also shares daughter Georgia with husband William H. Macy, was ordered to pay a $30,000 fine and complete 250 hours of community service. She completed her prison sentence in October 2019 after only serving 11 days in jail.

“I broke the law. I have admitted that and I pleaded guilty to this crime,” she said in a statement to Us in September 2019. “There are no excuses or justifications for my actions. Period. I would like to apologize to my daughter, my husband, my family and the educational community for my actions. And I especially want to apologize to the students who work hard every day to get into college, and to their parents who make tremendous sacrifices supporting their children.”

Mama June’s daughter Pumpkin, 21, shares rare photo with sister Honey Boo Boo, 15, as she continues to look after her