From costar couple to exes. Ben Affleck and girlfriend Ana de Armas have split, Us Weekly can confirm.

“The breakup was amicable, [but] she was the one who called things off,” a source tells Us. “Ben and Ana were moving in different directions in their lives and stopped seeing eye to eye. The two couldn’t work through their differences and have decided to end their relationship.”

The Oscar winner, 48, and the actress, 32, filmed Deep Water together before sparking romance rumors. The pair were first linked in March 2020 when they were spotted vacationing in Cuba. The twosome were seen “making out” in Costa Rica later that month. Us Weekly then confirmed they were “happy together and officially dating.” 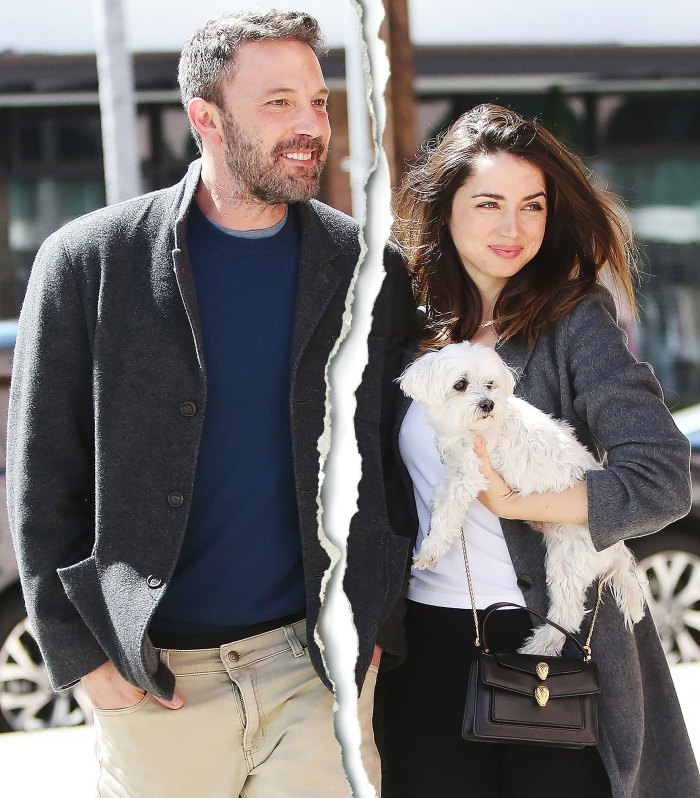 Affleck and de Armas made their relationship Instagram official in April 2020 when she shared a photo of them celebrating her birthday. “Cheers to another great year,” she wrote of the pic, which showed the actor with his hands wrapped around her waist.

The Gone Girl star and the Knives Out actress spent Memorial Day weekend with his three children — Violet, 15, Seraphina, 12, and Samuel, 8, whom he shares with ex-wife Jennifer Garner — in May 2020. “He wants the kids to spend time with her so they can get to know her,” a source told Us at the time.

Us revealed in September 2020 that the duo had taken another serious step. “Ben and Ana basically live together and Ben is very into Ana and so sweet to her,” an insider said. “They are like any couple and sometimes she picks dumb and immature fights with him, but he doesn’t get flustered and they’re never about big issues [or] dealbreakers for either of them.”

Affleck and de Armas returned to the set of Deep Water in New Orleans for reshoots in November 2020. They were spotted kissing passionately and laughing in between takes. While she wore a diamond ring on her left hand, a source told Us the bauble was a prop as they play a married couple in the movie.

The Argo star has been focused on his career. “Ben’s been quiet lately,” an insider noted on January 4. “He’s been working on writing his next movie since October, so he’s hunkered down on that.”

As for his love life, Affleck was married to Garner, 48, from 2005 to 2018. He expressed in February 2020 that he wanted to find someone special with whom he could share his life.

“I would love to have a relationship that is deeply meaningful and one to which I could be deeply committed,” he explained on Good Morning America. “Five years from now Ben Affleck is sober and happy and sees his kids three-and-a-half days a week and has made three or four movies that are interesting to him. I directed two [movies] that he is hopefully proud of and is in a healthy, stable, loving, committed relationship.”

Ben Affleck Through the Years