“I don’t want another young gymnast, Olympic athlete or any individual to experience the horror that I and hundreds of others have endured, before during and continuing to this day in the wake of the Larry Nassar abuse,” Biles, 24, told senators in Washington, D.C. “To be clear, I blame Larry Nassar, and I also blame an entire system that enabled and perpetrated his abuse.”

Nassar, 58, was sentenced to 60 years in federal prison on child pornography charges in 2017, which he is currently serving in Sumterville, Florida. In 2018, he was sentenced to 175 years in Michigan state prison after pleading guilty to seven charges of criminal sexual conduct.

In Wednesday’s testimony, the athletes blamed USA Gymnastics, the US Olympics and Paralympics committee, and the FBI for allowing Nassar’s abuse to continue for years.

Raisman, 27, noted that she felt “like my abuse didn’t count, that it wasn’t a big deal” after speaking to an official. 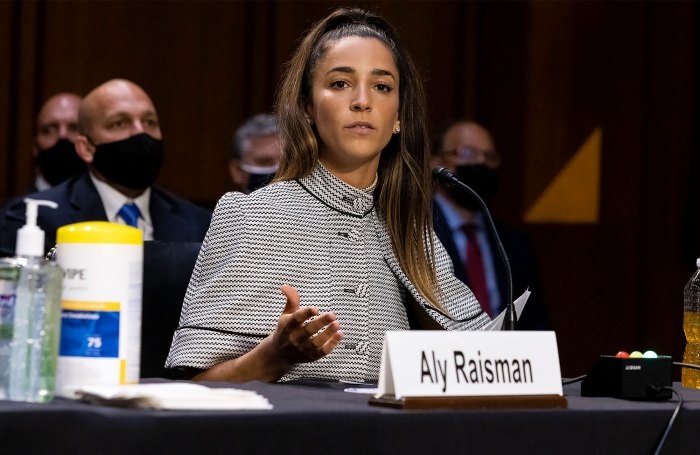 “I remember sitting with the FBI agent and him trying to convince me that it wasn’t that bad,” the Massachusetts native recalled. “It’s taken me years of therapy to realize that my abuse was bad, that it does matter.”

Maroney, 25, recalled a night in Japan where she believed Nassar would kill her if she objected. “I was naked, completely alone, with him on top of me, molesting me for hours,” Maroney told the Senate.

She continued, “I told the FBI all of this, and they chose to falsify my report, and to not only minimize my abuse but silence me yet again. It took them 14 months to report anything, when Larry Nassar — in my opinion — should have been in jail that day.”

Michael Langeman, the FBI agent who interviewed Maroney, and he lost his position with the FBI last week, the Washington Post reports.

Nichols, 24, the first victim to report Nassar, claimed that it took more than a year for the FBI to interview her after she reported the doctor. She also noted that USA Gymnastics told her not to speak out about her abuse.

She alleged that from the day she reported Nassar’s misconduct, she was treated differently by gymnastics officials. “After I reported my abuse to USA Gymnastics, my family and I were told by their former president, Steve Penny, to keep quiet and not say anything that could hurt the FBI investigation,” Nichols told the senators via CNN. “We now know there was no real FBI investigation occurring. While my complaints [were] with the FBI, Larry Nassar continued to abuse women and girls.”

The whistleblower called for answers as to why FBI agents allegedly wouldn’t pursue the issue sooner.