Kids at heart! Aaron Rodgers and his fiancée, Shailene Woodley, packed on the PDA while enjoying a day at Disney World.

The couple were spotted holding hands at Happiest Place on Earth on Saturday, April 3, two months after announcing they are engaged. The Green Bay Packers quarterback, 37, wore a Star Wars shirt, grey shorts and a baseball cap as he walked through the Florida theme park.

The Big Little Lies alum, 29, wore a black turtleneck, high-waisted jeans and a green “dog dad” hat. She topped off her look with glittery Minnie Mouse ears and black boots. The couple sported matching face masks amid the coronavirus pandemic, which read, “May the force be with you.”

The newly engaged pair were seen walking hand in hand in photos published by the New York Post’s Page Six on Monday, April 5. They were also spotted hugging in another snap. 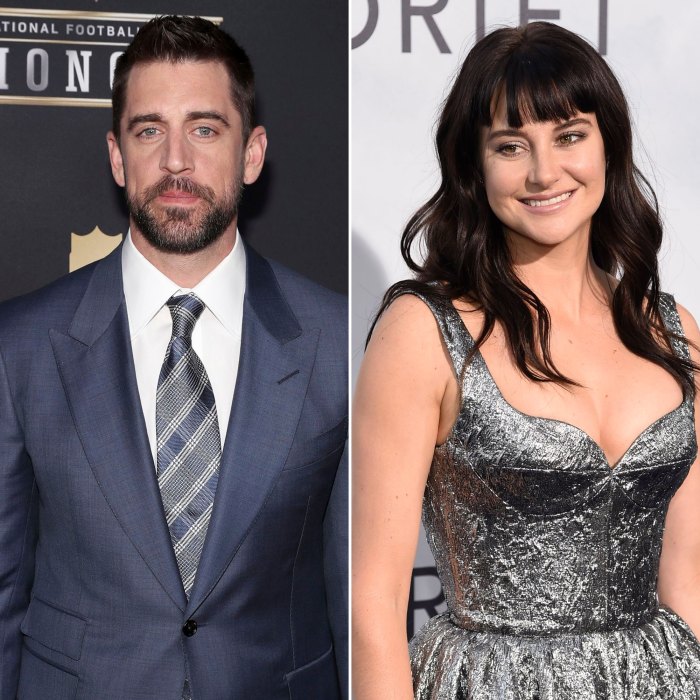 While inside the amusement park, the duo were photographed laughing together and filming something. At one point, the lovebirds were seen linking arms with fellow parkgoers after Woodley changed her mask for a black face covering that read, “I love you.”

The Disney adventure came one week after the NFL star and the actress were spotted for the first time together since news of their engagement broke in February.

Us Weekly confirmed that Rodgers and Woodley jetted off to Arkansas on March 29, where they had a “private luncheon” with executive chef Joshua Egarland at the Best Breakfast Café located in the Best Court boutique hotel in Hot Springs National Park.

“Shailene and Aaron were affectionate with each other and holding hands,” the insider added. “Everyone had a great time.” Hours earlier, the couple were spotted taking a private jet from Costa Careyes, Mexico, wearing casual attire.

Us reported in February that the football player and the Fault in Our Stars actress were dating after they were seen together by sports blog Terez Owens in July 2020. “They started off as friends, but things have turned romantic,” a source told Us, confirming the relationship.

The same month, Rodgers revealed he was secretly engaged while accepting the AP Most Valuable Player award at the NFL Honors awards. He didn’t name Woodley during his speech, but he did give his “fiancée” a shout-out.

The Insurgent star, who split from Ben Volavola in April 2020 after first being linked in 2017, confirmed that she and Rodgers had been engaged for “a while” during an appearance on The Tonight Show Starring Jimmy Fallon on February 22.

“He’s, first off, just a wonderful, incredible human being,” she said of her fiancé, noting she “never” thought she’d be engaged to a football player. “We met during this whacky, whacky time and all the stadiums were closed that he was playing in, so I have yet to go to a football game. I didn’t really grow up with sports, especially American sports. It was never really on my radar.”

Earlier this month, a source exclusively told Us about the pair’s wedding plans, revealing, “Aaron is still thinking about which family members to invite. It’s something that’s weighing heavily on him.”

The former University of California, Berkley, quarterback — who previously dated Danica Patrick from December 2017 to July 2020 and Olivia Munn from May 2014 to April 2017 — has had a rocky relationship with his family over the years. Fans learned about the complicated dynamic when his younger brother, Jordan Rodgers, competed on The Bachelorette in 2016. Aaron also has an older brother named Luke.

“It’ll for sure be a special day and it would be wrong of him to not invite his family, but everyone is aware of their strained relationship and knows that [those] problems aren’t going to get fixed in one day,” the source added. “Whether they decide to come [is] up to them.”

When the pair does tie the knot, the insider revealed that it will most likely be in California because “that’s where the majority of their friends and family live.”