“Independent Women” stand up! From her days in Destiny’s Child and beyond, Kelly Rowland has always served as a major source of inspiration for girls around the globe — and now she’s reigning supreme as Us Weekly‘s latest woman crush.

The “Dilemma” songstress, 40, got her major breakthrough alongside Beyoncé Knowles, LaTavia Roberson and LeToya Luckett in the ’90s girl group before being joined by Michelle Williams to form the Destiny’s Child trio fans know and love. Though they officially disbanded in 2006 after a five-year hiatus, the R&B artists left a major mark on the music industry — and on Rowland’s confidence.

“I feel like as women, we’re always so inspired by each other,” the Grammy winner told Us exclusively. “And I think that a sometimes … we will be so inspired to where we might start to look like someone else instead of embracing what we hold on our own. Whether it’s your curves, whether it’s a long neck or whether it’s a different style [of] hair … rock your own look!”

For Rowland, “it’s so important” to be someone that young women can look up to without feeling pressured to fit a certain mold. But her strong sense of style and unshakeable confidence wasn’t always part of the equation. 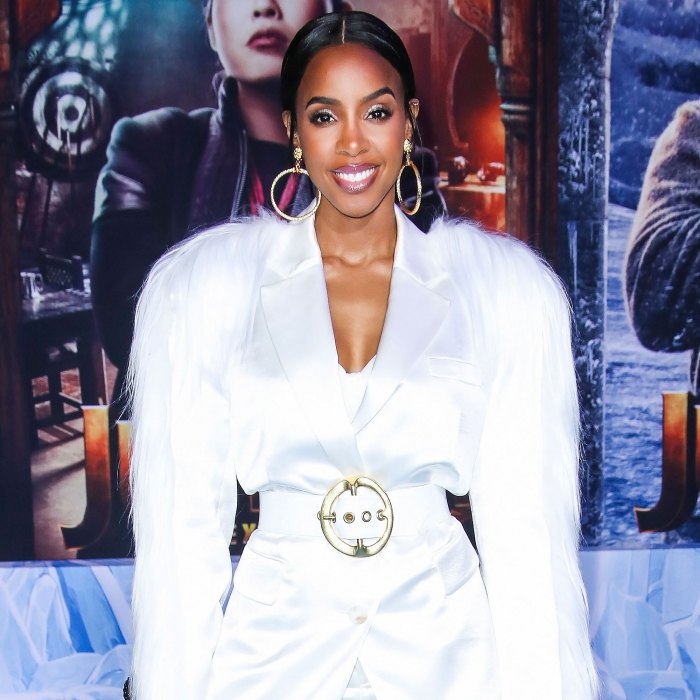 “I remember, even in Destiny’s Child, there was a moment where, as a chocolate girl, I didn’t feel seen,” Rowland recently told Forbes. “Everyone’s doing their part to make it better. … I feel like you should be able to see yourself everywhere, whether it’s on the runways or commercials, you should be able to feel seen.”

Not only has the Georgia native found her voice with a chart-topping career as a solo artist, but she’s also represented strong women in film and TV. When she’s not making moves in the entertainment world, she’s a dedicated partner to her husband, Tim Weatherspoon, whom she wed in May 2014. The duo share two sons: Titan, now 6, and Noah, who was born on January 21.

“This pregnancy is drastically different with this baby than it was with Titan,” Rowland told Us in October 2020, reminding working moms to carve out time for themselves in their busy lives. “The thing about women is that we care so much and give so much to everybody, so I encourage my ladies who are pregnant to please pour back into yourself because you deserve it. You’re carrying life!”

Keep scrolling to find out why Us is crushing on the “Survivor” singer!

1. She Surrounds Herself With Strong Women
From besties Beyoncé and Solange Knowles to her late mother, Doris, the Think Like a Man star said “there are so many women” who inspire her on a daily basis. “The women that are around me. My hairstylist, my assistant, the women that I work with every single day. I’m just grateful for them all,” she explained. “I think we find beauty in each other, and something that we admire about each other, a great quality.”

2. She Believes Every Woman Should Rock Their Own Style
“I feel like as women, we’re always so inspired by each other, and I think that sometimes … we will be so inspired to where we might start to look like someone else instead of embracing what we hold on our own,” Rowland told Us. Whether it’s your curves or your natural hair, the Voice Australia coach thinks confidence comes from within. “Rock your own look! I think it’s so important,” she said.

3. She Fully Embraced Her Pregnancy Bod
Rowland announced in October 2020 that she and Weatherspoon were expecting their second child together, showing off her bare bump in a stunning Women’s Health photo shoot. When it came to feeling the “sexiness” during her pregnancy, the singer followed in Beyoncé’s footsteps. “[She] really inspired me to step up my maternity clothes game,” Rowland told Us. “I just felt this certain sassiness and sensuality this time around.”

4. She’s a Dedicated Mama
Rowland and Weatherspoon welcomed son Noah, their second baby boy, in January 2021. “❤️My Happy Place❤️❤️So grateful ❤️,” she gushed in a sweet social media upload as she cradled her newborn and snuggled with eldest son Titan.

5. She’s Not Afraid to Make Fun of Herself
Not even a wardrobe malfunction can get Rowland down! During an interview with Us, the “Crown” singer recalled one of her more embarrassing moments in the spotlight — but still kept it lighthearted. “I remember I had this really cute little top on and I think I raised my hands up way too high and all you [saw was] boobage,” she joked. “That was so embarrassing and I could not feel it!”